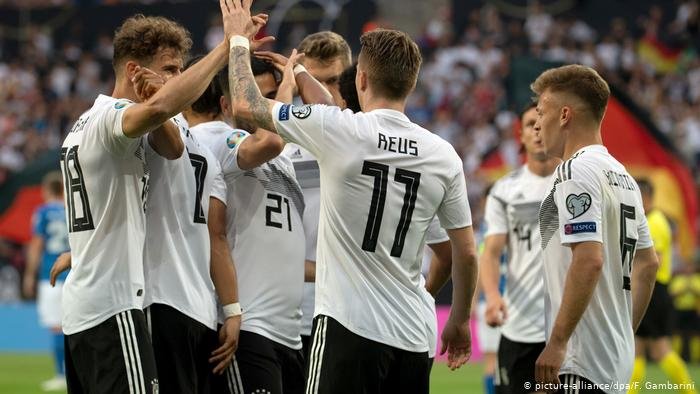 The win ensured the Germans maintain a 100 perfect record to in their Euro 2020 qualifying campaign.

Germany basks in winning form as they sealed their third win from three games in Group C.

Estonia, who went into the match as dark horses, were in disarray as they faced a vibrant and energetic  Germany side that looks hungry for success.

Borussia Dortmund’s attacker Reus opened the floodgates after ten minutes with an assist from Ilkay Gundogan.

The Manchester City midfielder set the pace for first half alongside Bayern Munich’s right back Joshua Kimmich with clever through balls, causing much trouble for Estonian backline.

Gnabry doubled up the lead in the 17th minute with Bundesliga teammate Leon Goretzka extending the lead three minutes later, with a floating ball from Kimmich.

Gundogan, the orchestrator of Gnabry’s goal earlier, made it 4 – 0 for the Germans, scoring from the spot kick after Joonas Tamm hauled Goretzka to the ground inside the box.

Reus rounded up a convincing first-half lead in the 37th minute, scoring the fifth with a fizzing free-kick from 20 metres that found the bottom corner.

Gnabry completed his brace in the 62nd before Timo Werner added the seventh.

Another Manchester City star was on target, to seal the ruthless win, as Leroy Sane who is a transfer target for Bayern Munich, rifled his side’s eighth goal on 88 minutes.