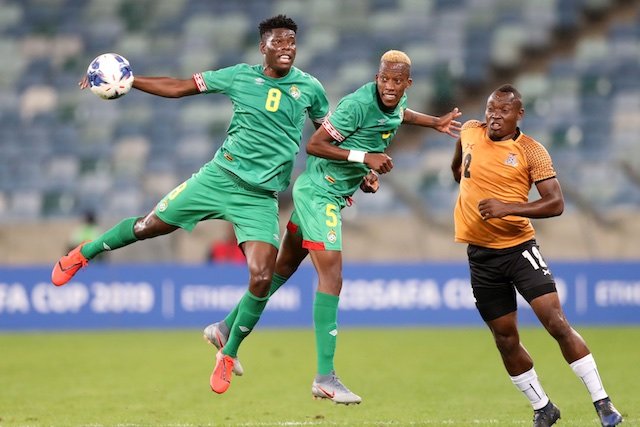 Zambia will meet Botswana in Saturday’s 2019 Cosafa Cup final after the pair won through two keenly-fought semifinal matches at the Moses Mabhida Stadium on Wednesday.

Botswana edged Lesotho 2-1, while Zambia needed penalties to see off old foes Zimbabwe in what was a repeat of the last two Cosafa Cup finals.

The Warriors proved victorious on both those occasions, but this time it was Zambia who came out on top, albeit via the lottery of penalties after the teams had played to a 0-0 draw.

The first real opportunity of the match fell to Admiral Muskwe, who failed to connect with a Divine Lunga cross, but it looked as though the opener would come at the other end.

Zambia were awarded a penalty, but Austin Muwowo saw his effort saved by Zimbabwe goalkeeper Elvis Chipezeze, who bravely got to the ball before Muwowo could stab home the rebound.

Tinotenda Kaderwere, one of the heroes of Zimbabwe’s final win last season, had an excellent chance to win the game late on but fired over the bar from close range when it is seemed easier to score.

Khama Billiat seemed to clip as he took the first penalty for Zimbabwe in the shoot-out and it was saved by Zambia goalkeeper Sebastian Mwange, and when Muskwe skied the Warriors second kick, they were always up against it.

Zambia held their nerve to score all of their penalties and win a place in Saturday’s final, where they will look to lift the regional trophy for the first time since 2013.

Botswana clinched a place in a second ever Cosafa Cup final with a 2-1 victory over Lesotho in a pulsating first semi-final.

They were ahead inside seven minutes as Mothusi Cooper provided the cross and veteran forward Joel Mogorosi headed the ball into the back of the net.

Boy fired a rasping shot into the back of the net to send the Botswana fans wild and the team into the halftime break with a 2-0 lead.

Lesotho came back strongly in the second period though and after Morake had denied them a few more times, Sera Motebang headed home with 10 minutes to play to set up a nervy finish.

Botswana’s only other final appearance was in 2016 when they lost 3-2 to South Africa.

Lesotho will now play Zimbabwe for the bronze medal at the same venue on Friday evening, having also finished third in 2018.

South Africa and Malawi will contest the Plate final at the same venue, in what will be a first Cosafa Cup meeting between the sides since The Flames (Malawi) won a shoot-out on their way to lifting the Plate in 2015.