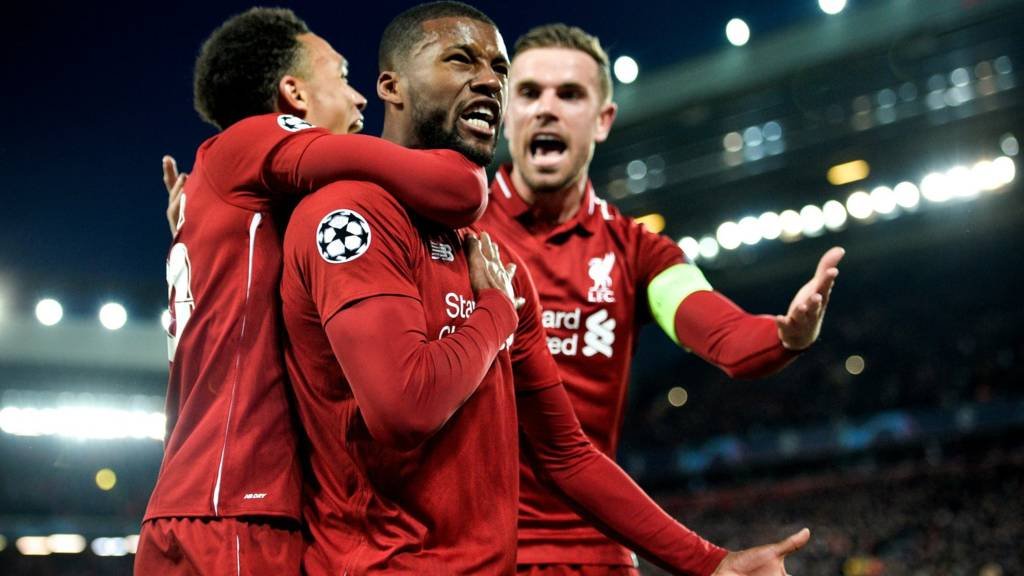 Liverpool advanced to the UEFA Champions League finals after a sensational win at Anfield on Tuesday night. The Reds scored 4 goals past Barcelona, who kicked off the game with a commanding 3 – 0 win against the Premier League outfits to record a 4- 3 aggregate score at the final whistle of the Champions League semi-final second leg tie.

Divock Origi and Georginio Wijnaldum scored a piece to ensure the Merseyside club proceed to the Champions League finals for the second season in a row. Last season, the Kops were bundled out by Spanish giants Real Madrid, with a 3 – 1 win in favor of the Galacticos.

Origi who started the game ahead of unfit Roberto Firmino opened the scoreline after just seven minutes, capitalizing on a poor clearance from Jasper Cillessen and tapping in to ignite a glimpse of hope for the home team. The game ended on 1 – 0 at the stroke of half-time.

Wijnaldum, who came off the bench in the second half scored the second for Jugen Klopp’s side in the 53rd minute, hitting a hard and low shot from the penalty area. He went on to seal his brace two minutes later, scoring a header assisted by Xherdan Shaqiri. The Dutch midfielder rose to the occasion to head home the third of the night for the 18-times Premier League champions.

Origi sealed the decisive winner and completing his brace 11 minutes from normal time to send to wrap up an unbelievable results for Liverpool against Barcelona.

Liverpool win now face Ajax or Tottenham Hotspurs in the final at Madrid on June 1. Ajax face Spurs in the second leg at home with a 1 -0 advantage on Wednesday night. The former has been in scintillating form edging top European clubs including Real Madrid in the round of 16 and Juventus in the quarter finals, to bring Dutch football in the limelight.