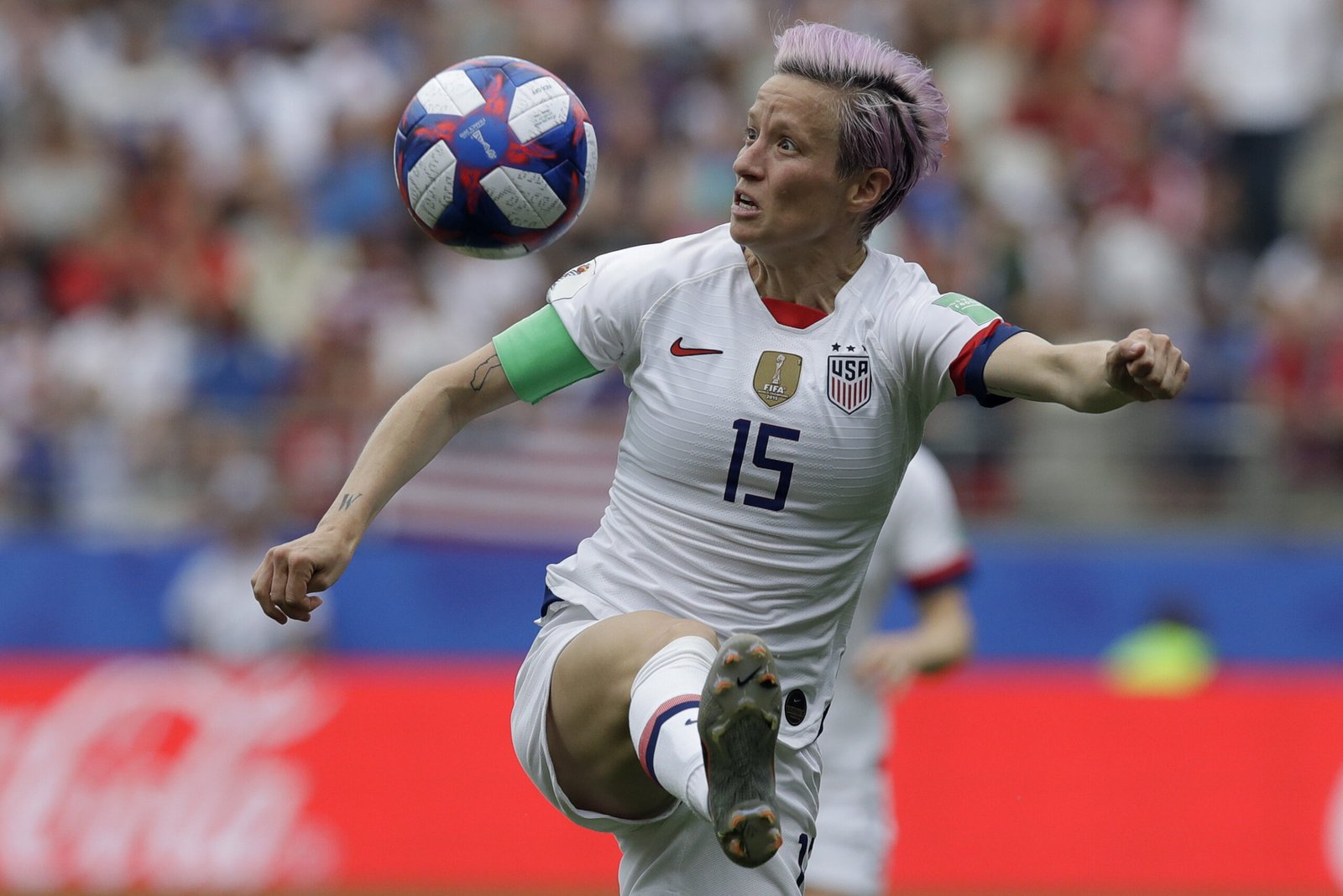 Megan Rapinoe in the field.[Credit/bleacherreport.com]

Her parents are Denise Rapinoe and Jim Rapinoe. Rachael Rapinoe and Brian Rapinoe are among her siblings.

Rapinoe spent most of her youth playing with teams coached by her father until high school.

“She was named to McDonald’s All-American Girls High School Soccer West Team in 2004. Rapinoe played for the under-14 Northern California state Olympic Development Program (ODP) team in 1999, as well as the regional ODP team in 2002”

Megan plays as a winger and Captains OL Reign of the National Women’s Soccer League as well as the United States National team.

She was the winner of the Ballon d’Or Féminin and named The Best FIFA Women’s Player in 2019.

She co-captained the national team alongside Carli Lloyd and Alex Morgan from the year 2018 to 2020.

“She previously played for the Chicago Red Stars, Philadelphia Independence, and MagicJack in Women’s Professional Soccer (WPS), as well as Olympique Lyon in France’s Division 1 Féminine.”

The soccer starlet’s fame is international, best known for her crafty style of play and activism. She is an advocate for numerous LGBT organizations, including the Gay, Lesbian and Straight Education Network (GLSEN) and Athlete Ally.

This has earned her an award named the board of directors Award by the Los Angeles Gay and Lesbian Center.

Megan scored three goals during the 2012 London Olympics and also tallied a team-high four assists to lead the United States to a gold medal.

“Her precise cross to Abby Wambach in the 122nd minute of the 2011 FIFA Women’s World Cup quarterfinal match against Brazil resulted in an equalizer goal and eventual win for the Americans after a penalty shootout. The last-minute goal was awarded ESPN’s 2011 ESPY Award for Best Play of the Year.”

She is also celebrated as the first player in both gender categories to score a goal directly from a corner at the Olympic Games. She bagged the Golden Boot and Golden Ball awards at the 2019 FIFA Women’s World Cup in France.

Megan is one of the female soccer players that bag a whopping payment, thanks to her big talent.

Her net worth as per the year 2021 is an estimate of $3 million (£1.58m). This is according to the Celebrity Net Worth documentation.

Celebrity Net Worth source also reveals that Megan earns an estimated salary of around $168, 000 per annum, roughly the same amount a male Premier League star might earn in a single week.

Being included in Time magazine’s 100 Most Influential People of 2020, Megan definitely has several endorsement deals. The sponsorship deals include Nike, in which she has appeared in several commercials.

Business is another avenue of increasing one’s income and Megan Rapinoe has given it an attempt.

In the year 2019, she co-founded a gender-neutral lifestyle brand, re-inc, with fellow athletes Christen Press, Tobin Health and Meghan Klingenberg.

She has also made an appearance in television spots and print advertisements for Vitamin Water in 2016 and was featured in a Nike commercial that same year with Cristiano Ronaldo.

The duo started dating around the year 2017.

Megan and her spouse Sue Bird own a Seattle Condo and a collection of cars. Other things that Megan has included the recently mentioned Golden Boot and Golden Ball.

The two have maintained a low-key life despite then being among the highest-paid.

Megan has pulled a crowd at her social media platforms. She has 2.2 million followers on Instagram (@mrapinoe) and 927.1 K (@mPinoe) on Twitter. Both accounts are verified.