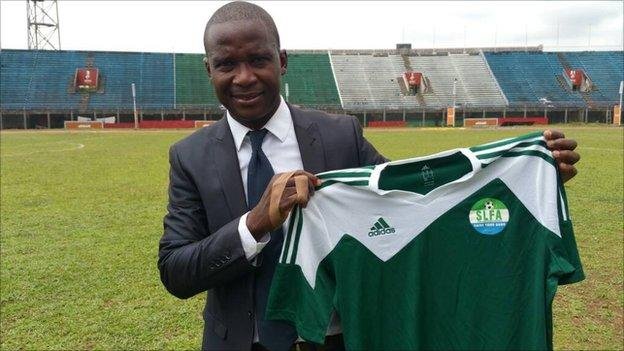 The 49-year-old will be assisted by compatriots Amidu Karim and Dominic Junior Konneh, and have been tasked with guiding the Leone Stars to the Africa Cup of Nations Cameroon 2021.

“We are here representing Sierra Leone and we will do our job the best way in developing our nation’s football,” Keister said at his unveiling in Freetown.

Previously, he was at the helm of Leone Stars in May 2017 after deputising for previous coaches Lars O. Matsson, Johnny Mckinstry and Sellas Tetteh from Sweden, Northern Ireland and Ghana respectively.

Keister, who announced his retirement from active football in 2011, earned 16 caps with the Leone Stars between 1997 and 2003, has experience from the Sierra Leonean youth teams having handled the Under-17 and Under-23 teams.

Meanwhile, Abdulai Kaloga Bah has been appointed head coach of the senior national women’s team while Victoria Conteh, who made history by becoming the first female to coach in the Sierra Leonean top flight after being named coach of East End Tigers in December 2019, will handle the Women’s Under-20 team.

The Sierra Leone Football Association (SLFA) in July cancelled the remainder of its domestic football season due to the novel coronavirus pandemic. The West African nation has so far managed to maintain the spread of the virus relatively well with 1940 total cases and 1496 recoveries.