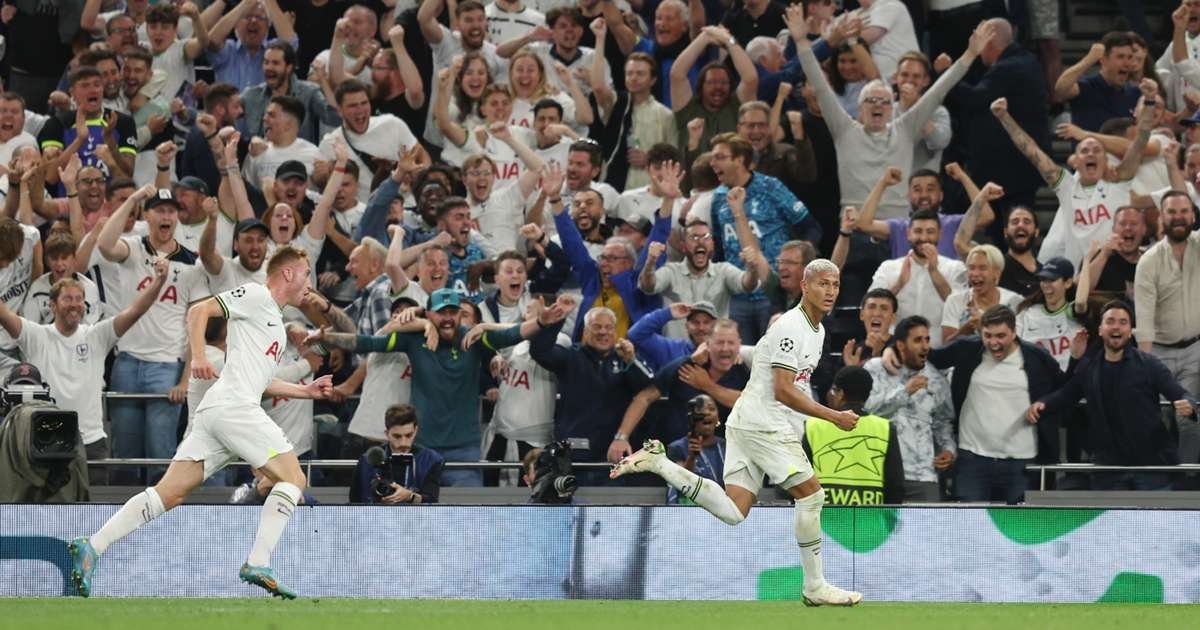 Richarlison scored his first Tottenham goals, scoring twice as Spurs marked their return to the UEFA Champions League for the first time since the 2019-20 season with a 2-0 win over 10-man Marseille on Wednesday.

Spurs started on a slow pace in their first competitive meeting against the Ligue 1 outfit, but their cause was helped significantly just after half-time when Chancel Mbemba was shown a straight red card for a tactical foul.

Antonio Conte’s side took full advantage of that inside the closing 15 minutes as Richarlison twice headed past Pau Lopez to the delight of the Tottenham Hotspur Stadium crowd.

The result means Spurs are level on three points with Sporting CP at the top of Group D after the Portuguese side beat Eintracht Frankfurt 3-0 earlier in the day.

Spurs did most of the pressing in the first half, yet their only opportunity fell to Harry Kane five minutes before the interval, the England captain dragging wide after being played in by Son Heung-min.

Marseille’s hopes of going back to France with a positive result were dealt a blow two minutes into the second half when Mbemba received his marching orders for bringing down a clean-through Son just outside the penalty area.

Substitute Dejan Kulusevski injected some much-needed spark into Spurs’ attack following his introduction on the hour mark, and the new-look hosts went ahead in the 76th minute when Richarlison headed home Ivan Perisic’s cross.

The former Everton man put the result beyond doubt five minutes later with another header – this time from Pierre-Emile Hojbjerg’s cross – that left Lopez with no chance.

Richarlison leads other Tottenham players in celebration after scoring the second against Marseille in the UEFA Champions League. | PHOTO: Getty Images |

After a turgid first half, Mbemba’s dismissal gave Spurs the impetus to push forward and seal a win that gives them a healthy start in Group D.

Marseille, who were more than holding their own before the red card, have now registered just one victory in their past 14 matches against English sides in the Champions League, failing to win each of their past nine such matches, since a 1-0 home win against Chelsea in December 2010.

Richarlison nearly opened his Tottenham account in the weekend win over Fulham, but an offside call cut short his celebrations. There was no denying the £60million man here, though, as he scored both his first Tottenham and Champions League goals to lead his side to a vital three points.

Red cards do not come much more obvious than Mbemba’s. The former Newcastle United defender could not keep up with Son’s run and unceremoniously took him down before he could get into the area. That indiscretion proved costly for his side.

The result means Spurs have won their opening match in a UEFA Champions League campaign for only the second time, also doing so in 2017-18 against Borussia Dortmund, meanwhile Marseille have lost 15 of their last 16 matches in the UEFA Champions League (W1), failing to score in 10 of those matches.

Antonio Conte has ended a run of four games without a home victory in the Champions League (D2 L2), earning his first such win since October 2019 versus Borussia Dortmund with Inter.

Both teams are in domestic action on Saturday, with Spurs visiting Manchester City in the Premier League and Marseille hosting Lille in Ligue 1.