The women’s topflight league storyline has always been changing for Hasifah Nassuna.

She spent the first two seasons, at Kawempe Muslim, being pitted against the achievements of her mother Annet Nakimbugwe, playing at Buikwe She Red Stars, and has now capped eight seasons of football by becoming the first player to score 100 goals in the top division.

Nakimbugwe is a legend of the women’s game here in her own right having belonged to one of the most popular generations that last represented Uganda at the Africa Women Cup of Nations (Awcon) in 2000 and produced household names like Oliver Mbekeka and Majidah Nantanda among others.

Nassuna won that debate fair and square – winning contests between them on the pitch, team trophies, and the most valuable player accolades for both seasons. 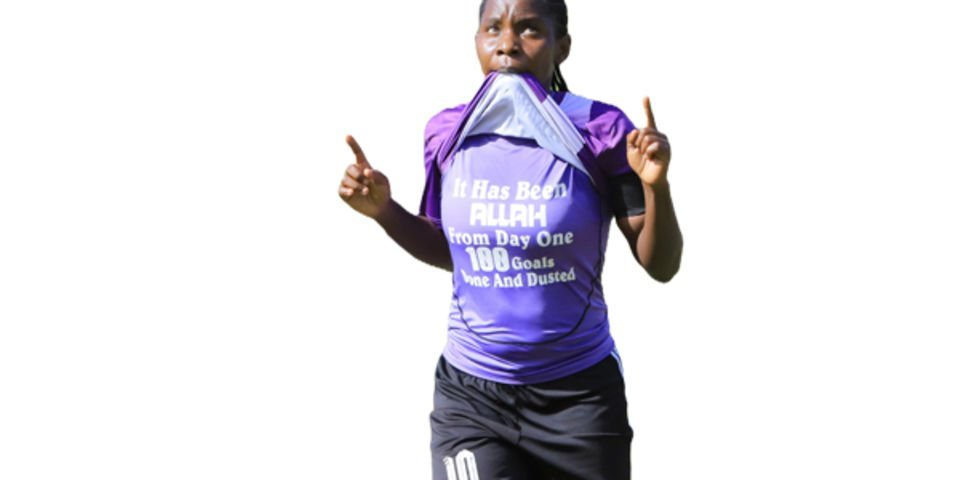 Simply The Best. Nabweteme is in a class of her own as far as scoring goals in women’s football is concerned. Photo/ FUFA MEDIA

“I am happy that she is super talented and that she kept her focus for this long,” Nakimbugwe said in a video released by Fufa to celebrate Nassuna’s 100th goal in seven years of playing in Uganda’s top-flight women’s league.

While at it in her first two seasons, Nassuna was operating in the shadows of her striking partner Sandra Nabweteme as far as scoring goals were concerned.

Nabweteme moved to the US in 2016 and Nassuna was tasked with lifting Kawempe Muslim on her own.

“Hasifah’s strength is involving others in everything she does on the pitch.

She is very humble and works hard. Hopefully, she continues and scores over 500 goals in her career,” Nabweteme said.

Nassuna replied to the post-Nabweteme questions with 26 goals and a third consecutive league trophy before making a move east to Uganda Christian University (UCU) Lady Cardinals, where she proved she was more than just about being in a comfortable environment by winning the league in her second season there. Her UCU career is now 42 goals rich but the latest in a 2-1 loss away to Kampala Queens (KQ) at Islamic University in Uganda (IUIU), Kabojja on Wednesday was the most celebrated.

A thunderous one-minute standing ovation from opponents, teammates, and fans across the divide in Kabojja greeted the signature long-range effort that would on another day have left KQ keeper Prima Mugidde red-faced. Here, she had to applaud.

Nassuna pulled up her shirt to reveal one inscribed with “It Has Been Allah From Day One. 100 Goals Done and Dusted.”

The tributes on social media came from all and sundry. From Fufa president Moses Magogo to her coaches in Kawempe to fellow Crested Cranes teammates, sports journalists, fans, and strangers. She will be going through them forever.

“I am the happiest person today that finally this record has been achieved.

“I definitely wanted it but my fans wanted it more and always asked when it will be achieved.

Here we are now. However, I have never set out to stop at 100 goals.

“I am still hungry for more,” Nassuna, who has scored nine goals in the 2022 season so far and trails defending top scorer Fazila Ikwaput by four goals, said.

As night follows day, this journey that started on February 15, 2015, with a brace in a 7-0 win over Kakira Women will definitely be stretched further. Only God knows how far.

the most in a single match; 5

-2 in Njeru on a neutral ground