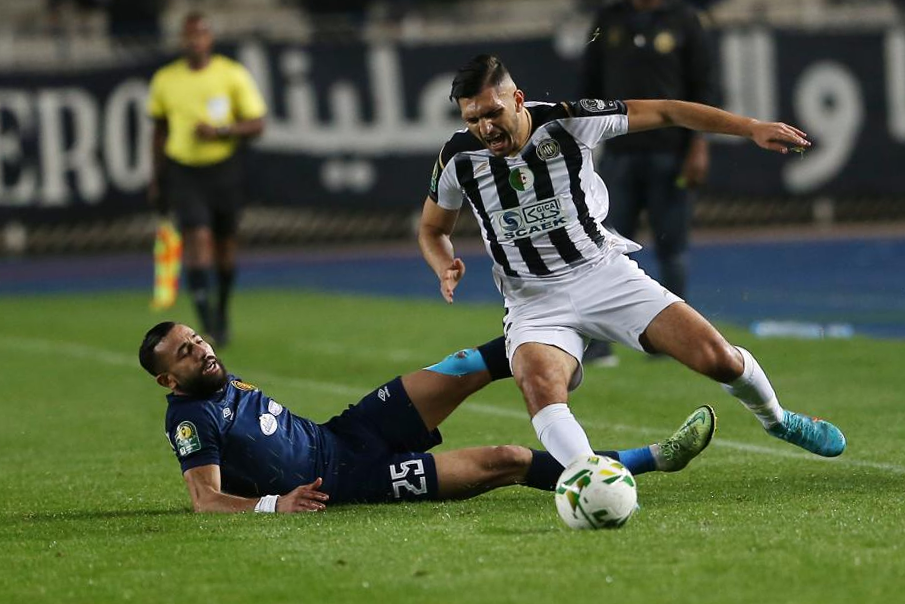 Action between Setif and Esperance

ES Setif’s new Serbian coach Darko Novic was off to a flying start in his first match in charge as ES Setif stunned four-time winners Esperance of Tunisia 1-0 at home to progress to the semi-final of the CAF Champions League.

Novic was hired last week and his first match in charge was a baptism of fire against Esperance at their backyard in Rades, and he delivered a tactical masterclass to see off the home side and book their first semi-final slot since 2018.

“It was a tough and very difficult match but we had promised something before we came here. We promised that we will come here and try to win and we did it,” said the tactician.

On his tactical plan for the game Novic said; “We knew that they are very strong in the middle and their wingers are very talented. So we needed to be compact and ensure we don’t give them space and time on the ball. They have a very good team and if you allow them space they will hurt you.”

Abdelmoumene Djabou scored the lone goal in the 21st minute, handing the Algerians a win on the road to go through 1-0 on aggregate after the first leg in Algiers ended barren last week.

Heading in to the return fixture in Rades, Setif needed in the least a scoring draw to take them through, but they stepped up one better to pick a win on enemy soil and progress to the last four for the first time since 2018.

Djabou broke the deadlock in the 21st minute with a neat finish. The forward waded past the keeper to tap into an empty net after being fed by brilliant Riyad Benayad through ball after he pickpocketed Abdelkader Bedrane at the edge of the box.

Before the goal, Setif had shown intent with Ahmed Kendouci heading just over after Benayad had lifted an inviting cross from the right.

But, Esperance tried to build on from the disappointing start and the best chance of the opening half fell on Hamdou Elhouni who curled in a shot inches wide after cutting in from the right.

In the second half, it was all Esperance as the Tunisian side piled in the pressure. But, Setif keeper Sofiana Khedairia stood tall in between the sticks to ensure the scores remain 1-0 in his side’s favour.

He made a brilliant save to deny Ben Hammouda’s header before Nigerian import Anayo Iwuala headed another chance inches wide. The keeper made another full flight save to deny Elhouni.

Esperance boss Radhi Jaidi made changes bringing on burly forward Kingsley Eduwo and his presence offered fresh trouble for Setif. The Nigerian had a goal in the 66th minute but was flagged down for offside.

Two minutes later, Esperance were denied by the upright, this time Ghaylen Chaaleli coming off the woodwork after sending in a low shot from the edge of the box. In the 79th minute Chaaleli played a quick one-two with Eduwo, but his effort from a tight angle rolled wide.

Esperance poured in absolutely everything in attack, but Setif defended with their lives to keep their hopes of a third Champions League title firmly within their reach.