Grealish and Savic involved in physical scuffle with Police intervening 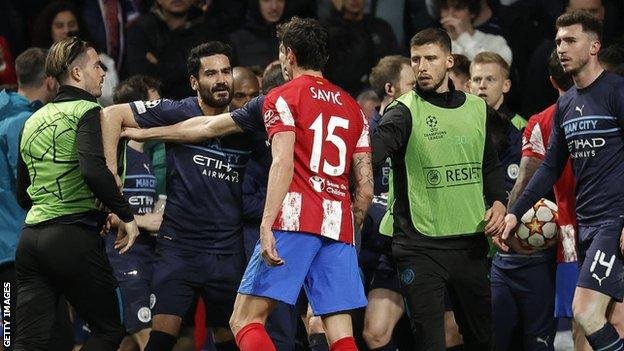 Jack Grealish is said to have been involved in a ‘physical fracas’ with Atletico Madrid defender Stefan Savic in the tunnel following Manchester City’s progression to the UEFA Champions League semi-finals.

The incident occurred following a fiery game at the Wanda Metropolitano. Tempers boiled over at the end of the quarter-final second leg, with Felipe seeing red for a bad tackle on Phil Foden.

Grealish – an unused sub on the night – had had an altercation with Savic during the incident in which Felipe was sent off, with footage showing the defender had pulled Grealish’s hair on the touchline after the pair exchanged words.

The animosity between the two then continued after the full-time whistle, as BT Sport reported that the two were involved in a scuffle in the tunnel and eight police were tasked with intervening.

Atletico Madrid defender Stefan Savic was at the centre stage of the fracas in the match between his side and Manchester City on Wednesday night. | PHOTO: Getty Images |

Atletico Madrid full-back Sime Vrsaljko was also part of the ruckus. Footage that has emerged shows the defender throwing an object at the Man City backroom staff in the tunnel.

Speaking after the game, Man City’s John Stones was keen to focus on the football on the night, stating: “We know that they sometimes try and make things happen like that and we dealt with it really well.

“It is not nice to talk about and I don’t want to dwell on it because over the two legs we played incredibly against such an experienced side in what they do, we kept our tempers and it is easy to get drawn into stuff like that.

“We knew it was not an easy place to come, it is a hostile environment, it was a difficult night all round and how we defended and controlled ourselves over the two legs was incredible.

“Phil [Foden] was such a threat in both games, instant impact in the first and how he drove us up the pitch tonight, gained yards and free-kicks – I think he is feeling it now.”

Manchester City will face Atletico’s neighbours Real Madrid in the semi-final with the first leg scheduled to take place between 26 and 27 April.