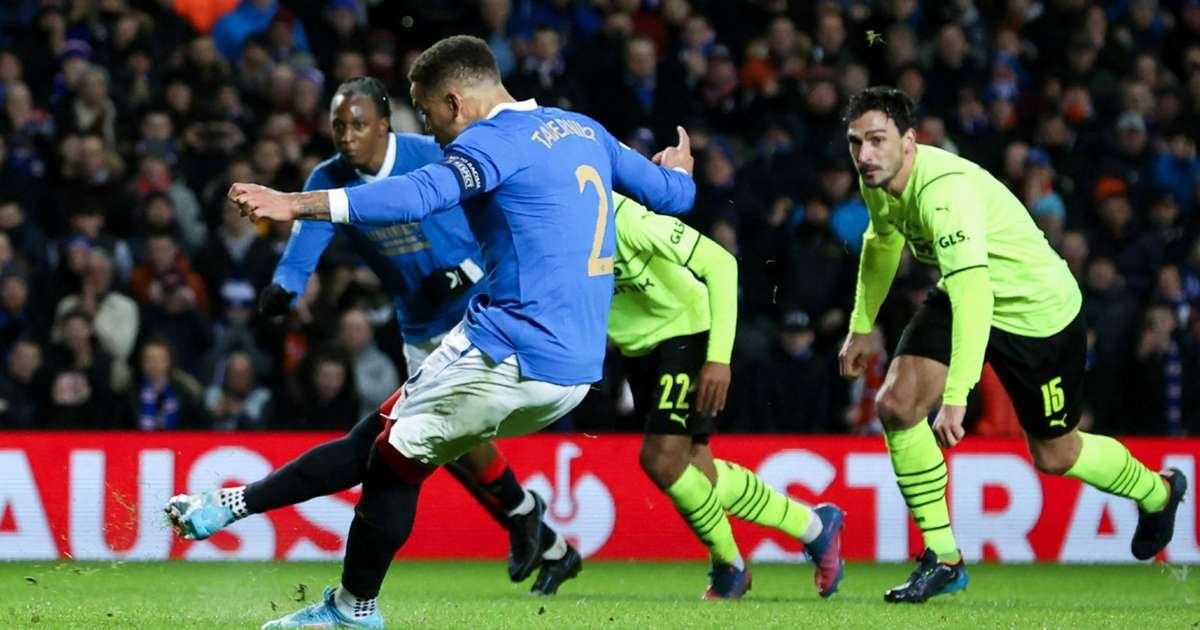 Rangers booked their place in the Europa League last 16 with a 2-2 draw against Borussia Dortmund, which sealed a 6-4 aggregate win, as Tavernier scored twice.

A week on from their brilliant 4-2 triumph at Signal Iduna Park, Rangers had their captain to thank as they secured progression on a frantic night in Glasgow.

Tavernier opened the scoring from the spot in the 22nd minute, but the excellent Jude Bellingham equalised for Dortmund before Donyell Malen put the visitors ahead. 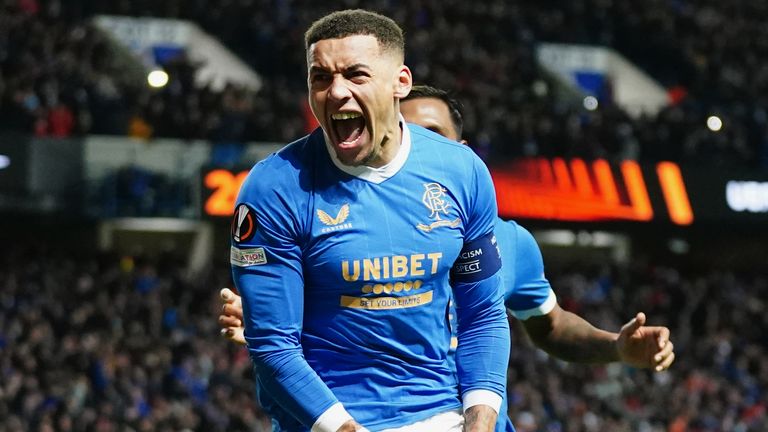 Rangers’ resolve returned in the second half, though, with Tavernier drilling in his second just before the hour to end BVB’s Europa League hopes.

Bellingham had hit the post as Dortmund looked to deflate the raucous atmosphere at Ibrox, but having withstood the early pressure Rangers went ahead – Tavernier slamming a penalty down the middle after Julian Brandt fouled Ryan Kent.

Brandt wasted a chance to make immediate amends, but Bellingham restored parity when he slotted in after pouncing onto Connor Goldson’s poor touch.

Scott Arfield and Alfredo Morelos went close for Rangers before Allan McGregor brilliantly denied Malen at the other end in the space of a minute.

McGregor had no chance when Malen prodded past him in the 42nd minute to put Dortmund ahead, however.

Gregor Kobel got down to Morelos’ goal-bound shot after the restart, but BVB were made to pay for more dismal defending when Tavernier lashed in at the back post from Joe Aribo’s cross.

Dortmund seemed set to regain their lead when Marco Reus rounded McGregor but sliced into the side-netting.

Instead, Rangers were in delirium when Morelos raced through and squared for Kent to tuck in, only for referee Antonio Mateu Lahoz to harshly disallow the goal for a foul on Emre Can after a VAR check, although it ultimately mattered not.

Dortmund bounced back from the first-leg defeat by thrashing Borussia Monchengladbach 6-0, but once again shorn of star forward Erling Haaland their frailties were exposed at Ibrox.

Indeed, they were fortunate that the referee was not shown an angle by the VAR that would have proved Morelos did not foul Can, so at the very least BVB avoided losing both legs of a knockout tie in the Europa League/UEFA Cup for what would have been only the second time.

Dortmund were considered one of the favourites, yet they were deserved losers over the two legs. Rangers became the first side to score at least five goals against Dortmund in a two-legged European knockout tie since Monaco in 2016-17.

Bellingham was a one-man show in the first half, driving Dortmund on from midfield, scoring a goal and playing a key role in Malen’s.

However, the England international – who had three shots and created as many chances – could not propel Dortmund into the last 16.

Marco Rose’s focus now has to be on attempting to push Bayern Munich all the way in the Bundesliga, but he must surely rectify at least some of Dortmund’s many defensive issues.

Time and time again they were caught out by the tenacity of Morelos, the bombarding Tavernier or Kent’s pace. The latter twice got through on goal late on only to take a heavy touch and instead try an ambitious shot. Of course, Can was also hugely fortunate to get away with his mistake.

Dortmund makes a trip to Augsburg in the Bundesliga on Sunday, while Rangers take on Motherwell in the Scottish Premiership – although they will first have an eye on Friday’s Europa League draw.