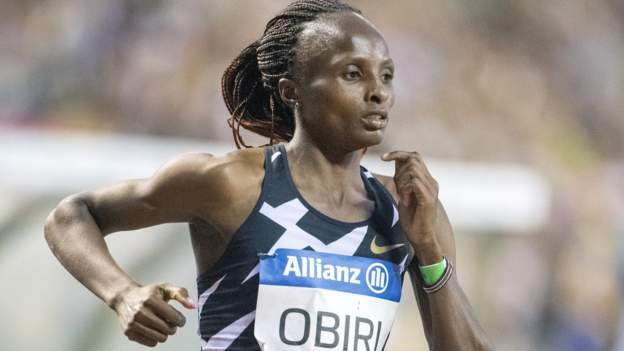 The 2022 Ireland International Cross Country event went down on Sartuday 22nd of January in Dundonald with different athletes from all over the world competing despite the restrictions that have been put in place by different countries to curb the spread of Covid-19.
The event was part of the World Athletics Silver Cross Country Tour, which also incorporated the Celtic Games, Home Countries International, and British Athletics Cross Challenge.
Kenya’s Hellen Obiri and Zak Mahamed cruised the Women’s and Men’s cross country competition with Obiri clocking 26 minutes and 44 seconds to dominate the women’s 8km race in what she thought was a very good preparation in the push to defend her World 5000m title in Eugene, Oregon, later this summer. 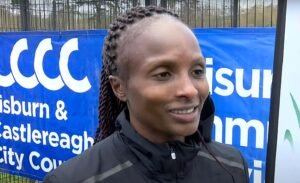 “It’s my first time running cross-country here,” said Obiri. “The course was challenging but I am used to doing cross country and it’s all part of my preparation ahead of the summer season.”
She is also looking forward to retaining her Commonwealth Games crown. The 32-year-old won gold medals in the 5000m at the past two World Championships.
“God willing I will be at the Commonwealth Games in Birmingham as I am (defending) champion there.” Added Obiri.
Obiri who won the World Cross Country title at the last edition in 2019, broke away from the field early in the race and never looked back as she continues to show progress in her quest to transition to road racing.
She holds the Kenyan National Record for the mile, 3000 meters, and 5000 meters events.
On 30 March 2019, she won the women’s senior race at the IAAF World Cross Country Championship. The event took place in Aarhus, Denmark. She won the 10.2 km race in a time of 36:14.
Obiri was cited as one of the Top 100 most influential Africans by New African magazine in 2017.
She represented Kenya at the 2020 Summer Olympics where she won the silver medal in the 5000 meters event, finishing behind Sifan Hassan.
On the other hand, England’s Zak Mahamed won the men’s 10K race clocking 29:49.
“The course was tough,” Mahamed said, but “I really enjoyed the course because I was here two years ago (for the) U20, so I love it.”
Mahamed, who was a top-10 finisher in the European Cross Country Championships in Dublin before Christmas, managed to fend off the challenges from Italian Iliass Ouani (29:56) and Scotland’s Stuart McCallum (30:03) to break clear over the final lap to secure the win.
Hannah Irwin of Northern Ireland finished strongly to overtake Scottish runner Mhairi MacLennan in a sprint to the line to finish in second place, 20 seconds behind Obiri with the latter running 27:07. They were followed by Eleanor Bolton, European under-20 champion Megan Keith, Kate Avery, and Jess Gibbon. 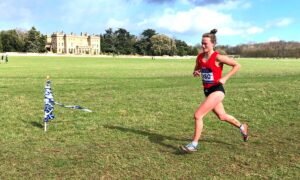 In the age group races, Hannah Ryding of Giffnock North won the under-20 women’s race ahead of Louisa Brown of Garscube. The under-17 women’s race – which was held along with the under-20 event – saw Northern Ireland’s Lucy Foster take the win ahead of Beca Brown of Wales.
Sam Mills of Exeter outsprinted Ireland’s Dean Casey and Scott Fagan in the under-20 men’s race. Behind, the top three under-17 men were all Scottish with Connor Bell ahead of Corey Campbell and Craig Shannon.
The under-15 girl’s race was won by Freya Woodhead of Bideford while Jamie Wallace of Mullingar Harriers took the under-15 boys race.
Under-13 victories meanwhile went to Emer McKee of Willowfield Harriers and Callum Dick of Giffnock North.
Leading results
Men’s 10km
1 Zak Mahamed (GBR) 29:49
2 Ilias Aouani (ITA) 29:56
3 Stuart McCallum (GBR) 30:03
4 Hugo Milner (GBR) 30:14
5 Jack Millar (GBR) 30:26
Women’s 8km
1 Hellen Obiri (KEN) 26:44
2 Hannah Irwin (GBR) 27:04
3 Mhairi Maclennan (GBR) 27:07
4 Eleanor Bolton (GBR) 27:21
5 Megan Keith (GBR) 27:25