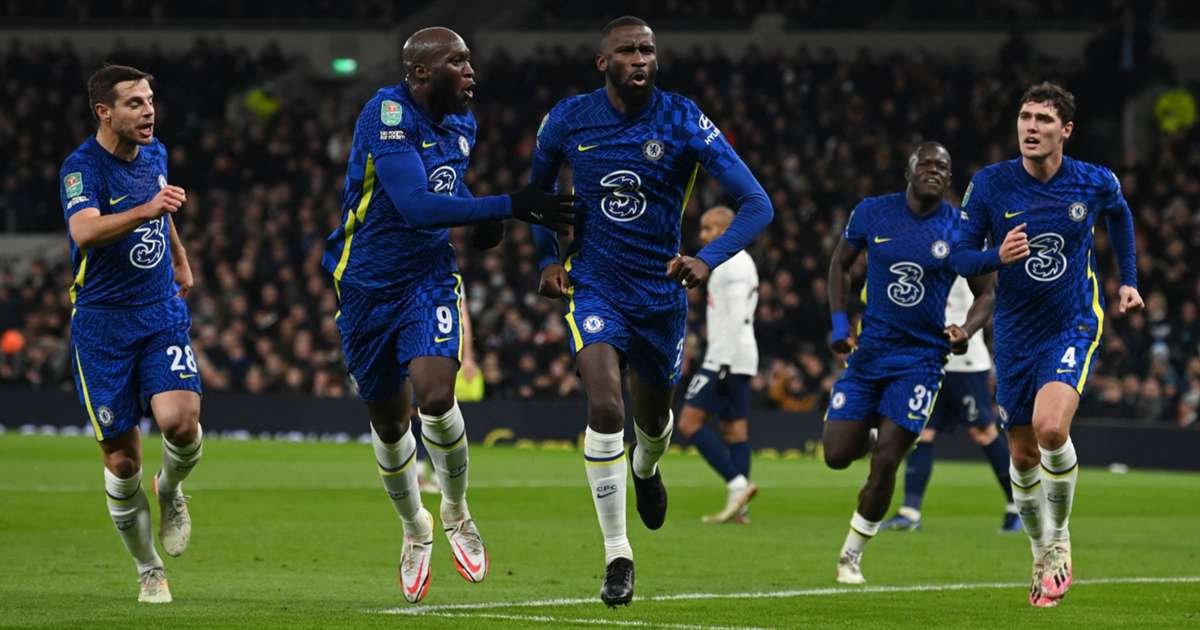 Antonio Rudiger scored the only goal of the game as Chelsea beats London rivals Tottenham 1-0 in the second leg to seal their place in the EFL Carabao Cup final.

The Blues put themselves well on their way to Wembley by winning the first leg of the all-London semi-final 2-0 and they finished off the job at Tottenham Hotspur Stadium on Wednesday night, thanks to Rudiger’s goal.

Rudiger’s first-half header gave Thomas Tuchel’s side a three-goal cushion and there was no way back for Spurs, who endured another frustrating evening as referee Andre Marriner overturned two penalty decisions he wrongly awarded to Antonio Conte’s side, while VAR also ruled out what would have been Harry Kane’s 250th goal in club football to deny Spurs’ any goal.

Antonio Rudiger headed home in the first half to give Chelsea the lead in the second leg of the Carabao Cup semi-finals against Tottenham Hotspur. | PHOTO: Shaun Botterill/GettyImages |

Chelsea will go in search of a second trophy under Tuchel in just over a year when they face either Arsenal or Liverpool in the final on February 27.

Romelu Lukaku came close to increasing the European champions’ advantage when he shrugged off Ben Davies, but Spurs shot-stopper Pierluigi Gollini spread himself to keep out the striker’s left-foot drive.

Gollini was at fault for the opening goal 17 minutes in, though, failing to deal with a Mason Mount corner and the powerful Rudiger rose highest to head home his second goal at Tottenham this season.

Antonio Conte’s side hopes of pulling one back were dashed when the VAR told Marriner to change his decision after he had awarded a penalty for a foul on Pierre-Emile Hojbjerg, but Rudiger had made contact outside the box.

Marriner got it wrong again when he pointed to the spot early in the second half, the official discovering on the pitchside monitor that Kepa Arrizabalaga had made contact with the ball first when he came out to deny Lucas Moura.

There was yet more frustration for the home side when Kane finished home, but the England captain had strayed offside.

The VAR denied Harry Kane a goal in the second half for offside. | PHOTO: Chris Brunskill/Getty Images |

Play was then paused late on due to a medical emergency in the crowd but, upon its resumption, Chelsea cruised through added time untroubled to take their place in the final.

The win at North London made it 11 matches without defeat for Chelsea and Tuchel is the eighth different boss to lead an English team to the final of both major domestic competitions, and the European Cup/Champions League. Bob Paisley, Brian Clough, Alex Ferguson, Rafael Benitez, Arsene Wenger, Avram Grant and Pep Guardiola are the others to achieve that feat.

Tottenham’s 14-year wait for a trophy goes on, with the FA Cup representing their only hope of finally getting their hands on some silverware this season. Chelsea, meanwhile, has progressed from all 14 two-legged ties in cup competitions after winning the first tie.

Making a rare start, Spurs goalkeeper Gollini made a good save to thwart Lukaku, one of two stops he made in the match, but the on-loan goalkeeper failed to command his area when Mount swung in a corner and he was punished by Rudiger.

Spurs fans may have been questioning why Hugo Lloris was watching on from the bench, but much of the damage had been done in the first leg.

Chelsea faces a huge Premier League tie away to leaders Manchester City on Saturday in what is a must-win for the Blues, while Spurs take on fierce rivals Arsenal at home on Sunday.