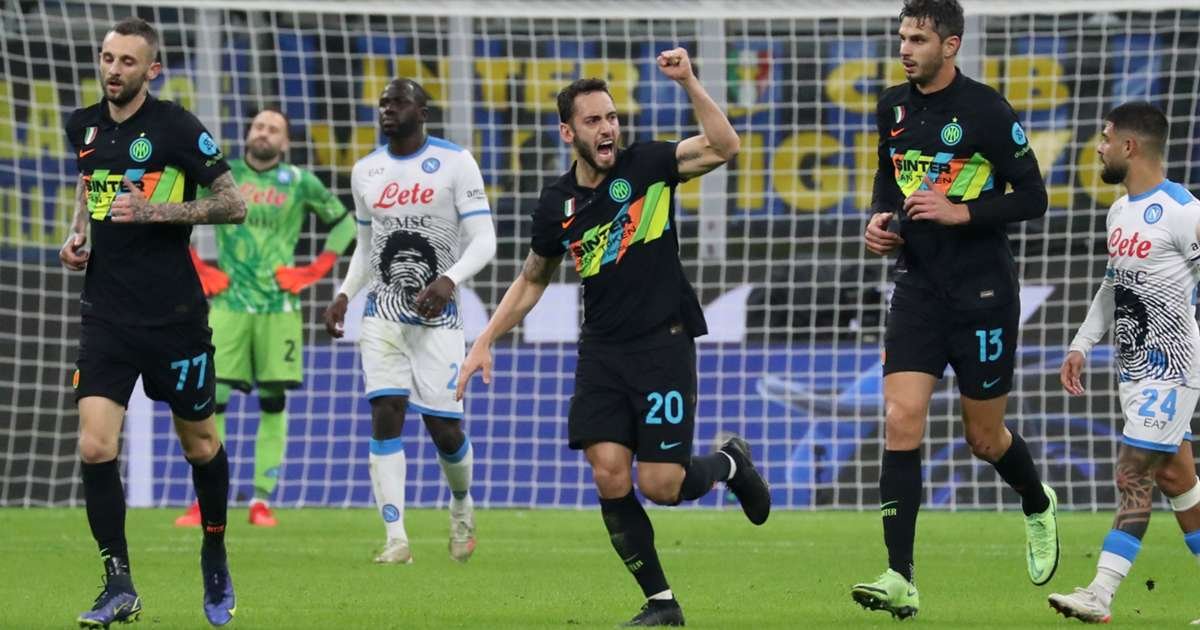 Serie A reigning champions Inter Milan handed early league leaders Napoli their first defeat of the season as Hakan Calhanoglu recorded a goal and an assist in a 3-2 home victory on Sunday evening.

Napoli had not scored in any of their past four away league games against the Nerazzurri but Piotr Zielinski netted their first since April 2017 after 17 minutes to open the scoring chart at San Siro.

Summer signing Calhanoglu soon levelled from the penalty spot before assisting Ivan Perisic’s header that put Inter into the lead before the interval.

Lautaro Martinez added a third just after the hour mark and, despite a wonderful strike from substitute Dries Mertens, the reigning champions triumphed to close the gap on Milan and Napoli to four points at the summit, ending the visitors’ 21-match unbeaten Serie A run in the process. 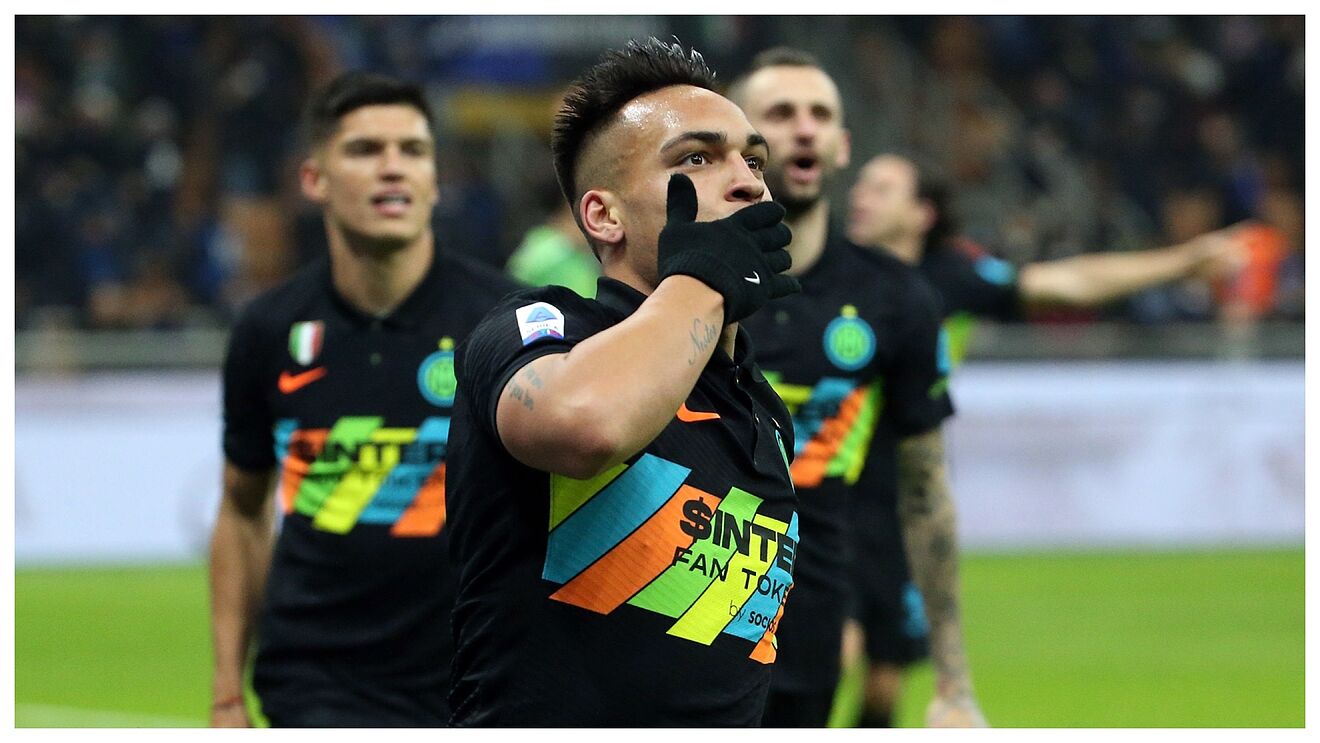 Inter forward Lautaro Martinez celebrates after scoring the third against Napoli in a Serie A clash on Sunday, 21 November 2021 at the San Siro. | PHOTO: Marca |

Martinez headed over as the highest scorers in the division looked to strike first against a defence that had conceded just four goals this term.

However, it was Napoli who took the lead when Zielinski arrowed into the top-right corner from the edge of the area following Lorenzo Insigne’s offload.

That advantage lasted only for eight minutes as Calhanoglu rolled his spot-kick into the bottom-left corner after VAR deemed Kalidou Koulibaly to have handled Nicolo Barella’s effort.

Calhanoglu turned provider for Inter’s second as Perisic flicked the Turkey international’s corner past David Ospina a minute before half-time.

Napoli’s task mounted further when Martinez drilled into the bottom-left corner after Joaquin Correa’s pass on the counter.

Inter seemed set for a comfortable victory until Mertens fired into the top-left corner after Koulibaly dispossessed Edin Dzeko, though the hosts managed to cling on thanks to Samir Handanovic tipping Mario Rui’s late header onto the crossbar.

Napoli, who have now not defeated Inter in five Serie A games, were unbeaten in 21 top-flight matches – dating back to last April – but Inzaghi’s side responded brilliantly to going a goal down early.

With Milan also missing out against Fiorentina, Inter move within four points of their city rivals and Napoli after 13 games, while Inzaghi managed his first win against sides who finished in last season’s top seven with his fifth attempt.

Since his debut in 2017-18, Calhanoglu has managed at least a goal and an assist on 10 occasions in Serie A – the most by any midfielder in the league in that period.

The 27-year-old produced a game-high three key passes in yet another classy showing that will make Milan regret ever letting the playmaker join their neighbours.

Mertens only came on in the 75th minute but immediately influenced the game as he rifled in from range three minutes after his introduction. 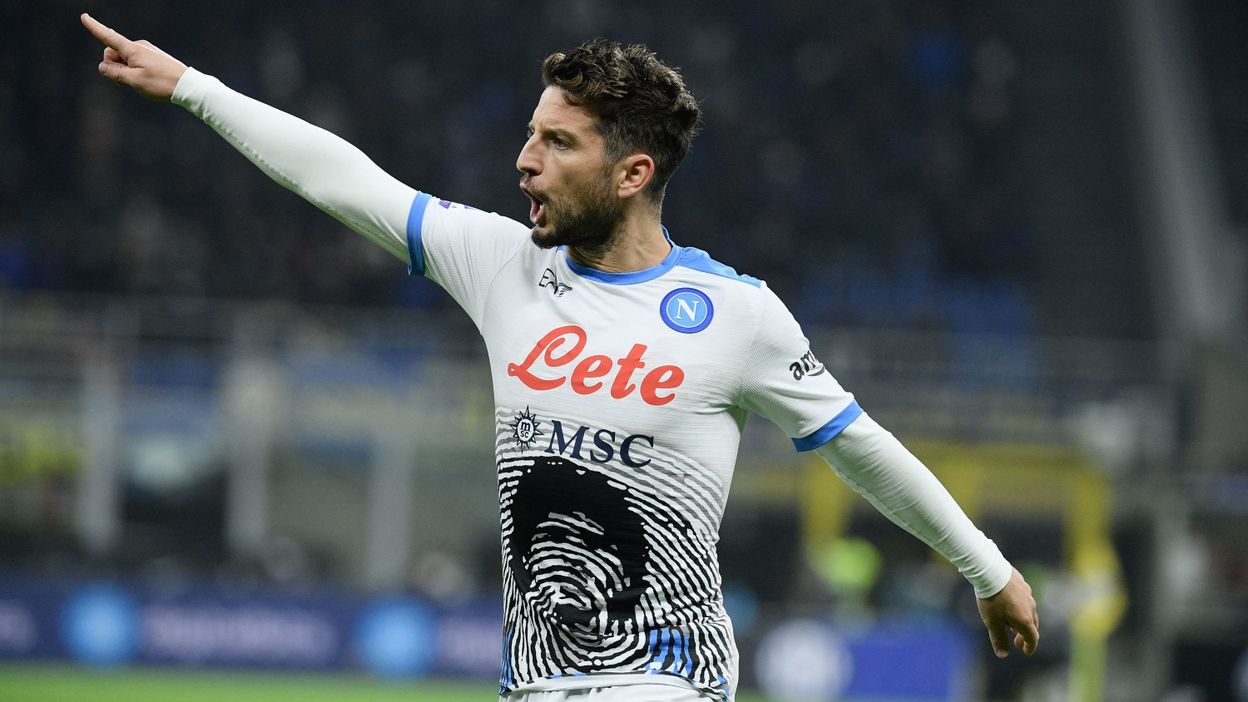 Napoli forward Dries Mertens reacts after netting against Inter at the San Siro in the Serie A meeting. | PHOTO: Getty Images |

That was the Belgium international’s 103rd goal for Napoli in Serie A, making him their top scorer in the Italian top flight after overtaking former forward Antonio Vojak.

Inter travel to Shakhtar Donetsk in Wednesday’s Champions League clash before visiting Venezia on Saturday. Napoli on their side, makes a trip to Lokomotiv Moscow on Wednesday in the Europa League, with Lazio making the trip to Naples four days later.