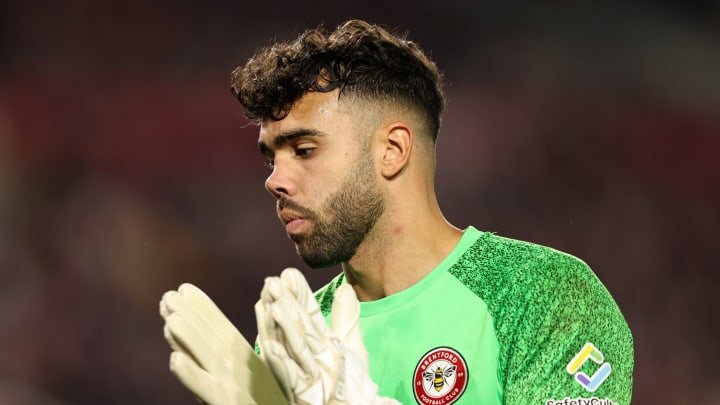 Brentford football club has confirmed goalkeeper David Raya will miss between four and five months of Premier League action after he suffered a serious knee injury in the 2-1 defeat to Leicester City on Sunday in a League meeting.

The 26-year-old has been a key figure in the Bees team and has starred with his shot-stopping and passing ability throughout their opening nine matches of the season. However, he picked up a knock in the dying minutes of the clash with the Foxes and it has turned out to be a serious one, the London club has confirmed.

Brentford goalkeeper David Raya will miss up to five months of the Premier League season due to a knee injury. | PHOTO: Marc Atkins/GettyImages |

The club has revealed Raya sustained an injury to the Posterior Cruciate Ligament in his left knee, and while he shouldn’t require any surgery to overcome the issue, he will be kept out of action for at least four months.

“David has unfortunately sustained an injury to the Posterior Cruciate Ligament in his left knee,” explained Neil Greig, Brentford’s head of medical.

“The issue will require a prolonged period of time to heal and for David to then regain function and strength around the joint.”

“Positively, this type of injury usually heals well without the need for surgery. David has already begun using a brace specifically designed to aid this process.

“We anticipate the recovery period for an injury like this to be somewhere between four and five months, which will enable David to be back to his previous high levels well before the end of the season.”

Raya suffered the injury in a collision with Leicester substitute forward Ayoze Perez as the pair rushed to arrive first to the ball. The Spaniard’s subsequent absence over the next few months could cause some problems for coach Thomas Frank, with the Bees aiming to secure survival in their debut Premier League campaign.

Brentford has been a breath of fresh air in the top flight, kicking off the season with a brilliant victory over Arsenal. They’ve also drawn with Liverpool, and somehow failed to collect a point in the 1-0 loss to Chelsea, a match Chelsea boss Thomas Tuchel recognized the strong attacking of the Bees.