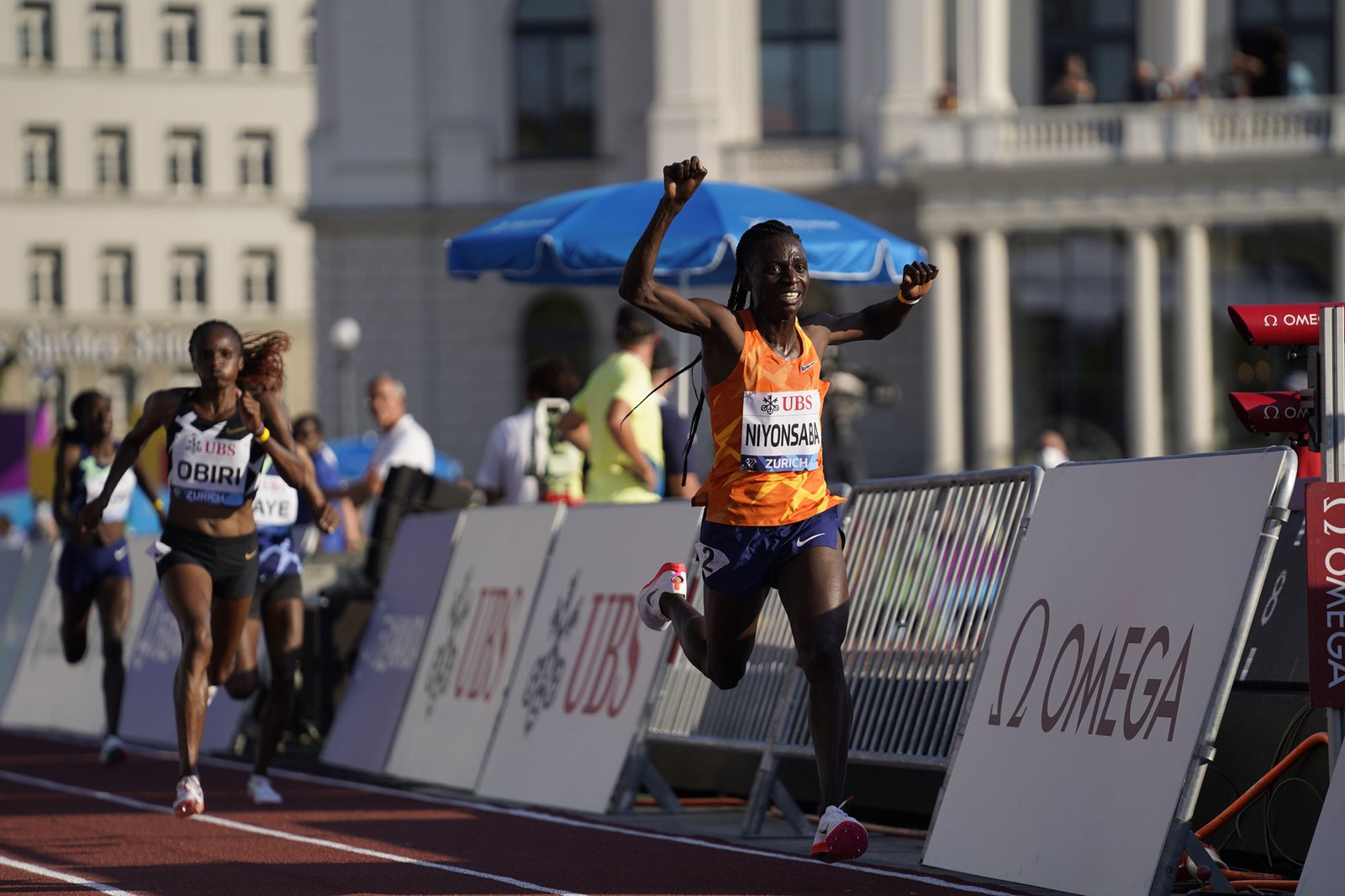 The Burundian clinched victory in the women’s 5,000m, edging out the Kenyan after clocking 14mins, 28.98secs, pushing away Obiri with a good finishing kick. Obiri, who will be moving to road running in the new season, crossed the line in 14mins, 29.68secs.

This is the second time that Obiri is beaten by the Burundian star, having lost when they met five days ago in Brussels.

Niyonsaba has been excelling in the distance races since she was forced to move distances higher than 3,000m by World Athletics rules on DSD athletes.

The Burundian has embraced the challenge and has shown that she is equally capable in long distance running. Previously, she was racing in the 800m and the new DSD rules put her, Caster Semenya and Kenyan Margaret Nyairera out of races between 400m and 1500m.

Meanwhile, the counterparts in the men’s corresponding race did not also manage to win. Jacob Krop was Kenya’s best finisher in the race, coming in third in a time of 13mins, 01.81secs ahead of compatriot Nicholas Kimeli who finished in fourth spot.

The race was won by Ethiopian Berihu Aregawi in 12mins, 58.65secs while Balew Birhanu of Bahrain came in at second position.

The second day of the season ending event will be staged on THursday at the Letzigrund Stadium with several Kenyans set to compete in the men and women’s 1500m, 800m and the steeplechase.

The highlight of the day will be a re-match between Faith Kipyegon and Sifan Hassan. The Kenyan beat the Netherlands star at the Tokyo Olympics in the 1500m and denied her a chance of picking up a historic three Olympic gold medals.

Hassan had already clinched the 5,000m and 10,000m crowns and only needed the 1500 to make history. However, Kipyegon showed superb running obliterating her out and pushing her to finish in second spot.

The two will meet for the sixth time this season with Kipyegon boasting of a better head to head record having beaten her competitor, whom they share a management with three times while Hassan has won twice.

Elsewhere, there will be another battle field for revenge when Benjamin Kigen and Abraham Kibiwott gang up against Soufiane El Bakkali. The Moroccan clinched gold at the Olympic Games, ending Kenya’s 37-year dominance of the water and barrier race.

Kigen who clinched bronze in the race will lead the Kenyan charge which will be boosted by former world junior champion Leonard Bett.

Meanwhile, Olympic bronze medalist Hyvin Kiyeng will lead Purity Kirui, Rosefline Chepngétich and former World Under-18 and Under-20 champion Celliphine Chespol in gunning for top honors in the women’s race.

In the men’s 1500m, Timothy Cheruiyot will also be seeking revenge on Norwegian Jakob Ingebrigtsen after the latter beat him at the Olympic Games. Cheruiyot clinched silver with Ingebrigtsen winning gold.

But with the Diamond Trophy at stake in Switzerland, the Kenyan world champion will be going all out. Also in the race are Kenyans Abel Kipsang, who finished fourth at Tokyo Olympics Ronald Kwemoi and Charles Simotwo.