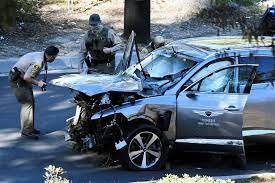 Tiger Woods the professional golfer was driving at an excess speed by the time of the car crash accident, as per reports.

Woods got involved in a single-car collision on February 23, 2021, and thus was hospitalized. He underwent emergency surgery to repair compound fractures sustained in each leg and a shattered ankle. He was treated at Harbor-UCLA Medical Center as well as Cedars-Sinai Medical Center.

Wood’s big talent stunned the world of sport and beyond and this resulted to support from former American Presidents; Donald Trump and Barack Obama.

The Los Angeles County Sheriff’s Department recently indicated that he was travelling at a speed of more than 64 km per hour above the speed limit when he lost control causing the crash.

“Heading down a notoriously dangerous stretch of road in the Rolling Hills Estates community in Los Angeles County, Woods’ car reached speeds of 135-140 kph when he lost control along a curve that has been the site of 14 other accidents, Sheriff Alex Villanueva said at a news conference. The speed limit was 72 kph.”

The Sport Utility Vehicle he was driving was accelerating at a speed of 120 kph when it hit a tree. The sheriff further revealed that there was no evidence to cite that Woods was impaired or that had consumed drugs or alcohol.

The LASD Captain James Powers further said that the car, which is known as the “black box” indicated that Tiger engaged the accelerator and never applied the brakes during the incident.

“That could indicate that he may have mistakenly hit the wrong pedal while trying to control the car,” Powers said.

However, Tiger Woods was not cited for driving at excessive speeds because there were no witnesses to the incident, which actually involved only his car according to Villanueva.

Two days ago, on 7th April 2021, Woods made an address on his Twitter handle citing that he had been informed by the Sheriff’s department that it had closed the investigation. He expressed gratitude to all those who offered him help, including the passersby who called the 911 emergency service as well as the paramedics who rushed him to the hospital.

“I will continue to focus on my recovery and family, and thank everyone for the overwhelming support and encouragement I’ve received throughout this very difficult time,” said Woods

Before the accident, Woods has held numerous golf records. He has been the number one player in the world for the most consecutive weeks and for the greatest total number of weeks of any golfer in history. He has been awarded PGA Player of the Year a record 11 times.