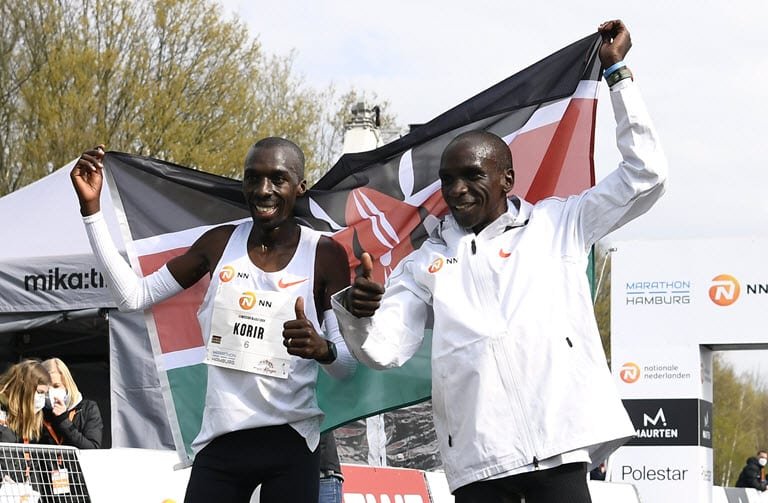 Kenya’s greatest of all time marathoner Eliud Kipchoge has yet again made history by winning the NN Mission Marathon. The race was held at the Twente Airport in Enschede, the Netherlands.

Kipchoge ran won by clocking 2:04:38 hours. This is his final race before the Tokyo Olympics Games which are to be held in Japan from July.

This event was initially planned and took place in Hamburg on April 11, where Kipchoge was set to make a comeback to the City, where he made his marathon debut.

However, due to the Covid-19 pandemic that has affected the entire world, the organizers had no choice but to find a new venue due to the pandemic crisis in Germany.

This Dutch race is important to Kipchoge as it gave him the confidence to make a good performance heading to the Tokyo Olympics.

This race broke the norm as it was closed to spectators due to the avoidance of further spreading of Covid-19.

In a pre-race press conference, Kipchoge disclosed that he had never been to Enschede before but has been to Hengelo where he made good memories.

Fate had it that Kipchoge would still return to the Netherlands, having left a memorable mark in all the three previous occasions he competes there.

“I have not been to Enschede before but I have been to Hengelo where I have good memories.  I remember I ran my Personal Bests (PBs) in 10,000m and 1500m,” said Kipchoge.

Kipchoge attained the PBs for both races at the annual BFK Games, in the neighbouring City of Hengelo. Hengelo is approximately 50km from Enschede.

The Enschede race marked the final outing For Eliud Kipchoge ahead of his title defence at the Summer Olympics which are about three months away.

Apart from Kipchoge, another Kenyan Jonathan Korir also races in a new Personal Best (PB). Korir came home as the second and clocked a time of 2:06:4 hours. The third position was held by Goitom Kifle.

Being the only man to run under 2:05 hours, Eliud Kipchoge was not under any big threat. It was expected by many that he would probably emerge the winner.

“However, Korir proved to be a hard nut to crack as he was right on the heels of Kipchoge until he faded off just after the 30km mark. The Olympic champion would thus compete against time in the final stretch of the race.”

In a post-race interview, Kipchoge gave the highlights of the race and described it as perfect.

“It was a bit windy but I can say the race was perfect. This marathon was the real test for Tokyo Olympics. I am now going to focus on the Games,” Kipchoge said.

The one-off race provided more than 100 elite athletes, with an opportunity to hit qualifying standards for the Olympic Games.

The much-hyped race was held by Kipchoge’s management NN jointly with the Hamburg Marathon organizers.