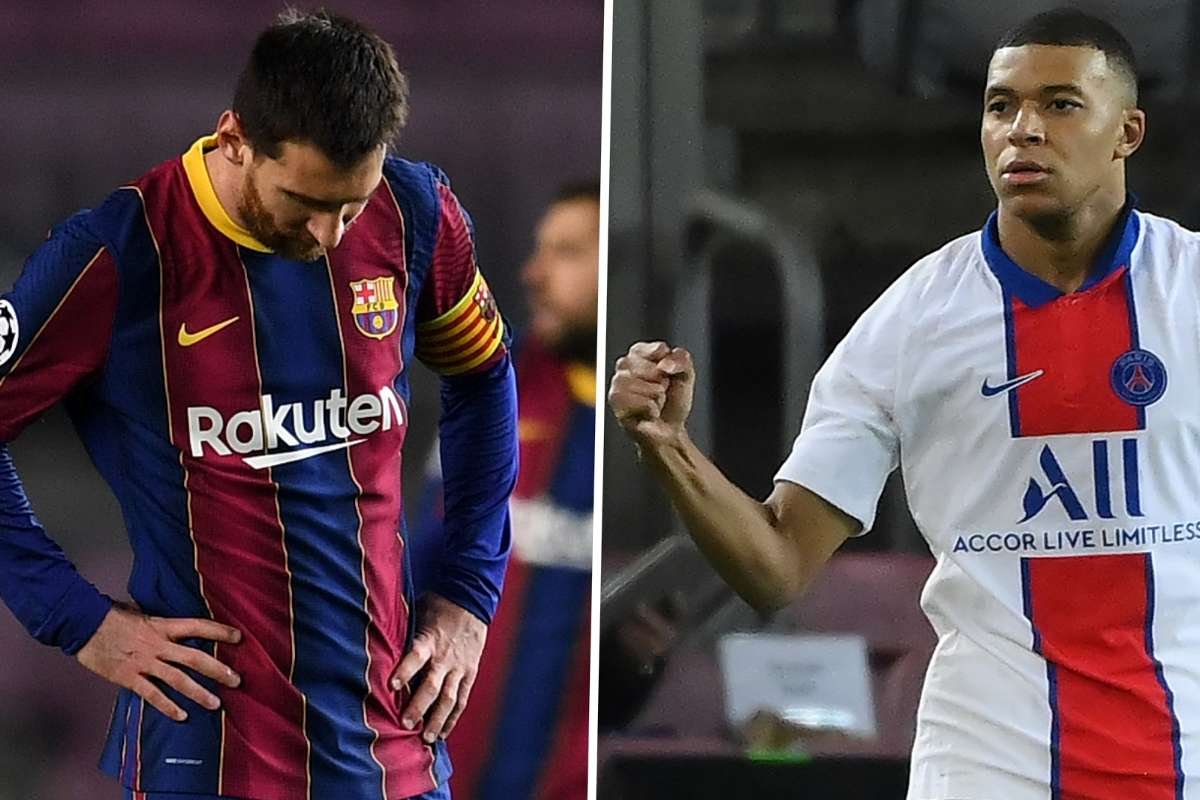 Kylian Mbappe was so impressive stealing the show from Lionel Messi who many thought would impress during the Tuesday night football. The Frenchman turned on style on his first-ever appearance against the Catalans.

Moise Kean also got on the scoresheet as PSG recorded a hugely impressive 4-1 victory.

As if the scoring was not enough, The Frenchman shocking destroyed Lionel Messi and two other Barcelona players in seconds before making over with the ball at the Camp Nou.

Impressive he was in his first-ever appearance against the Blaugrana, He outshined Messi scoring a hat-trick for the Paris Saint-Germain in the UEFA Champions League first league round of 16.

In the absence of Brazilian forward Neymar and winger Angel Di Maria for the grudge Competition, Kylian Mbappe was unstoppable giving Barcelona defenders a ran for their breath.

His performance was not merely about goals at the Camp Nou, but also the class and quality of play Mbappe showed. He was unstoppable terrorizing Barcelona’s defence line specially a returning and rusty Gerald Pique with pace and also his trick and mind game.

Mbappe becomes the third player to score a champions league hat-trick against Barcelona.

Barcelona forward Lionel Messi found himself on the wrong side and the right side of Kylian Mbappe when the two came up and close in the second half, destroying Messi mercilessly and two midfielders Pedri and Sergio Busquets in quick succession.

The blend of skills and wit that Mbappe uses to beat the opponents is surprising and can only make you hark back to the likes of Thiery Henry and Ronaldo Nazario.

At the 22-year-old of his career it’s a huge compliment and also a deserved one, already a world-class player young he is and way to reach that level.

The two Lionel Messi and Kylian Mbappe have only met on two occasions in big games with the future Ballon d’Or winner emerging victorious on the two occasions scoring five times in total.

The former Monaco man’s three-goal haul saw him move up to third in PSG’s all-time top scorer rankings on 112 goals, while he now has 40 goal involvements in 41 Champions League appearances.

According to the PSG’s Coach Mauricio Pochettino Mbappe had predicted a win before face off.

“Such was his elite mentality and confidence, Mbappe predicted victory for PSG in Catalonia.” mercilessly

Speaking in his post-match presser, Mauricio Pochettino said: “Yesterday, at training, he asked me how many times I had won at the Camp Nou. Once, I told him. He replied to me: tomorrow, we are going to win a second time. He is a top player.”

A top player indeed and the fact he’s still so young means he will no doubt get even better, which is a rather frightening thought.