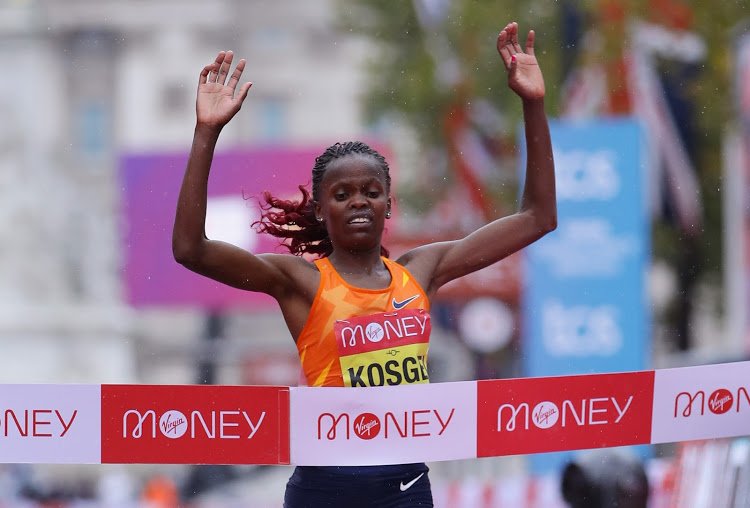 Kenya’s Brigid Kosgei did not make much of her dominant display as she powered to victory in the women’s race of the London Marathon on Sunday.

Kosgei crossed the finish line in 2:18:58 – over three minutes ahead of her nearest challenger in windy and rainy conditions. American Sarah Hall was second in 2:22:01, with another Kenyan Ruth Chepngetich completing the podium in 2:22:05.

“I just tried my best,” Kosgei said after the race. “The weather affected us today. There was some wind and rain all the way, which made our muscles colder. No one could warm up so it was difficult to even finish.”

Kosgei as the world record holder in the women’s marathon was the overwhelming favourite coming into the race, and she defended her title in fine fashion.

Chepngetich was the main threat to Kosgei in the early stages, as the pair broke away from the field 16km into the race. Their halfway split of 1:08:15 put them on track for a sub-2:17 finish – but the conditions would wear down the field during the latter part of the contest.

Kosgei made her move just after the 30km mark, surging ahead – and Chepngetich was unable to stay with her.

From that point on, Kosgei would keep increasing her lead which would eventually end in a huge margin of victory.

Chepngetich, meanwhile, battled it out with Hall for second place over the closing stages. Ultimately, Hall would overhaul Chepngetich in the final few metres of the race to claim a well-earned runner-up spot.