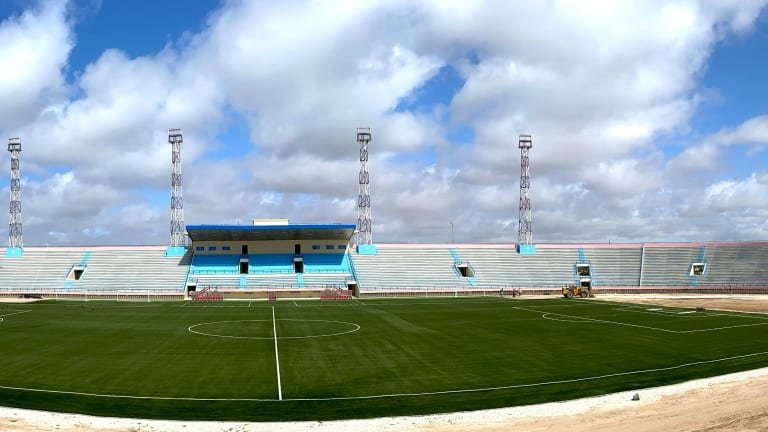 Despite being in the midst of a global pandemic, Somalia’s iconic venue – Stadium Mogadishu hosted its first football match in 16 years.

The country’s President Mohamed Abdullahi Mohamed inaugurated the home of the Ocean Stars, with a match between local sides Horseed SC and Mogadishu City Club.

The national stadium until recently served as a base for peacekeepers deployed by the African Union to help stabilise the Horn of Africa.

At exactly 4:55 pm local time, history was made when Mohamed, escorted to the centre of the pitch by Minister of Youth and Sport, Khadija Mohamed Diriye and Somali Football Federation (SFF) president, Abdiqani Said Arab, performed the ceremonial kick-off to herald a new chapter in the history of Somali football.

“On behalf of the Somali Football family, I would like to thank Somali Government for making everything possible to get Stadium Mogadishu back to use,” Abdiqani said.

He declared the stadium ready for use as Somalia intends to host matches at the once-popular ground.

Meanwhile, military-side Horseed etched their names in history with victory in the inaugural match at the renovated stadium, defeating Mogadishu City Club 2-1 in a non-competitive cup match.

The first match ever played at Stadium Mogadishu after completion was a friendly match between Ocean Stars and a Chinese Club, Leonen.

However, as a result of political instability since 1991, the stadium has served other purposes other than football, with a competitive game last held at the venue in 2004.