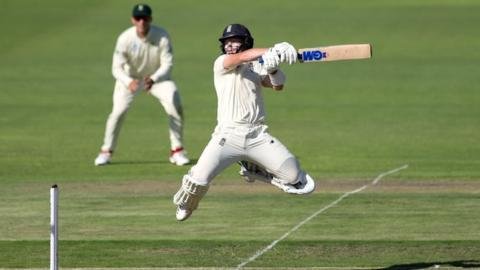 South Africa lost 10 wickets over the course of another rain-affected day to leave England closing in on victory in the third Test against South Africa in Port Elizabeth.

Joe Root was the unlikely star with the ball for the visitors, with his decision to make the hosts follow on backed up by a stellar individual return of 4/31, with South Africa closing the day on 102/6, still 188 runs behind England’s first-innings total.

It was a miserable day for the Proteas from the off. Having begun it on 208/6 after Quinton de Kock and Vernon Philander had battled hard the previous evening, their last four wickets in the first innings fell with just a solitary run added to the total.

Both de Kock and Philander were at fault with booming attempts at drives that saw them bowled. Kesha Maharaj and Kagiso Rabada were removed shortly after to hand Root the question: he answered by calling South Africa’s batters back in.

Rain hindered England’s momentum after 6.5 overs of South Africa’s innings, but when they resumed hours later, the pace of Mark Wood remained relentless. A ball thundered through to Elgar had the stumps down and Zubayr Hamza leg-glanced one straight into the safe hands of Jos Buttler not long after.

While Dom Bess tied up one end, Root’s twirlers proved to be more damaging. Pieter Malan was out lbw as Root caused trouble from around the wicket, and a staggering catch from Ollie Pope at short leg sent Rassie van der Dussen back for 10.

De Kock’s miserable day continued with an ugly swing of the bat that popped up a catch for Wood at the point, and Faf du Plessis’ review was more hopeful than anything else when he offered bat-pad catch to the lively Pope.

Rain on the final day looks the only threat to a victory that would hand England a 2-1 series lead.