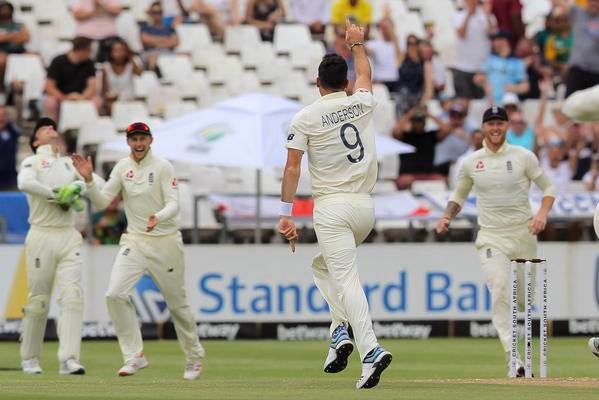 South Africa started the day 215/8 but their day got off to the worst possible start as James Anderson found the edge of Kagiso Rabada’s bat. The wicket left Anderson on a hattrick as Anderson removed Keshav Maharaj with the final ball of the previous day.

Anderson soon had Anrich Nortje nicking and Ben Stokes lapped up his fifth catch for the innings.

That wicket gave Anderson his 28th five-for in Test cricket, earning him the record for most five-wicket hauls for England. Stokes’ five catches made him the first England fielder to take that many in an innings.

South Africa were all out for 223 giving England a first-innings lead of 46 runs.

England’s inexperienced opening duo of Zak Crawley and Sibley got off to a great start, Crawley hitting a lovely straight drive off Rabada. Spurred by Crawley’s expansive game, Rabada tested the 21-year old Crawley with plenty of quick, short balls and soon had him caught behind for 25.

Joe Denly joined Sibley and the pair got through to lunch without conceding another wicket, blunting the new ball with a run-rate of around two.

The second-wicket partnership was worth 73 when Denly was bounced out by Nortje, caught well by Dwaine Pretorius in the deep.

England captain Joe Root was with Sibley when the Warwickshire opener reached his maiden Test half-century with a dab down to third-man for a couple.

Root was the quicker scorer of the two, working the ball to all directions of the ground whereas Sibley was more watchful scoring most of his runs through his favoured mid-wicket.

Root reached his 46th Test half-century and looked set for plenty more. That was until Pretorius got a ball to seam off the wicket and found Root’s edge, Faf du Plessis taking a simple catch at slip.

Dom Bess was sent out as the night watchman, but he was dismissed on the last ball of the day, gloving a Nortje short ball down the leg side for nought.

Despite the two late wickets, the day belonged to England and they now find themselves in pole position with having already swelled to 264.