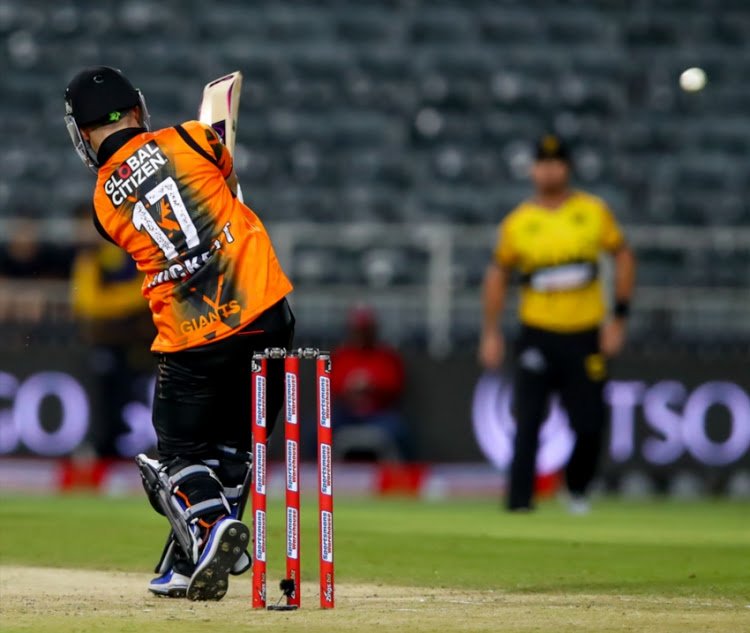 Strong hitting by Marco Marais and Chris Morris provided a thrilling Mzansi Super League (MSL) finish as the Nelson Mandela Bay Giants came from behind to snatch a fine five-wicket win over the Cape Town Blitz in their top-of-the-table clash in Port Elizabeth on Wednesday.

Chasing a hefty 187 for victory, the hosts slipped to 3/2o, before captain Jon-Jon Smuts gave them belief with his 73 (51 balls, eight fours, two sixes) before Marais clobbered 40 off 20 balls and Morris swatted 19 off nine balls to complete the job with four deliveries to spare.

It meant the Giants leapfrogged the Blitz to the top of the competition standings with 15 points from four games, two better than their Cape rivals, who have played one game more.

The hosts lost the toss and were asked to bowl first, with the opposition top-order going crazy early on.

Quinton de Kock hit three sixes and four fours in his 39 off 18 balls, while fellow opener Janneman Malan struck 31 off 22 balls as the Blitz raced to 72/0 in the seventh.

But they were then hauled back in the final five overs as Onke Nyaku ended with 2/17.

There were also doubles for Imran Tahir (2/26), Chris Morris (2/33) and the expensive Junior Dala, who conceded a whopping 52 in his four overs but did manage two strikes.

The Giants failed to initially capitalise on that strong finish with the ball and found themselves in a huge hole inside the first nine balls as Matthew Breetzke (0) and England World Cup-winner Jason Roy (one) were sent packing by Anrich Nortje (1/41) and Dale Steyn (2/38) respectively.

But skipper Smuts and Australian Ben Dunk (28) managed to get the fire burning with a stand of 53 for the third wicket before another 44-run stand between the former and Heino Kuhn (15) followed.

However, when the latter fell in the 13th over there were still more than 80 needed as the Blitz looked primed to close in.

The final partnership between Marais and Morris yielded 37 in just 18 balls, as a big hit by the Proteas all-rounder was not held on the fence by George Linde with the ball going for six and the win.