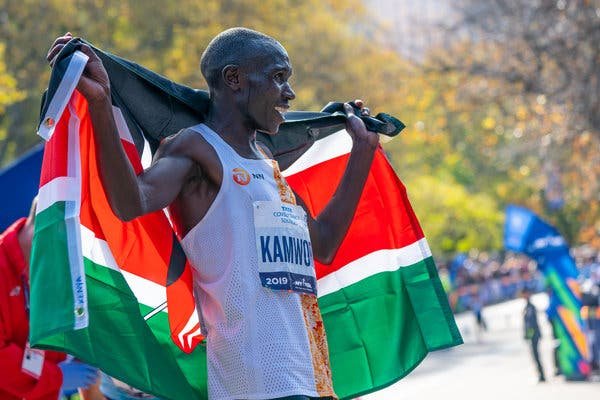 In a race without pacemakers, which featured a steady early pace in both men’s and women’s races, it was always likely to favour those with the fastest half marathon speed and in that realm, no one in history could rival Kamworor or Jepkosgei.

The half marathon world record-holders stamped their supremacy in the final 5km of their respective races as they charged into Central Park where Jepkosgei hit the line in 2:22:38 and Kamworor in 2:08:13.

It marked a magnificent marathon debut for Jepkosgei, the 25-year-old who set the half marathon world record at 1:04:51 in 2017.

“I was very proud to make my debut here in New York,” said Jepkosgei. “I was not nervous about my debut. Through all the steps I didn’t have any pressure and I was running my own ace. At long last, I (have) become a winner. I did not know I would win but I was trying my best to finish strong.”

In the men’s race, Kamworor hit the finish 23 seconds clear of Kenyan compatriot Albert Korir, who in turn was two seconds clear of Ethiopia’s Girma Gebre. The third-placed finisher provided one of the upsets of the day given the Ethiopian has no agent or shoe sponsor and had lined up at a different start line to the elites after entering the event in the open category. Another Ethiopian Tamirat Tola claimed fourth in 2:09:20 with countryman Shura Kitata taking fifth in 2:10:39.

“I was ready for anything,” said Kamworor. “The last few years the race went so fast and I just stuck with the others (this time) and at 24 miles I decided it was time to go. I was feeling strong and I had no problem throughout the race. It was a good one for me.”