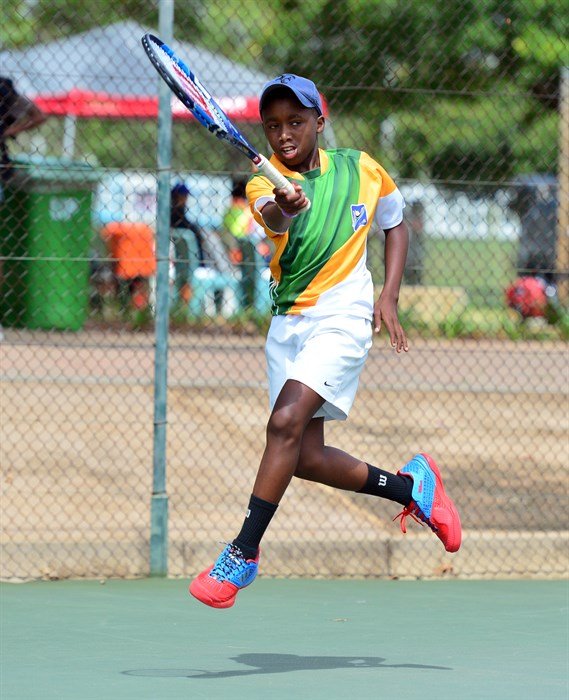 Share
Tweet
Share
Share
Email
Comments
South Africa’s rising tennis star sixth-seeded Khololwam Montsi sounded a championship warning after he defeated top-seeded Arthur Cazaux of France 2-6 7-5 6-2 in the quarterfinal round at the David Samaai Junior Open at Kelvin Grove Club, Newlands on Thursday.
After losing the opening set, the 16-year-old Montsi produced a thrilling fightback much to the delight of the home crowd who were vociferous in their support for him. Montsi has a junior world ranking of 75 and Cazaux, who hails from Montpellier, is a fair bit higher at 49.
But the form book counted for nothing as Montsi clawed his way back in the second set by winning all the points that mattered. It was touch-and-go throughout, but he won through 7-5 on the back of a brave performance.
In the third set, Montsi unleashed a steady stream of winners at crucial times before he signed off a 2-6 7-5 6-2 winner and secure a place in Friday’s semifinals.
The third seed, 17-year-old Jeffrey von der Schulenburg of Switzerland defeated 17-year-old Ivory Coast star, the fifth-seeded Eliakim Coulibaly 6-1 6-4.
Von Der Schulenburg made a fine start with a service break in the opening game but then he was pegged back when Coulibaly broke right back. It took Zurich-based Swiss junior by surprise.
“When he broke back, I decided to remain calm and deal with the setback. I was looking to go 2-0 up but it didn’t happen that way.
“The first-set was far closer than the 6-1 scoreline suggests.”
Von der Schulenburg said that after winning the first set he needed to maintain concentration to see him through to the end.
“The games were longer as there were no easy points on offer,” he said. “I broke him in the seventh, but he bounced back in the next game to make it 4-4.
“Nervousness set in after that but I remained composed. I was able to hold serve and then secured a break to take the match, but it was a real fight out there today.”
Bloemfontein’s Joubert Klopper, the 18-year-old who was hitting partner with the SA Kia Davis Cup last week, perished in his quarterfinal against Germany’s Max Wiskandt who won 6-1 6-2.
“Max (Wiskandt) was aggressive and hit the ball hard. He’s a real grinder,” said Klopper. “It tried to keep him as deep as possible, but he had a counter to everything I threw at him.
“He didn’t allow me to dictate as much as I tried. From start to finish he fought for every point.
“I have fighting capabilities and I tried my best out there today. It was probably my best performance this week, but I was up against one of the best returners in junior tennis.”
Quarterfinal results, Boys:
6-Khololwam Montsi (RSA) bt 1-Arthur Cazaux (FRA) 2-6 7-5 6-2
3-Jeffrey von der Schulenburg (SUI) bt 5-Eliakim Coulibaly (CIV) 6-1 6-4
4-Terence Atmane (FRA) bt 10-Gian Luca Tanner (SUI) 6-3 0-6 6-2
13- Max Wiskandt (GER) bt 11-Joubert Klopper (RSA) 6-1 6-2
In partnership with ANA and Sports Leo