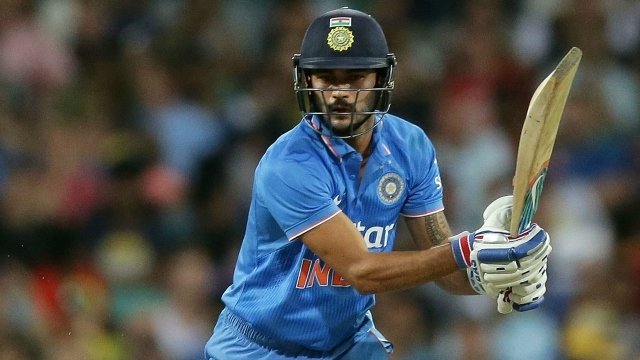 Captain Manish Pandey scored a half-century that helped his India A side move into an unassailable 3-0 lead over South Africa A with a four-wicket win in match three of their one-day series at the Greenfield International Stadium in Trivandrum on Monday.

In a match reduced to 30 overs per side, the right-hander struck five sixes and three fours in a 59-ball 81 as the hosts cruised to their 208-run victory target with 13 balls to spare.

The result meant India clinched the five-match series with two games to spare.

They came into the game on the back of a 69-run victory in the opening game and two-wicket win in the heavily rain-reduced (21 overs) second match, but were put under pressure initially by the tourists, who won the toss and batted first.

After Reeza Hendricks (nine) fell early, Janneman Malan (37) and Matthew Breetzke (36) helped take the South Africans to 92/3 at the halfway stage, before Temba Bavuma (27) and Khaya Zondo (21) continued to tick things forward steadily rather than rapidly.

It was only when top-scorer Heinrich Klaasen (44 off 21 balls) really put his foot down that the away side accelerated to reach 207/8.

Krunal Pandya was the pick of the bowlers with 2/23.

Anrich Nortje (2/41) then gave the visitors the perfect start by nabbing two wickets in three balls to leave the hosts on 5/2.  They slipped into further trouble when Pandya fell to Junior Dala (1/44) for 13.

But they recovered excellently thanks to Pandey and Ishan Kishan (40) putting on 60 for the fourth wicket to take the score to 96, with Shivam Dube (45 not out off 28) adding the finishing touches emphatically as the Asian side clinched the series.

The fourth match takes place at the same venue on Wednesday.