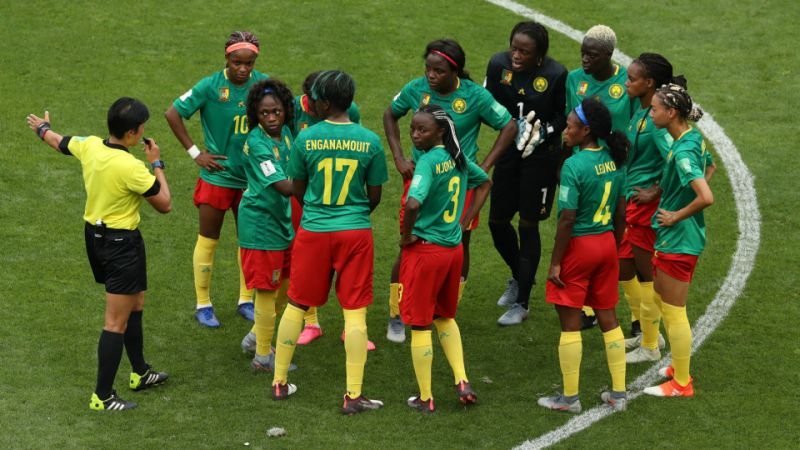 FIFA look set to launch an investigation into the conduct of the Cameroon players during their 3-0 defeat to England in the Women’s World Cup.

In a highly controversial last-16 encounter in Valenciennes on Sunday, the drama began when Cameroon refused (for a short while, lasting three minutes or so) to restart the match after the video assistant referee (VAR) had ruled that Ellen White’s second goal was onside.

More drama followed when Ajara Nchout’s goal for the west African team was ruled offside by the VAR, and as Chinese referee Liang Qin seemingly lost control of proceedings, Yvonne Leuko was probably fortunate to be handed only a yellow card for an elbow on Nikita Parris, while Augustine Ejangue appeared to spit on Toni Duggan.

Right at the end of the match, Alexandra Takounda also escaped being sent off after a nasty challenge on England skipper Steph Houghton.

Comments and allegations made during the game and after it in the players’ tunnel are also to be investigated, while there were reported scenes of clashes involving Cameroon supporters in the VIP area at the Stade du Hainaut, as well as alleged incidents at the hotel where the two teams were staying.

FIFA have not yet issued an official statement on the matter, but are set to look into the matter, according to a comment made by a FIFA official to BBC Sport.

“Whilst remaining proud of our African teams that participated in the FIFA Women’s World Cup, [Sunday’s] match between England and Cameroon reflected badly, not only on African women’s football but African football on the whole,” said Johansen, who is also president of the Sierra Leone FA.

“It is an issue which will be addressed and dealt with at the appropriate levels of governance.”

Meanwhile, Fatma Samoura, a former Senegal diplomat who previously worked for the United Nations and who was appointed as the first female Secretary General of FIFA three years ago, has been criticised for her support of the Cameroon players, after she tweeted:

“To my sisters the Lionesses. Your participation in the Women’s World Cup has inspired many young girls in Cameroon.

“Your passionate and talented play on the field has made your fans proud and your country is proud of you.”

Samoura was recently appointed as a ‘FIFA General Delegate for Africa’ in what is an apparent attempt to improve football governance on the continent. This followed the arrest (and subsequent release) of the Confederation of African Football (CAF) president Ahmad Ahmad, after allegations of corruption had surfaced.