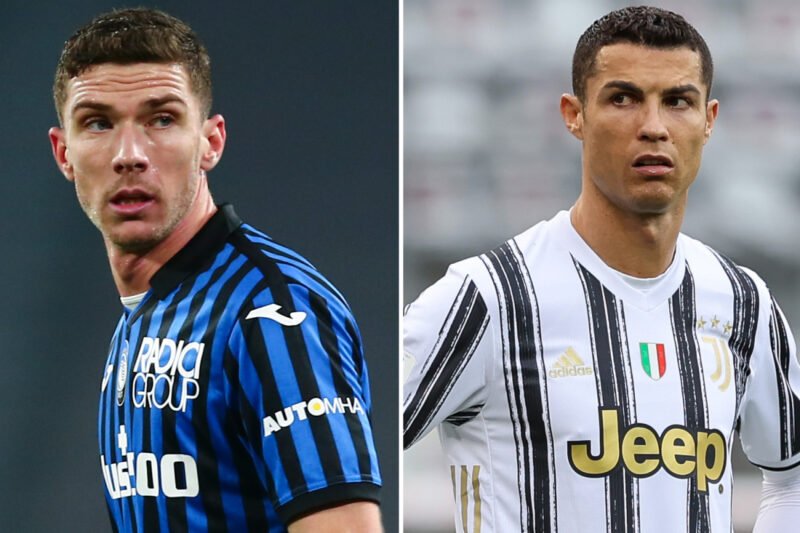 German Professional and Italian side Atalanta full back star Robin Gosens has recalled an embarrassment he encountered when Portuguese and five time Ballon d’Or winner Cristiano Ronaldo once declined swapping shirts with him at the end of the game.

Having spent four years at Italian side Atlanta Robin Gosens, admits he requested to have Cristiano Ronaldo’s shirt but the Juventus superstar and most iconic footballer didn’t even look at him before brutally snubbing his request.

The 26-year-old has long idolised Ronaldo, meaning his £100million move to Juventus in 2018 provided him with the perfect opportunity to try and attain his shirt.

However, what should have been one of the proudest nights of his career soon turned into one of his most embarrassing moments on a football pitch when Ronaldo rejected his advances.

In his biography ‘Dreams Are Worthwhile’, Gosens says: “After the game against Juventus, I tried to fulfil my dream of having Ronaldo’s jersey.

“After the final whistle I went to him, having not even gone public to celebrate.

“But Ronaldo did not accept.

“I asked, ‘Cristiano, can I have your shirt?’

“I was completely blushed and ashamed. I went away and felt small.

“You know that moment when something embarrassing happens and you look around to see if anyone noticed it? That’s what I felt and tried to hide it.”

Indeed it was a high standard snub from Cristiano Ronaldo.

Robin Gosens Atlanta currently sits ahead of Ronaldo’s Juventus in the Serie A table, with Atalanta two points clear of Juventus up in third place.

Gian Piero Gasperini’s men have recorded three straight league wins following a 1-0 defeat against Inter Milan, who have an eight-point lead at the top of the table right now.

Antonio Conte’s men can extend that lead to 11 points by winning their game-in-hand against Sassuolo on Wednesday night.

As for Juventus, they will look to claim their first win in three games against Napoli on the same evening, having lost against Benevento and drawn with Torino in their last two outings.

Juventus snatched a point in the Turin derby on Saturday afternoon, drawing 2-2 with Torino thanks to a late Cristiano Ronaldo header.

The game started well enough for the visitors, who took the lead through live wire Federico Chiesa on 13 minutes. The Italian winger tiptoed into the penalty area, and with the Torino defence afraid to make any contact, Chiesa fired through Salvatore Sirigu’s legs to hand the advantage to the champions.

Their joy was short-lived however, as Wojciech Szczesny spilled a shot from the edge of the box, and Antonio Sanabria was on hand to rise highest and nod the ball over the line from a couple of yards out,

The game ended 2-2 in Turin, heaping even more pressure on Andrea Pirlo in the Juventus technical area. The rookie coach is running out of time.