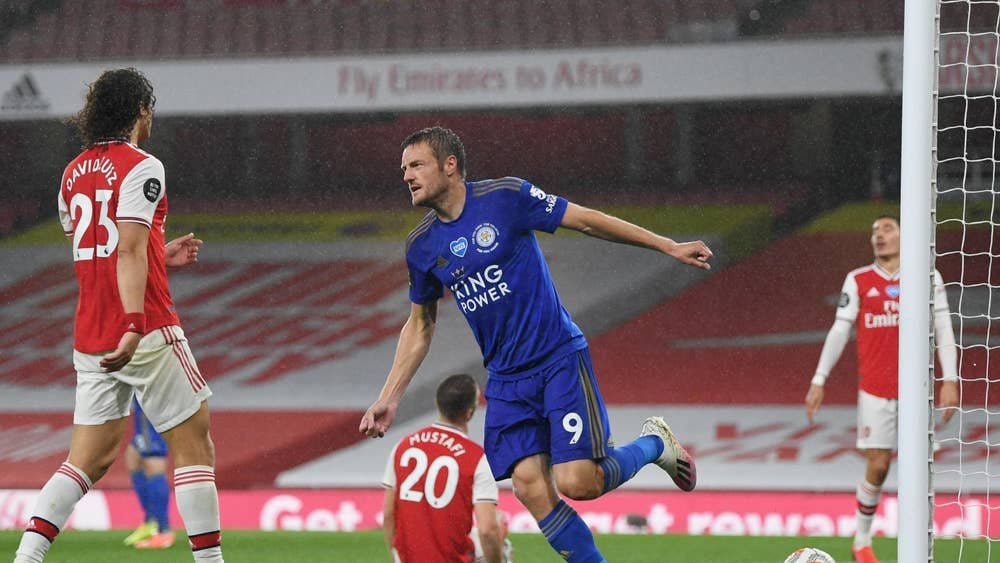 The Gunners saw Edward Nketiah sent off following a VAR review before Vardy levelled with a lengthy delay for a possible offside.

Vardy and Kelechi Iheanacho had early chances as Leicester started well, but it was Arsenal who took the lead in the 21st minute thanks to a wonderful piece of play from Bukayo Saka. The England under-19 international was fleet of foot to open up Leicester, wrong-footing Jonny Evans to lay on a simple chance for Pierre-Emerick Aubameyang to score.

Saka then almost added a second himself, but Kasper Schmeichel kept the effort out with his legs. And the 18-year-old was again at the centre of the move as Schmeichel got down low to keep out Alexandre Lacazette.

David Luiz came close just after the interval before Vardy set up Iheanacho with a wonderful ball only for the Nigeria international to fire straight at Emiliano Martinez.

Nketiah came off the bench for Arsenal in the 71st minute, but within four minutes he was back down the tunnel after being sent off following a VAR review. Nketiah had been booked by referee Chris Kavanagh for a challenge on James Justin, but the VAR Stuart Attwell advised it should be upgraded to a red — leaving Arsenal to play out the rest of the game with 10 men.

From that point onwards Leicester dominated the play and got themselves back on level terms in the 85th minute when Demarai Gray‘s inch-perfect ball was finished off by Vardy from close range. Another lengthy VAR review followed, with Ayoze Perez stretching for the ball in an offside position; touching the ball would have played Vardy offside, but Perez was deemed not to have reached it with his outstretched boot.

Leicester couldn’t force a winner, with Dennis Praet firing over in the final seconds, and the two sides had to settle for a point.