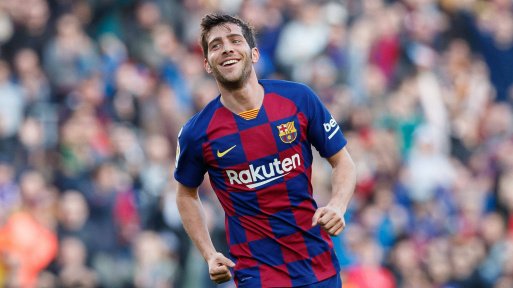 FC Barcelona fullback Sergi Roberto has tested positive for coronavirus, according to the club statement.

The player has not been included in the Barcelona squad to face Ferencvaros in their Champions League match.

He will miss the fixture as he is also nursing the injury he sustained against Atletico Madrid last month in their La Liga clash.

The versatile player suffered a tear in the rectus femoris of his right thigh in Barca’s 1 0 loss to Atletico and is expected to miss footballing actions for two months.

According to the club’s website, Roberto is in good health and isolating at home.

He tested positive during the round of PCR tests carried out this Tuesday, and the club have informed all the necessary sporting and health authorities.

The 28-year-old adds to defensive woes for manager Ronald Koeman who is without Clement Lenglet, Gerard Pique and Samuel Umtiti.

Former Ajax player Frenkie De Jong is expected to assume defensive duties as a centre-back, a position he could slot in well.