Truth about boxing gloves and other boxing facts you should know Truth about boxing gloves and other boxing facts you should know. Photo/ Times of India

Have you ever wondered what the origin of the king of combat sports is? Well, there are several boxing facts you didn’t know about.

Boxing has come a long way dating back to human history, and it is, without a doubt, one of the oldest sports in the world.

Boxing techniques have been incorporated into many military systems, martial arts and other combat sports.

From an official match between a bear and a man to the truth about boxing gloves, here we will discuss ten interesting boxing facts you probably didn’t know about.

1. Guis Waldorf Vs A Bear 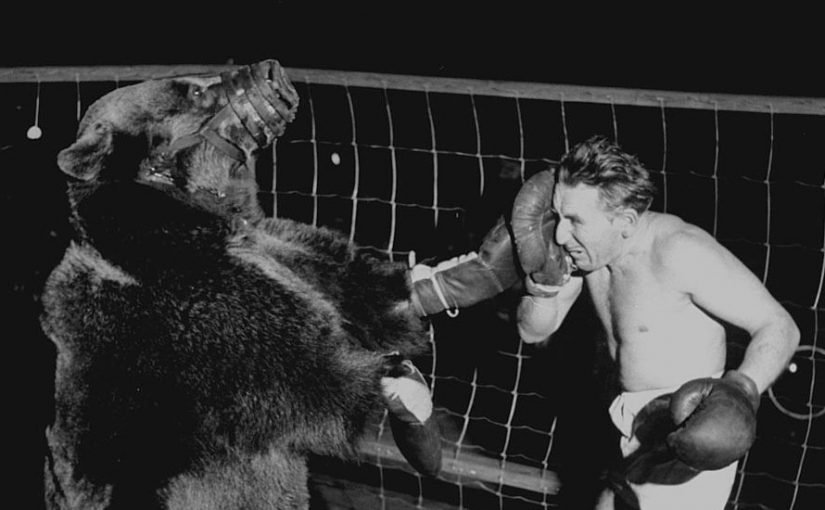 Guis Waldorf boxing a bear in 1949. Photo/ All Unreal

The first and only official boxing match between a man and a bear took place in 1949. The bear was made to wear boxing gloves and a muzzle so as to prevent it from biting.

Guis Waldorf and the bear exchanged brutal punches until the beast landed a heavy right that knocked down his opponent.

The fight ended in the first round, and the bear won a belt.

2. The Official Name of Boxing

It might surprise many that boxing is not the sport’s official name. Pugilism is the official name of this sport, whereby two people wearing protective equipment face each other in the ring.

Pugilism means practice and skills of fighting with fists.

There are two forms of boxing – amateur boxing and professional boxing.

Amateur boxing is both a Commonwealth and Olympic games sport and is a standard fixture in most international games.

Amateur boxing consists of three to four rounds, and the fighters wear protective headgear to reduce the risk of head injury.

On the other hand, professional boxing bouts are fought for a purse which is divided between the two fighters as per the contract.

Most boxers use their success in amateur boxing to launch their professional boxing career and go on to become legends.

4. Jack Broughton Was The First Person To Open A Boxing School

Jack Broughton was one of the best fighters during his days. The Englishman was the reigning champion between 1734 and 1758.

He was the first person to open a boxing school and subsequently helped formulate the first set of boxing rules.

The shortest boxing match ever recorded was between Pat Brownson and Michael Collins.

Michael Collins won the bout in just four seconds. The fight was so short that it’s in the Guinness Book of World Records.

A London dentist, Jack Marles, invented the first mouth-guards used by boxers. The mouth-guards were designed so as to be worn by boxers during training to protect their teeth.

Ted “The Kid” Lewis was the first boxer to use one of those mouth-guards. They have since become popular in both amateur and professional boxing.

7. The Most Expensive Fight Floyd Mayweather walked away with $120 million, while his opponent received $80 million for the fight.

The National Boxing Association (NBA) was established in 1927 as a fair governing body looking into the combat sport.

The NBA arranged championship bouts among the best fighters and also looked into ethics and popularity of the sport.

As of 2022, there are three boxing organizations – the WBC, IBF and WBA.

9. The Most Heavyweight Title Defences

Joseph Louis Barrow holds the record for the most heavyweight title defences. The legendary fighter defended his title in 26 fights between 1937 and 1949.

He is widely regarded as one of the greatest boxers of all time.

Most people believe that boxing gloves are to soften blows. Well, this is wrong since gloves were introduced in the boxing world for hits in the head and dramatic knockout effects.

Meet Holly Holm, the first fighter to hold a title in boxing and UFC
Is boxing champion Claressa Shields married? Find out