Kenya Simbas hold their nerve to edge out Algeria 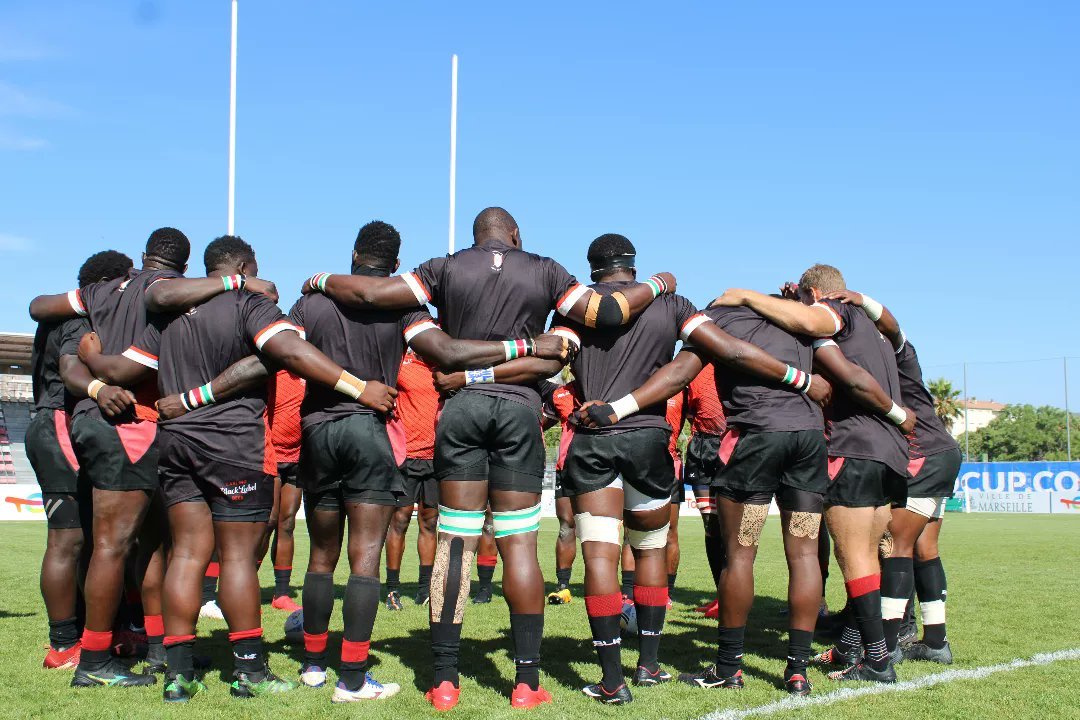 The Simbas hurdle together before the match

The Kenya Simbas held on to final minutes pressure to edge out a stubborn Algeria 36-33 and storm into the final of the Africa Cup in Marseille France. The Kenyan lads had beaten Uganda 42-7 in the quarter finals last Saturday to book a slot in the semis.

The Simbas were put under pressure by the Algerians in the final 10 minutes of the match, but they turned over possession at the death to pinch out the victory and book a slot in the final against Namibia who beat Zimbabwe in the other semi-final.

“Very very tough game today and we knew that we were going to face problems against Algeria especially with their forwards. But I must congratulate the players. They truly deserve this because they worked so hard to sustain the pressure,” said coach Paul Odera.

“Now we have to rest and focus because we are now just 80 minutes away from a historic place in the World Cup. That should be enough motivation,” he added.

The Algerians started brighter just within the first minute thought they had cross over through Nadir Megdoud, but the TMO came to Simbas rescue cancelling the try.

They however got into the lead minutes later when Marvyn Youcef dotted down after a turnover. Benjamin Caminati added the twos for a 7-0 lead.

The Kenyan boys however fought to get back into contention when John Okoth scored the first of his two, picking up an offload from man of the match Samuel Asati before crossing over. Darwin Mukidza converted for a 7-7 score.

In what was now a see saw affair, Algeria went back to the lead after Issam Hamel touched over the line off a driving maul and Caminati confirming the extras for a 14-7 lead.

Again, the game was tied after a superb try from Kenya, when Bethwell Anami initiated a counter from a line out. He kicked upfield and Okoth chased down to land his brace. The conversion was good as the score levelled once again, this time at 14-14.

Kenya took the lead for the first time in the game before halftime, Mukidza getting his first try of the game after some patient build up created space on the left. The conversion went over as Simbas led 21-14 at the break.

In the second half, Algeria started just as strong as they were in the opening half and within five minutes of the restart they drew level once again, another strong maul seeing Yassin Bouttemani grounding the ball across the line.

Coach Odera made changes, with Jone Kubu coming on. The Fijian-turned Kenya made an immediate impact when Kenya won a penalty and decided to go for the posts, the substitute doing the job to take Kenya 24-21 up.

It now seemed to be a Simbas affair as Eugene Sifuna added another try for Kenya, picking up an offload from Dominic Coulson before sighting space and going over the line. Kubu added the extras to give the boys a 10 point lead, with a 31-21 score.

The Algerians however responded from another driving maul with the ball spread out to Nadir on the left, the winger dotting down his second of the evening. The conversion was wide, scores being 31-26.

The Simbas restored their 10 point lead through Bryce Adaka, a little out and in step throwing his marker off from a Kubu offload. The conversion from Kubu was wide. Algeria then went within three points of the Simbas after being awarded a penalty try from a scrum with 12 minutes left.

Despite pressure, Kenya held on for the win.