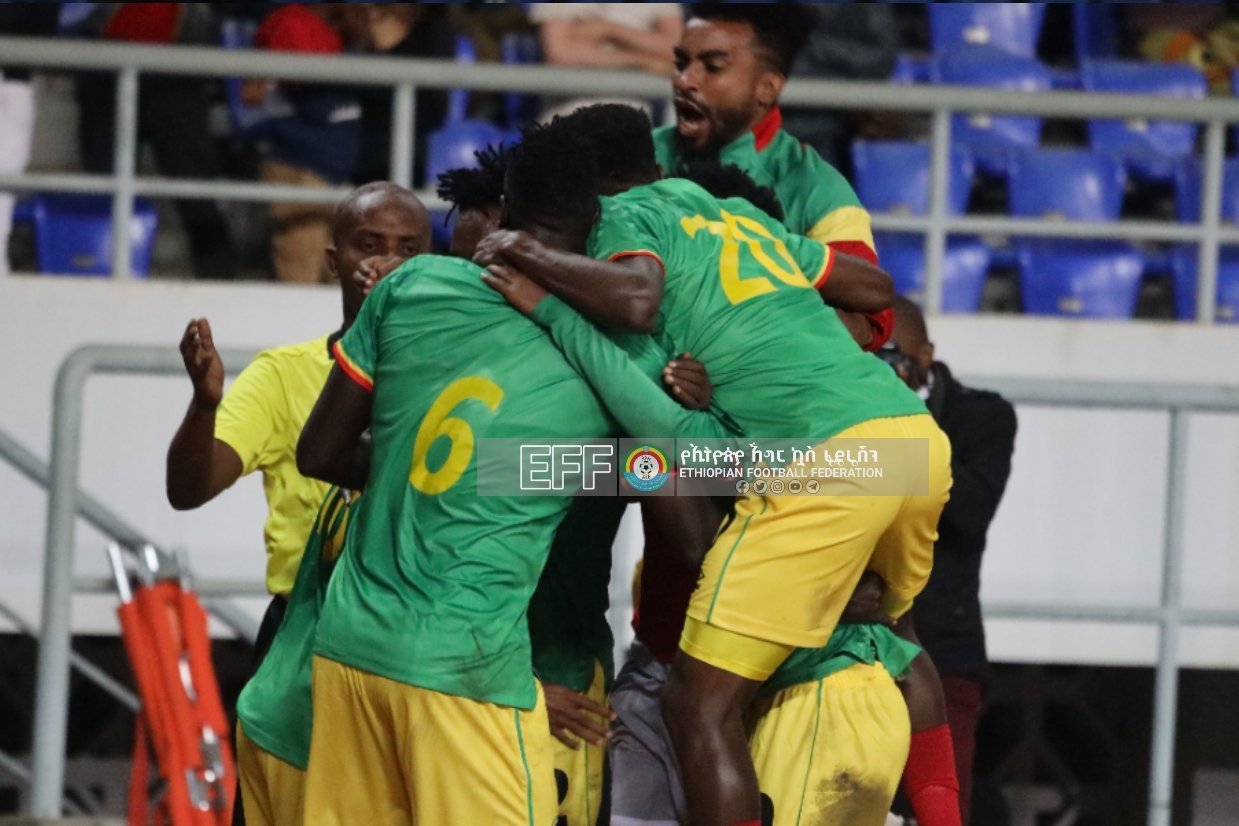 Ethiopia celebrate in their win over Egypt

Ethiopia stunned Egypt 2-0 in their 2023 Africa Cup of Nations qualifier in Malawi yesterday, with the Pharaohs missing their star player Mohamed Salah.

The forward was said to have played through the pain barrier in their first qualification match against Guinea last weekend, and missed the Ethiopia tie as he was given time out to rest.

And the Walia Ibex took maximum advantage of the star’s absence to punish the Egyptians and put their qualification hopes back on track.

First half goals from Dawa Hotessa and skipper Shemeles Bekele earned Ethiopia a well deserved victory in Malawi, where Ethiopia chose to host their home matches as no stadium in their country had been approved to host international games.

Hotessa broke the deadlock after 21 minutes with a sliding finish, stretching in to direct the ball home after some fine work from Abubaker Nasser to lay in a low cross from the right.

Nasser came inches close to making it 2-0 for Ethiopia in the 24th minute when he ran on to a through ball from the middle, but his shot past the keeper hit the upright and rolled away.

He thought he had scored in the 34th minute when he tapped home a cross from the right, but the referee’s flag was up for offside.

The Walia Ibex however finished the half with the second goal five minutes to the break through Bekele’s thumping shot from inside the box. The skipper had started the move himself, spreading to Amanuel Gebremichael who played him through on goal.

Egypt made changes to their team just before the break and emerging from the breather, they looked and played better, but Ethiopia defended with a lot of confidence to clinch the three points. 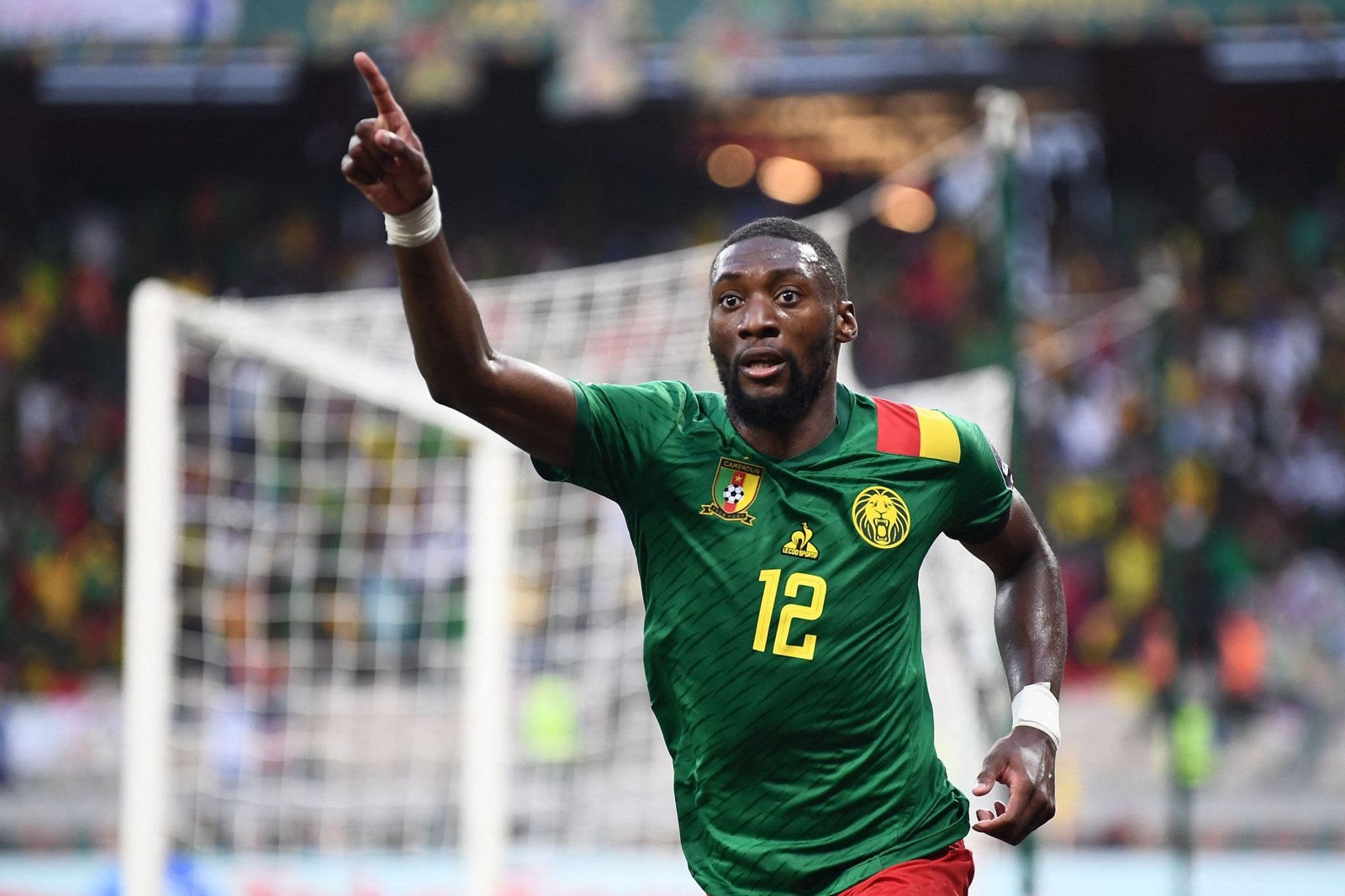 Karl Toko Ekambi celebrates in a past match

Elsewhere at the National Stadium in Dar es Salaam where Burundi host their home matches, they were beaten 1-0 by Cameroon.

The Indomitable Lions played better and had most of the chances and pressed from the word go.

They ultimately broke the deadlock in the 31st minute when Karl Toko Ekambi curled a freekick beyond the wall and into the top left corner after Vincent Aboubakar had been fouled at the edge of the box.

Cameroon came close to doubling their lead at the stroke of halftime when Aboubakar met a cross from the right, but his header came off the outside of the bar.

In the second half, the visitors continued to dominate and they had another chance in the 67th minute. Some well worked build up at the edge of the Burundian box saw Eric Maxim Choupo Moting find shooting space, but the latter’s rasping effort was deflected for a corner.

A minute later they came close again, this time Aboubakar’s effort from inside the box being cleared off the line by Frederic Nsabiyumva.

In the final 20 minutes of the match, Burundi pushed more in attack, but couldn’t find an equalizer.

Earlier on at the St. Mary’s Stadium in Kitende, South Sudan conceded two goals in extra time as they slipped to a 3-1 defeat against Mali. 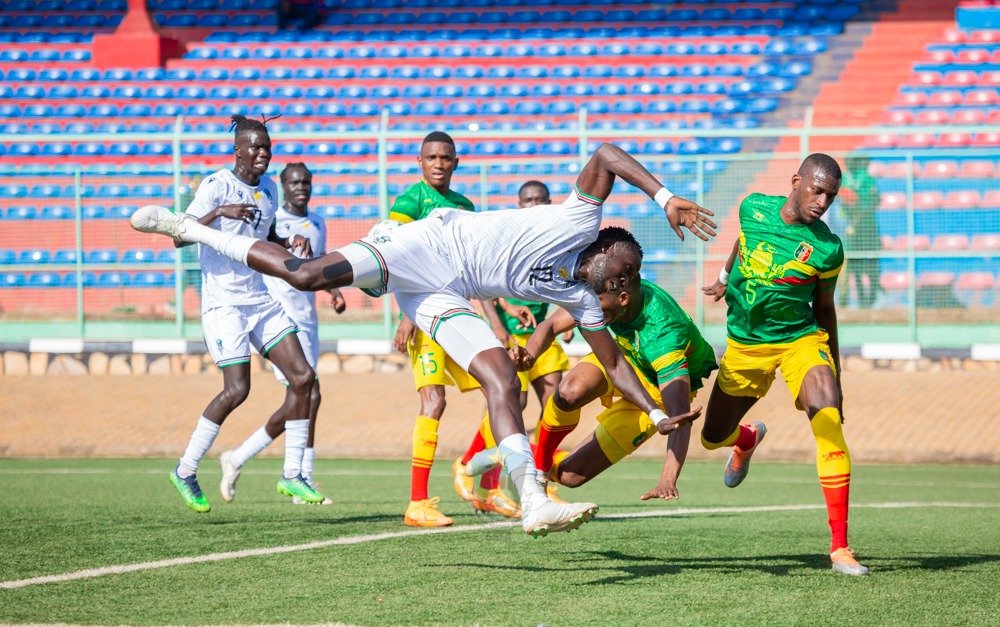 Action between South Sudan and Mali

The Bright Stars had seemingly done well to contain Mali and were headed for a 1-1 draw, but they lost concentration in the last three minutes of added time as substitutes Sekou Koita and Aliou Dieng scored in quick succession.

Mali scored the two goals despite being a man down after Ibrahima Kone was sent off in the 78th minute after swinging an elbow at Toha.

South Sudan had had a good start and were rewarded on the half hour mark when Toha scored the opener, bumbling the ball home after skipper Peter Manyang’s initial effort from a freekick had come off the bar.

But in the second half, Mali were revived when Camara scored with a low finish from inside the box. Despite being a man down after 78 minutes, they pushed on and in the 93rd minute, substitute Koita who had spent less than three minutes on the pitch headed the second from a Mousa Djenepo volleyed cross from the left.

Two minutes later, Dieng who had come on in the 84th minute sealed the victory with a sweet low shot after being set up by Nene Dorgeles.

With the win, Mali top Group G with six points while South Sudan remain bottom after back to back losses.