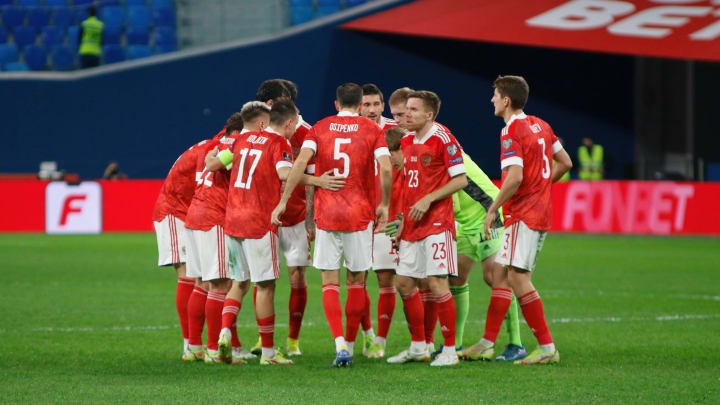 World’s football governing body FIFA and UEFA have handed Russian teams a ban from the clubs and international competitions, denying them entry to the 2022 World Cup and Women’s Euro 2022.

The decision means Spartak Moscow will be removed from the Europa League last 16, where they were due to face RB Leipzig – they are the only Russian Country in the tournament.

UEFA has also ended its relationship with Gazprom, the Russian state-owned energy giant that was a major sponsor of the Champions League – this has come a few days after Saint Petersburg was ripped off the opportunity to host the 2022 Champions League final.

A joint statement from FIFA and UEFA as seen by SportsLeoread: “Football is fully united here and in full solidarity with all the people affected in Ukraine.

The Russian National team in a past event. The team has now been handed a ban from playing in the FIFA World Cup 2022 qualifiers by FIFA and the Euros by UEFA. | PHOTO: Getty Images |

“Both presidents [Gianni Infantino and Aleksander Ceferin] hope that the situation in Ukraine will improve significantly and rapidly so that football can again be a vector for unity and peace amongst people.”

The entire sporting world has called for sanctions to be imposed on Russia following Vladimir Putin’s invasion of Ukraine last week.

Poland, Sweden and the Czech Republic – Russia’s World Cup play-off opponents – all announced an intention to boycott their fixtures, although FIFA’s initial sanctions allowed the Russian Football Union to put forward a team playing under a different name and flag in a neutral location.

But this FIFA decision was widely criticised, including by players’ union FIFPro, which wanted more than “the lightest of sanctions” and said Russia’s continued involvement in international competition was “not a possibility”.

That was a view shared on Monday by the International Olympic Committee (IOC), which said Russian and Belarusian athletes should be excluded from sporting events to “protect the integrity of global sports competitions”.

FIFA subsequently changed its stance in a joint-announcement with UEFA, ruling Russia – hosts of the 2018 World Cup – out of tournaments including this year’s two showpiece events in Qatar and England.

Russia were set to face Poland and then either Sweden or the Czech Republic in World Cup qualifying, while they had already reached the Women’s Euros, drawn into a group with Sweden, the Netherlands and Switzerland.