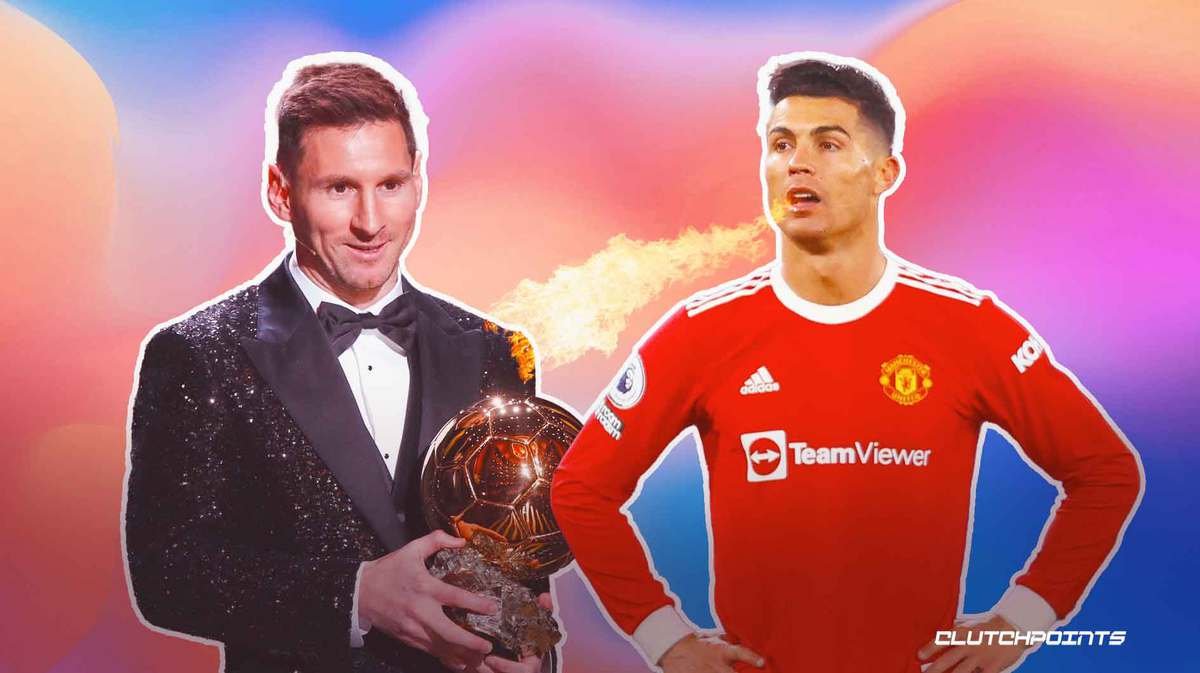 The Ballon d’Or award given to Lionel Messi on Monday by France Football has seemingly affected Cristiano Ronaldo. The football players past and present have criticized the manner at which the award was awarded to Lionel Messi saying Lewandowski deserved it more than Messi.

Messi picked up a record seventh time Ballon d’Or of his career in Paris, with Robert Lewandowski finishing second and Jorginho third.

But Cristiano Ronaldo who finished sixth in the ranking is not a happy man seeing his rival Lionel Messi top the list.

The 36-year-old commented on an Instagram post which rallied off the reasons why Messi’s Ballon d’Or was “theft”.

The post from the account @cr7.o_lendario – which Ronaldo follows blasts: “The prize goes to Messi, who only won the Copa del Rey with Barcelona and hasn’t scored a goal against Real Madrid since Ronaldo left. He disappeared in the big games of the season.

“He won the Copa America that was supposed to be every four years but now they do it practically every year. He didn’t score in the final or semi-final. And he’s having a weak season with PSG individually.” 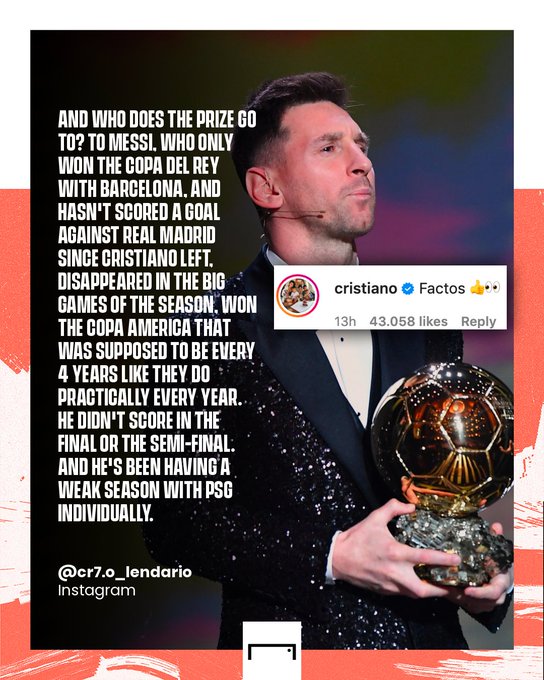 Ronaldo replied to this message with the word: “Facts” together with two emojis of a thumbs up and popped-open eyes.

Although it is clear that Ronaldo did not deserve to win the Ballon d’Or this year, it is understandable why he feels that Messi didn’t either.

Messi barely made a dent in the biggest club competition of 2021, the Champions League. His Barcelona side was thrashed 5-2 on aggregate by PSG in the last 16.

As the posts say, Barca only won a minor trophy in the form of the Copa del Rey but fell short in La Liga. They finished third seven points behind champions Atletico Madrid even if Leo did finish top scorer in Spain with 30 goals (Ronaldo did the same in Serie A and also won the Italian Cup and the Super Cup)

Most of Messi’s credit comes from lifting the Copa America with Argentina – the first major senior trophy of his international career. He was joint-top scorer and named Best Player at the tournament.

However, the Copa America was miles away from being an elite tournament in 2021. Ridiculously, in the group stages there were two pools of five teams in which four nations qualified from each for the quarter-finals.

Argentina then beat Ecuador 3-0 in the last eight before a fortuitous penalty shootout victory over Colombia to reach the final. In the showpiece, they won a dreadful game against Brazil 1-0. 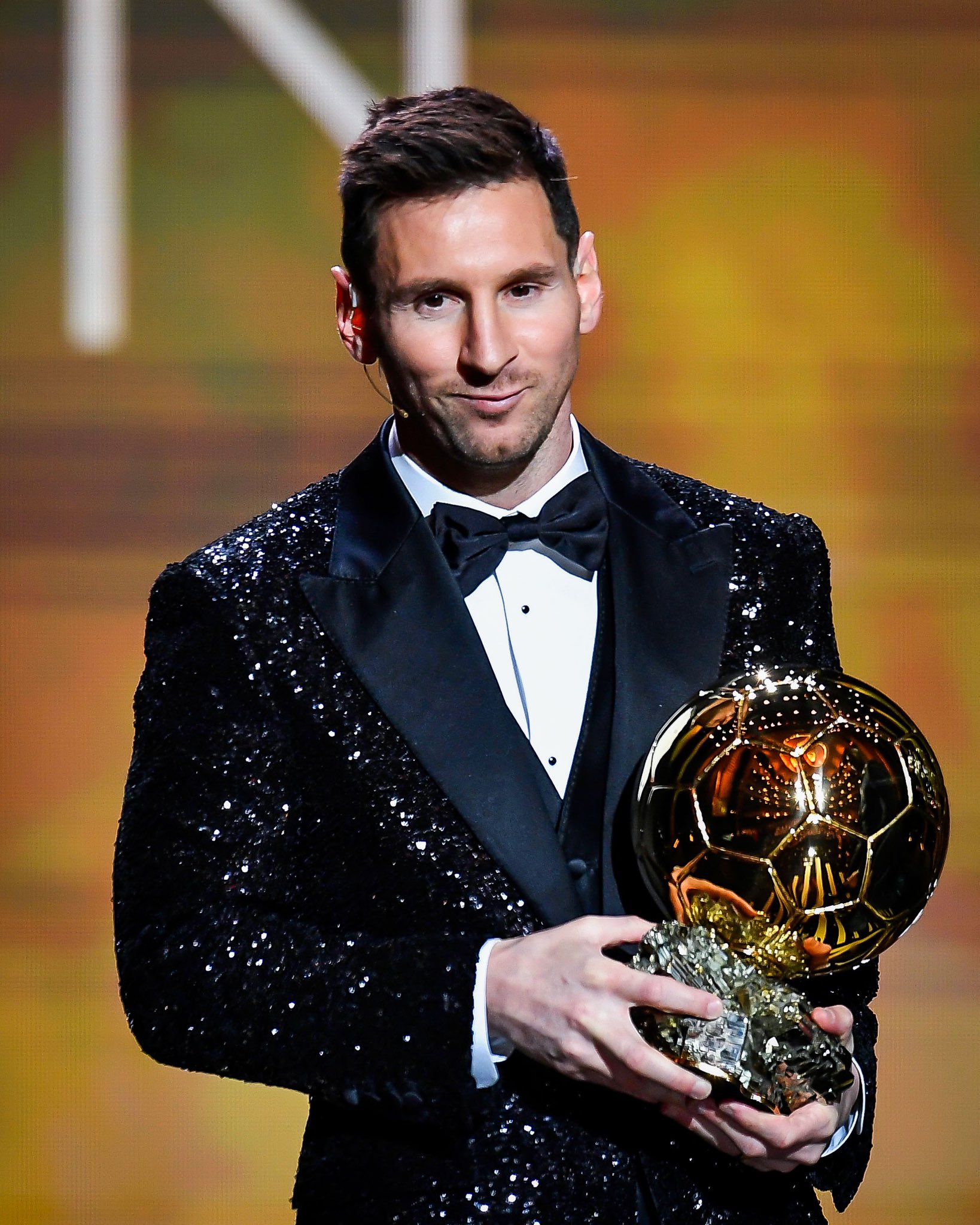 South American international football is the weakest right now it has been for decades. This is demonstrated by the CONMEBOL World Cup qualification campaign where Brazil and Argentina are racing ahead of the rest of the pack. Nations like Uruguay, Chile and Colombia are still building their teams around the veterans they were a decade ago.

And as the pro-Ronaldo post states, when it came to the decisive matches in the Copa America, Messi produced little as he failed to score in the semis or final.

Finally, in the 2021-22 season, Messi has scored just one Ligue 1 goal for PSG and four in all competitions. Ronaldo clearly looks at his own tally – 10 goals since returning to Man Utd – and becomes even more frustrated.

With Messi now on seven Ballons d’Or and Ronaldo on five, the Portuguese know he will likely end his career having won less Golden Balls than his great rival.