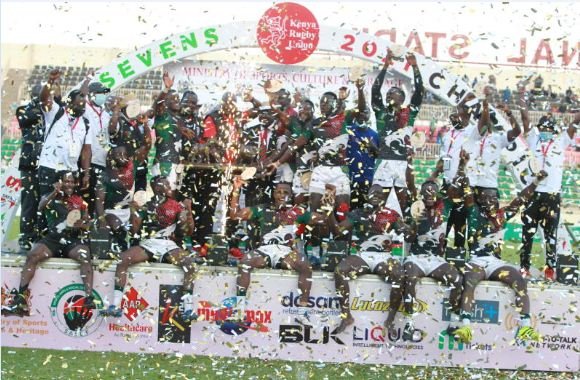 Kenya Shujaa eased past Germany 12-5 in a staggering final to win the 23rd edition of Safari 7s rugby tournament at Nyayo National Stadium in Nairobi on Sunday 31, October. Meanwhile, Kenya Lionesses successfully retained the women’s titles after emerging tops in the round-robin encounter ending a successful week for the Kenyan sides.

Grace Adhiambo emerged as the top scorer with 66 points while Janet Okello scooped the Top Try and Most Valuable Player awards in the women category held at Nairobi. 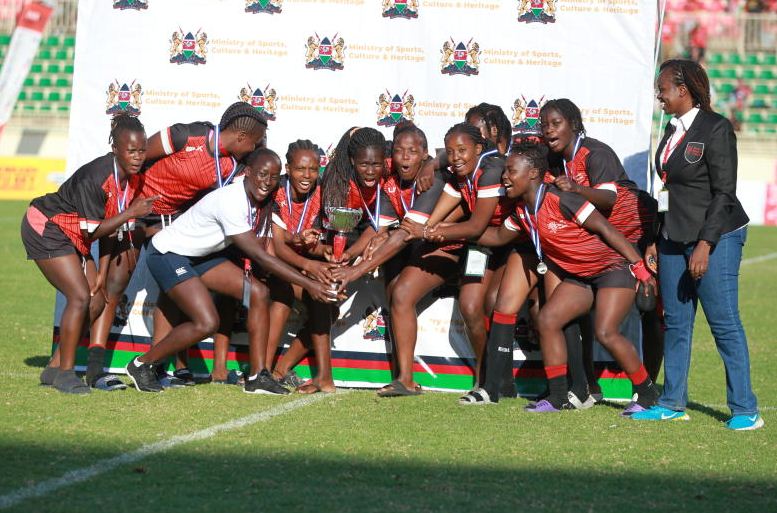 In the entertaining, men’s final, Shujaa were put ahead by the crowd’s favourite Alvin ‘Buffa’ Otieno, who eased through the well-organised German defence to score a try which was successfully converted by Levy Amunga to give the home side a 7-0 lead amidst wild crowd cheers.

The Europeans reduced the deficit to 7-5 with an unconverted try from Jack Hunt before the break.

Johnstone Olindi then gave the hosts victory with a last-minute unconverted try that sent the crowd at the stadium into jubilations.

Shujaa head coach Innocent Simiyu thanked the fans for turning up in large numbers to support the team saying that many players caught his eyes in the tournament, especially from the Red Wailers and Samurai International. Kenya Shujaa celebrating after coming on top in the 2021 23rd edition of the Safari 7s, defeating Germany 12-5 in finals at the Nyayo National Stadium on Sunday 31, October. | PHOTO: The Star |

German head coach Darmian McGrath admitted Shujaa were a tough side but lauded the professionalism that was used to organise the event.

On their path to the final, Shujaa edged defending champions Morans 19-17 in the semis while Germany beat Zimbabwe a staggering 31-14.

The Shujaa versus Morans tie was such a lively and entertaining match that left spectators on the edge of their seats. Otieno, who was the fans’ favourite, endeared many what with his antics as both sides displayed skills, tact and hard tackles that saw some players sent to the edge of the match.

It was however not that entertaining for Shujaa player Archadius Khwesa who suffered several knocks that saw him leave on a stretcher.

“Rugby is a physical game, Khwesa’s injury was unfortunate. That’s not what we want to see in the sport,” Morans assistant coach Kevin Wambua said. “We wish the young man recovery.”

Wambua lauded Morans’ performance in the tournament saying they gave a good account of themselves despite failing to defend the trophy. Morgan’s beat Red Wailers 12-5 to finish third.

Wambua said they haven’t trained together for a long time, but he is glad they did the jersey proud. The tactician added that they had a slow start in the tournament, but eventually found their rhythm and were able to make it to the semis.

Wambua added that losing to Shujaa in the semis by two points was a bit tough for the boys but admitted it was a good game. He went on to say that he hopes his young lot of players caught the eyes of national team coach Innocent Simiyu with their brilliant displays at the weekend.

The third and fourth playoffs in the tournament saw Kenya Morans defeat Red Wailers 12-5 to bag the third-best team in Safari 7s.