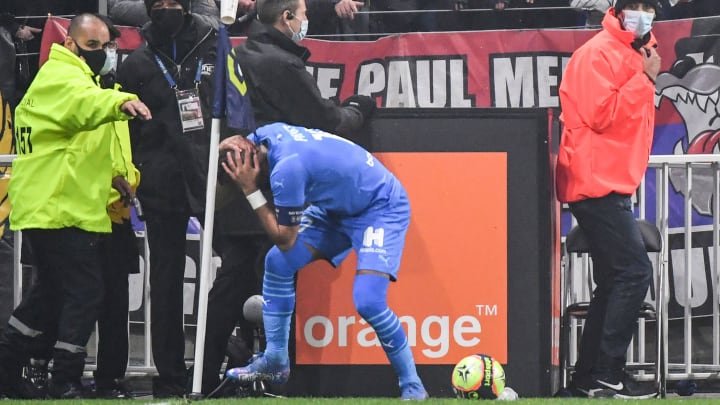 Ligue 1 has been hit by a further crowd mess with Lyon vs Marseille clash being postponed after Marseille player Dimitri Payet was hit by a bottle while taking a corner early in the first half.

French football has been blighted by similar incidents in recent years and there was no difference from this shame on Sunday night.

Just four minutes into the game at the Groupama Stadium, Payet was struck by a fully-filled water bottle thrown from the crowd. The blow caused the forward to sink to the turf and he required on-field treatment.

Soon after, referee Rudy Buquet told both sets of players to return to the dressing room, as is the procedure in these situations.

Following a break of over an hour, Lyon ejected the guilty supporter from the stadium and warned that further misbehavior in the stands would result in the match being abandoned.

Marseille forward Dimitri Payet was hurt by the water bottle that hit his head in the clash against Lyon on Sunday, 21 November 2021. The match was suspended after the incident. | PHOTO: PHILIPPE DESMAZES/GettyImages |

After this the Lyon players emerged to warm up, suggesting that the match would be resumed. However, they soon returned to the dressing room, amid disagreements between the French Football Federation and local authorities over whose responsibility it was to call off the match.

This uncertainty was eventually ended just after 22:30 local time when it was confirmed that proceedings would not be resumed.

Speaking as a television pundit, Thierry Henry said: “What is damaging is that it will have repercussions. In England, for example, it will be seen. A match interrupted by imbeciles. It’s a shame because it puts a strain on our beautiful league.”

After the match, Lyon Football Club CEO Jean-Michel Aulas said that there have been a number of delays. Regarding the incident, it was a bottle thrown at Dimitri Payet and sent him apologies on behalf of the club. Aulas further said that the perpetrator was immediately reported and caught claiming that it’s an isolated act.

After a rather long discussion, a decision was taken by Mr. Buquet. The referee summoned everyone a second time to announce that he had changed his mind and that the game has been suspended until further notice.

The match was postponed after an hour and a half. Our players followed Mr. Buquet’s orders by returning to warm up. Then the referee changed his mind so they returned to the locker room. They wisely waited for the decision and acceded to it.

Aulas also confirmed to the media that the perpetrator has been arrested, saying the individual in question was isolated.

The French Football Federation has been criticized for its failure to stamp out crowd disorder in Ligue 1. There have been numerous incidents recently, including Marseille ultras storming the club’s training ground back in 2020 to voice their displeasure at the team’s performances.

This season Marseille fans have again been embroiled in violent clashes during games against Montpellier, Angers, and Nice – though the latter was sparked by an opposition supporter throwing a missile at Payet.

Marseille is not the only side with issues, though, as this latest incident shows. Ligue 1 is yet to announce when the match will be replayed.