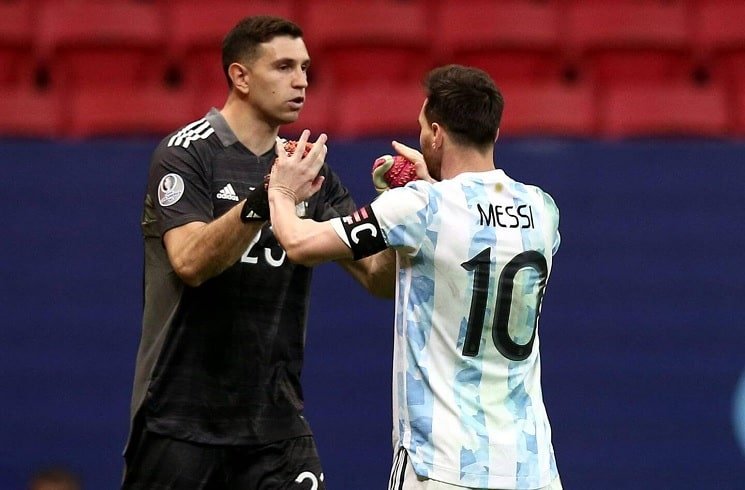 This has even got the better of world arguably great Lionel Messi who has gone out to praise Emiliano’s quality in the goal post in other words reminding Arsenal of what they are missing after overlooking him during his Emirates days.

Since moving to Aston Villa Martinez’s form has risen two folds a positive affirmation that he made the right decision to swap Arsenal for Aston Villa when they came knocking.

Paris Saint Germain star Lionel Messi who did not hide his emotions on that fateful night after Argentina stunned Brazil on spot-kicks heaped praises on Martinez and was even more this time round in their preparations to Qatar world cup 2022 qualification when they defeated Uruguay 3-0 on Sunday.

Martinez pulled off a brilliant save to deny Luis Suarez before Argentina opened the scoring and eased to Victory with Lionel Messi playing the integral part in the team.

“When they arrive he always responds,” Messi said.

“The truth is that, once again, he established himself after the Cup (Copa America).

Lionel Messi speaking to media after the game hailed Martinez as the best goalkeeper in the world from the way he has dedicated himself to deal with shots sent to him.

“Impressive and we have one of the best goalkeepers in the world, without a doubt. We take advantage of it.” Messi responded to question asked about his goalkeeper.

Arsenal sold Martinez in September last year despite the player enjoying a fine ending to the 2019-20 season.

Bernd Leno was given the number one jersey and Martinez forced to sit on the sidelines as a number two again.

He decided to seek a move elsewhere and to plug that gap Arsenal signed Aaron Ramsdale for $40m.

Arsenal fans took to social media to react to Messi’s comments with one supporter writing: “Someone should tell Messi to stop talking about a transfer when he has no idea what actually went on.”

“Ramsdale is awesome but the Martinez sale was a mistake,” said another while a third fan added: “I have to agree with Messi.”

“We did not need Messi to say something, it was a poor decision to sell Emi,” another said.

A fifth fan said: “There is an equally long list of Arteta’s bad buys as there is for his bad sell-offs.”