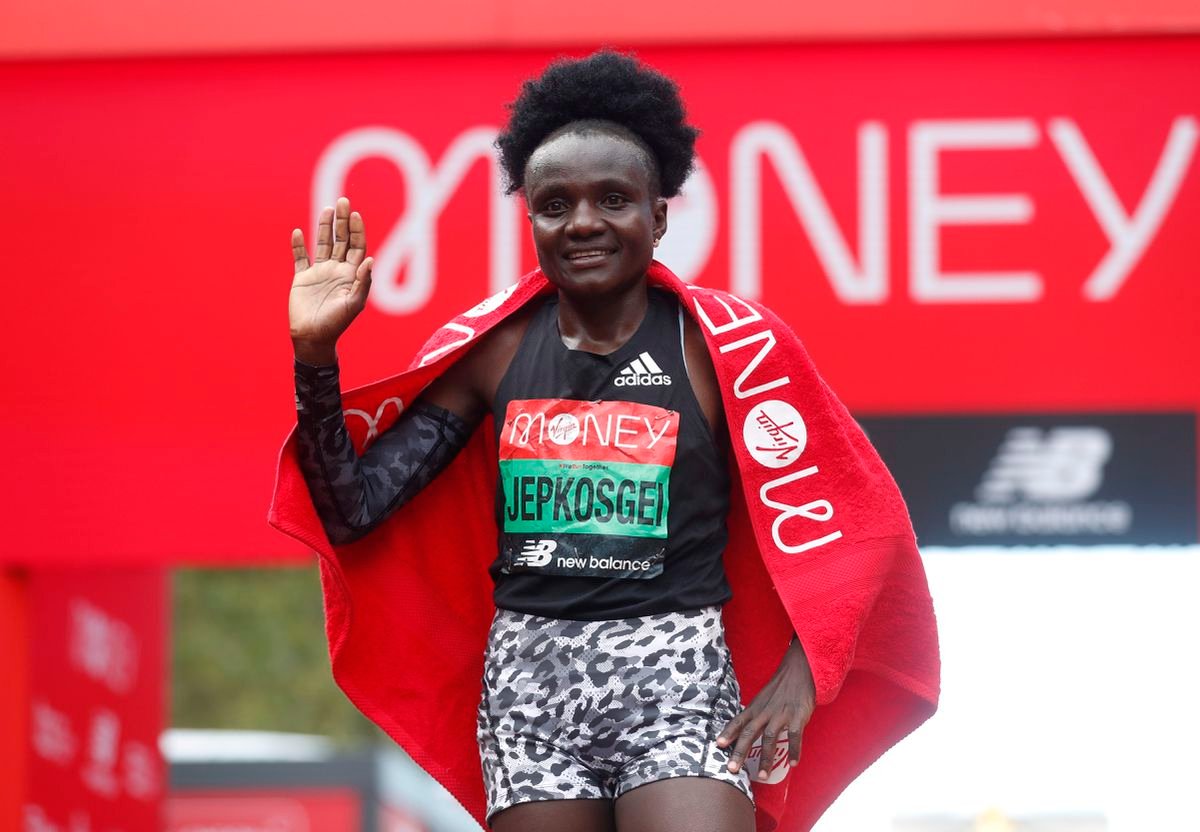 Jepkosgei finished 15 seconds ahead of Ethiopia’s Degitu Azimeraw with 02:17:58 as Bekere Eshete finished in the third position with 02:18:18.

“I’m very excited. Such a beautiful day for running,” Jepkosgei Said after the Race

She added that the spectators were among her greatest motivation during the race.

“I’m so happy for the London crowd. Every kilometre there were people cheering all the way.”

However, Bridgid Kosgei could not defend her Championship as she finished at the fourth position 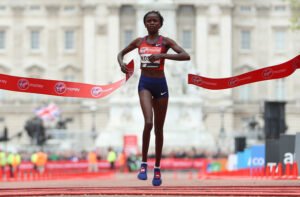 Kosgei believed she’ll be able to defend her title despite the injury strain during the Tokyo Olympics.

“Before I came here I was running in the Olympics last month, my body was still very tired but I did a lot of preparation to correct this,” Kosgei said Friday.

Kosgei was chosen to lead the Kenyan women’s marathon squad for the 2020 Summer Olympics in Tokyo, Japan among Cheruiyot and Ruth Chepng’etich, and it was Kosgei’s first appearance at the Olympics. In February 2021, Kosgei was confirmed in the Kenyan marathon team for the rescheduled 2020 Summer Olympics, alongside Cheruiyot, Chepng’etich and Peres Jepchirchir. At the Games, she finished second behind Jepchirchir clinching a silver medal.

On the other hand, Jepkosgei made her debut as a professional level runner at the 2015 Nairobi Half Marathon, where she finished fifth in 1:14:06 minutes. She knocked her best down to 1:09:09 minutes at the following year’s First Lady’s Half Marathon in the Kenyan capital, placing second to Valentine Kipketer. She improved two seconds further in winning the Karlovy Vary Half Marathon, which placed her in the top 35 runners that year.

A member of the Kenya Defence Forces, she was twice runner-up at their track championships in 2016 in the 5000 metres and 10,000 metres. A third-place finish in the 10,000 m at the Kenyan Athletics Championships led to her first international selection for the 2016 African Championships in Athletics. There she took the bronze medal in a personal best of 31:28.28 minutes.  Jepkosgei ended her breakthrough year with a runner-up finish at the Prague Grand Prix and a win at the Marseille-Cassis Classique Internationale.

Charlotte Purdue, who controversially missed out on Tokyo 2020 selection finished 10th in a personal best 2:23.26, just short of Mara Yamauchi’s second place on the British all-time list, but well inside the qualifying standard for next year’s World Championships in Oregon.

“Do I feel vindicated? Yes, definitely,” said Purdue. “The London Marathon is such a special event. It is not like a ‘B’ race. This is my Olympics. It is as special to me to run like this in London.”

In Men’s Elite race Lemma won the race after finishing third last year. His time of 2:04.01 was the sixth-fastest ever for the course while Kenya’s Vincent Kipchumba finished in the second position clocking 2:04.28 and Mosinet Geremew third in 2:04.41. 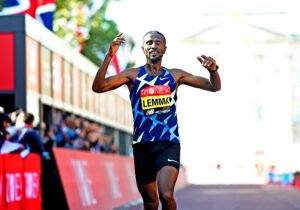 Unlike other years a number of changes were in force this year to try to reduce the risk of spreading coronavirus with those running in central London required to show a negative lateral flow test for Covid-19.

Several world records have been broken in this year’s race, including the fastest marathon wearing Wellington boots and the fastest dressed in rugby kit.