Fred sends message with his epic performance with Brazil 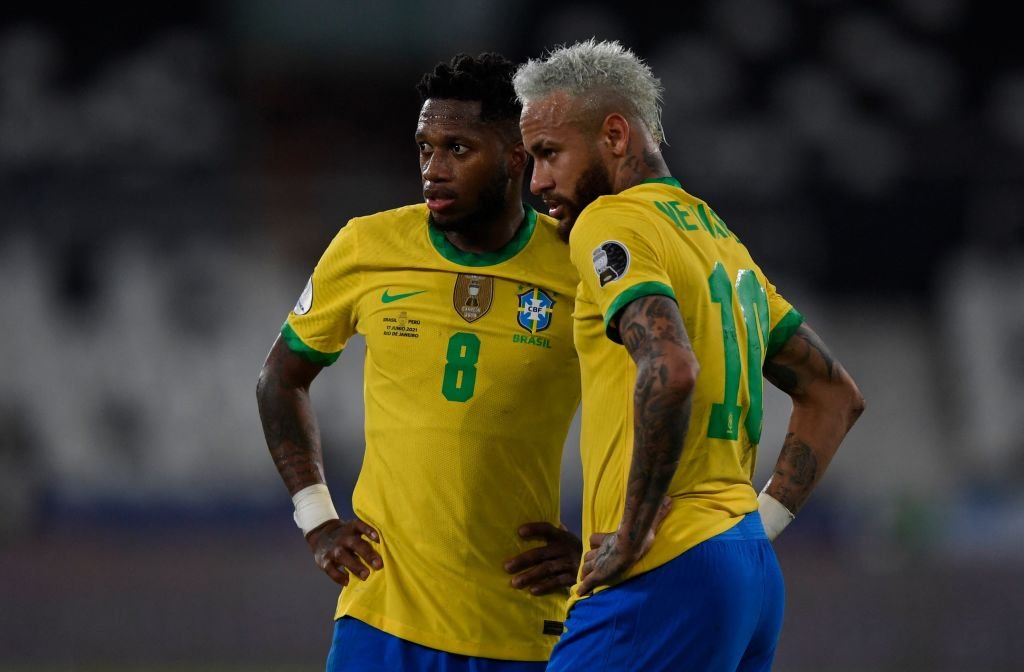 The Brazilian  might be enjoying himself at Man United but truth is most of Man United fans don’t like him, infact he has been trolled with also Ole Gunnar Solskjaer questioned of why he starts Fred alongside McTominay.

The Man United midfielder has had a mixed time at Man United since he arrived at the Club from Shakhtar Donetsk in 2018, with good displays often being undermined by silly mistakes and runs of poor form.

During Manchester United premier league home game against Everton, Fred was pushed off by Demari Gray who played a build up to Everton’s equalizer through Andros Townsend who struck low, with motionless Degea watching the ball in the net. Fred provided an assist in 4-1 Brazil win against Uruguay; photo/courtesy

Even Ole Gunnar Solskjaer on February this year in a match against Chelsea was caught laughing at Fred’s effort long shot to score.

The game, while better than the corresponding fixture at Old Trafford in October last year, proved to be a disappointing affair with neither side doing enough to win.

Yet Solskjaer had an eventful game on the touchline. The United boss ignored a ranting Thomas Tuchel during a VAR check and reacted hilariously to Fred’s long shot during the second half.

Taking the chance to unleash an effort on goal, Fred walloped his shot towards goal with his weaker right foot.

In truth, his shot wasn’t too far away but Solskjaer was left amused by the attempt and gave Fred an exaggerated thumbs-up.

But maybe Fred’s strengths have been underutilized by United. Having played the majority of his 129 appearances as a defensive midfielder, Fred has become symbolic of the club’s failure to secure a leading player in that position.

Perhaps we’ve got him all wrong though. What if he’s been played out of position this whole time?

Some people will scoff at the mere thought of Fred having a long-term future in United’s midfield. But they haven’t seen the gorgeous assist he produced during Brazil’s 4-1 win over Uruguay in a World Cup qualifier.

After receiving the ball around 30 yards from goal, the 28-year-old took a touch and pinged a delightful lofted pass over the entrenched Uruguayan defense into the path of Neymar.

Bringing the ball down the care of a man handling his newborn child, Neymar rounded the goalkeeper before ramming Brazil into an early lead.

Fred’s performance in Manaus was epic he did not only produce that assist but his passing accuracy was top notch registering a 93%, he also managed to complete a 100% of his dribbles, won 62% of his duels and made two crucial interceptions.

Interestingly, Fred lines up for Brazil alongside Liverpool midfielder Fabinho a more obviously defensive player which afforded him more freedom to get forward and create.

The insistence on using Fred as a destroyer, rather than a creator, is the factor that looks likely to hold United back. Results have been largely good, but United rarely seem to have control of games and tend to rely on individual brilliance to win matches.

For example, Fred was paired with Paul Pogba against Wolves in August and floundered as the home side dominated proceedings only to somehow lose 1-0.

Both Scott McTominay and Nemanja Matic perform the holding role more effectively than the Brazil international.

So maybe it’s time for Fred to be let off the leash and start redefining himself as a midfielder with a lot more to offer.

Brazil won 4-1 against Uruguay with Fred helping them get the ball rolling when he set up Neymar’s opening goal.