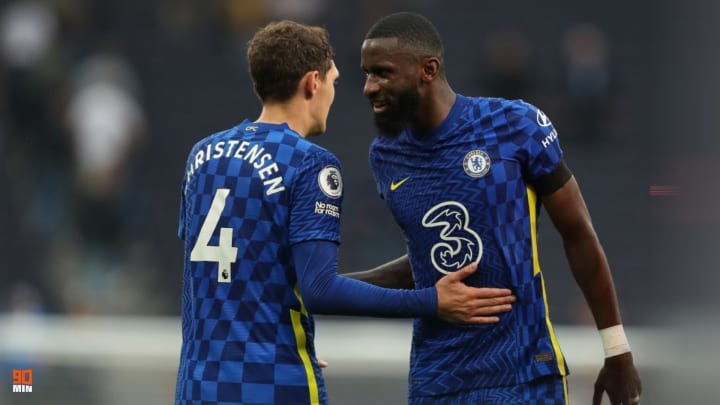 Chelsea’s 2021/22 season in all competitions may be going according to plan on the pitch, but off the pitch, the club is facing up to the possibility of losing three key first-team defenders ahead of next season – unless they can convince Andreas Christensen and Antonio Rudiger, as well as captain Cesar Azpilicueta, to sign new contracts.

25-year old Andreas Christensen, who has just eight months remaining on his current deal, has been unable to agree on a new contract at Stamford Bridge, following a standout 12 months that’s seen his reputation and standing in the game considerably improve.

It’s a similar situation for German international Antonio Rudiger who in September was nowhere near agreeing to a new deal at the London-based club, and to even consider staying he wanted to become one of their highest-paid players in the club after summer signing Romelu Lukaku.

Chelsea defenders Andreas Christensen and Antonio Rudiger are both out of contract next summer. | PHOTO: James Williamson – 90Min/Getty Images |

That stance has not trembled and Chelsea is now faced with an even bigger problem – Rudiger is wanted by virtually every major club in Europe including local rivals who are ready to pay his demanding wages.

Ligue 1 side Paris Saint Germain, Bundesliga giants Bayern Munich, and Chelsea’s city rivals Tottenham were already circling – making it clear they would be prepared to make him one of the highest-paid defenders in the world – but there is also strong interest from Premier League champions Manchester City; a club more than capable of paying enormously high wages.

If those four options weren’t enough for Rudiger, he also has La Liga giants Real Madrid, Barcelona, and Atletico Madrid, and Serie A side Juventus ready to make him an offer, while there’s also genuine interest from Liverpool and Manchester United.

Rudiger can officially listen to offers from 1 January, and it’s understood that Chelsea’s hierarchy has accepted that the 28-year-old is now ‘more than likely to leave at the end of the current season.

Chelsea manager Thomas Tuchel had previously insisted that committing Rudiger to a new contract should be one of Chelsea’s top priorities, but it appears the German is struggling to get his way.

Tuchel’s distress will only increase with the news that Christensen has so far failed to agree to terms on a new contract. The 25-year-old enjoyed a brilliant European Championship with Denmark and has been in excellent form for the best part of a year – keeping 42 clean sheets in his last 52 appearances for club and country.

Like Rudiger, he is out of contract next summer, and although the Dane is not demanding as much money as his teammate – Rudger is looking for a contract worth in excess of £300,000-a-week – he is looking for a substantial pay rise that reflects his continued fine form.

As things stand, Chelsea isn’t prepared to meet his demands, to such an extent that talks have come to a halt. That leaves the club just two months to re-engage in talks and agree on a financial package, or they run the risk of Christensen negotiating a transfer in January to a club willing to stump up the cash.

Chelsea captain Cesar Azpilicueta will also be out of contract at the end of this season. | PHOTO: Clive Rose/GettyImages |

To make matters worse, Chelsea – who also let Kurt Zouma join West Ham in the summer – are yet to tie down captain Cesar Azpilicueta to a new contract, although they are confident that he’s committed to the club and is keen to stay, having played for the club for the last nine years with this season his tenth with the Blues.

Reigning La Liga Champions Atletico Madrid is leading the chase for Azpilicueta, should he be available, as they see him as an ideal replacement for England international Kieran Trippier – who is likely to leave Spain at the end of the season to make a return to England with strong interest from Manchester United.

Another defender out of contract is 37-year old Thiago Silva who has been superb so far for Chelsea this season and the club will think of tying him for another year, should he continue with his impressive performance.