The team GB’s 4x100m relay silver medalist in the Tokyo Olympics sprinter CJ Ujah’s B samples of a banned substance were on Tuesday confirmed positive by the International Testing Agency (ITA).

Through a statement issued by the agency B sample had confirmed the result of his A-sample. The case had been referred to the Court of Arbitration’s Anti-Doping Division (CAS ADD).

The Olympian was provisionally suspended following the result of the A sample last month and released a statement on August 14 saying he was shocked and he has never used banned substance.

‘To be absolutely clear, I am not a cheat and I have never and would never knowingly take a banned substance.’ Said Ujah

He added that he loves his carrier and he clearly understands his responsibility as an athlete and as a team member.

‘I love my sport and I know my responsibilities both as an athlete and as a team-mate.’ He added.

The team that includes Zharnel Hughes, Richard Kilty and Nethaneel Mitchell-Blake are now at risk of being stripped off the silver medal to Canada. 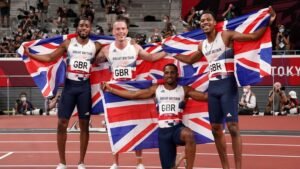 “The CAS Anti-Doping Division will consider the matter of the finding of an Anti-Doping Rule Violation and the disqualification of the men’s 4×100 relay results of the Great Britain team,” the ITA said in a statement.

“In this regard, pursuant to the IOC ADR and the World Athletics Anti-Doping Rules: ‘where the athlete who has committed an Anti-Doping Rule Violation competed as a member of a relay team, the relay team shall be automatically disqualified from the event in question.'”

“The case will then be referred to the Athletics Integrity Unit to follow up on sanctions beyond the Olympic Games Tokyo 2020.”

Hugh Robertson, British Olympic Association’s chairman has said it would be devastating if other members of the team were stripped of their silver medals over Ujah’s anti-doping rule violation.

The general trend among authorities and sporting organizations over the past several decades has been to strictly regulate the use of drugs in sport. The reasons for the ban are mainly the health risks of performance-enhancing drugs, the equality of opportunity for athletes, and the exemplary effect of drug-free sport for the public. Anti-doping authorities state that using performance-enhancing drugs goes against the “spirit of sport”.

Doping betrays the trust of the spectators and sponsors who have supported an athlete, and when that athlete is competing on behalf of his/her country, it betrays a nation’s hopes. In recent times, institutional doping has become a major issue which has transcended the confines of the sporting world, and has led to a massive loss of public trust in the integrity of sport.

An anti-doping rule violation occurring during or in connection with an Event may, upon the decision of the ruling body of the Event, lead to Disqualification of all of the Athlete’s individual results obtained in that Event with all consequences, including forfeiture of all medals, points and prizes.