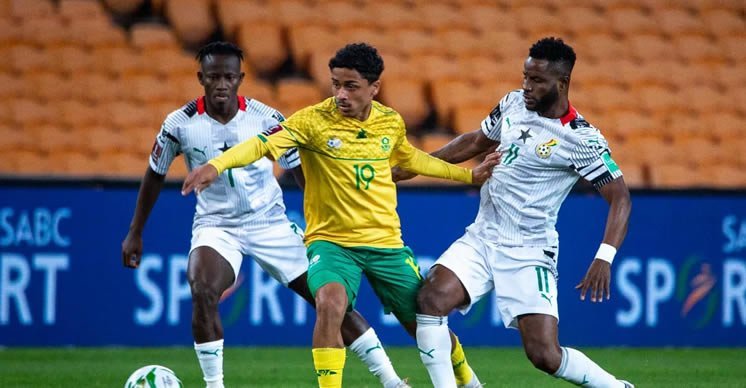 A late goal by Bongokhule Hlongwane was enough to give South Africa all three points against Ghana at the FNB stadium in Johannesburg on Monday.

Bafana Bafana leapfrog the Black Stars after the win and now top Group G in the World Cup qualifiers with four points.

Ghana started strong and were awarded a free kick on the edge of the penalty box after Rushine De Reuck brought down Joel Fameyeh who was through on goal. Mubarak Wakaso stepped up but his effort was calmly collected by Ronwen Williams. 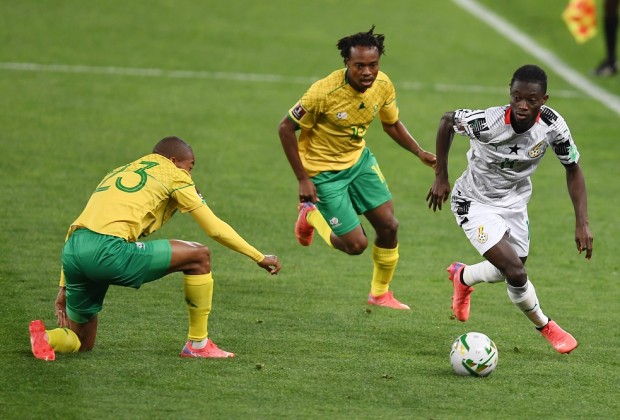 Hugo Broos’ men grew into the game and started to dominate proceedings. South Africa came close after Richard Ofori spilled a free kick, with the resulting rebound fired over the crossbar.

Percy Tau thought he had given Bafana Bafana the lead on the stroke of half time with a powerful diving header. The goal was ruled out for offside but upon further replays, Tau looked to have been played on by Djiku.

Charles Akonnor’s men dropped the intensity in the second half as South Africa continued to pile the pressure. Ofori completely misdjuded a cross leaving an empty net for Evidence Makgopa who fluffed his lines.

Seven minutes from time, a low cross was redirected by Hlongwane into the net needing help from the post.

It’s the first time South Africa have beaten Ghana in competitive football for 21 years. Ghana’s five-game unbeaten streak in World Cup qualifiers has also been breached leaving the Black Stars with work to do.

Elsewhere, Liverpool have said they are “satisfied that Naby Keita is safe and well” even as they work to take him back at Anfield after his International game Guinea vs Morocco was postponed following unrest in his home country.

The 26-year-old was on international duty in his homeland when a group of soldiers detained president Alpha Conde and volatility in the country- hours of heavy gunfire were reported around the presidential palace on Sunday – resulted in Guinea’s World Cup qualifier against Morocco on Monday being postponed.

A Liverpool spokesman said the club was in “constant contact” with Keita.

“We have had regular communication via his national team management,” said the club spokesman in a statement to the PA news agency.

“We are satisfied that he is safe and well cared for. Obviously the situation is fluid and we will maintain regular dialogue with the relevant authorities as we work to get Naby back to Liverpool in a timely and secure manner.”

The Morocco squad were escorted to the airport and have left the Guinea following embassy-level negotiations.

Moroccan players posted videos of the squad and staff smiling and singing a rendition of their national anthem as their flight departed Guinea.