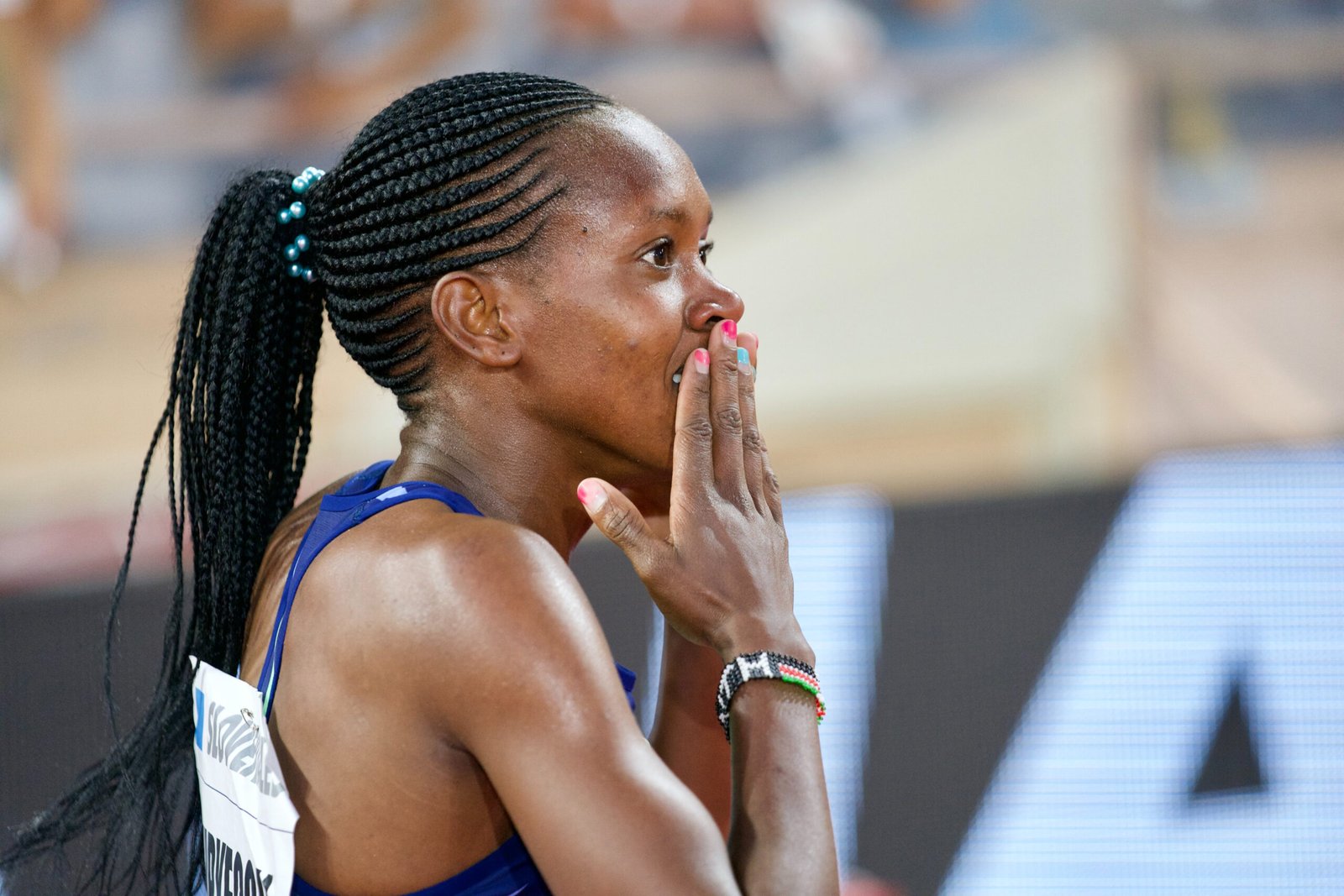 Kipyegon clinched victory in the 1500m setting a new personal best time and a national record in an emphatic competition with Netherlands star Sifan Hassan, who has beaten her twice previously this season.

The pint-sized smiling assassin crossed the line in 3mins, 51.07 secs for the new national record. She breaks her own mark of 3mins, 56.82secs which she set during the Diamond League leg of Shanghai in May.

“I knew Sifan was going for a fast race and my goal was to run a fast race here and I thank God that was,” Kipyegon said after winning the race in Monaco. She added; “I am really looking forward to Tokyo and I know it will be a very hard competition but I hope to go there and defend my title.”

Hassan, who is also in form having set the world record for the 10,000m last month in Hengelo chose to set down her marker early in the race. She was tucked right behind the pacemaker with Kipyegon lurking on her shoulder. 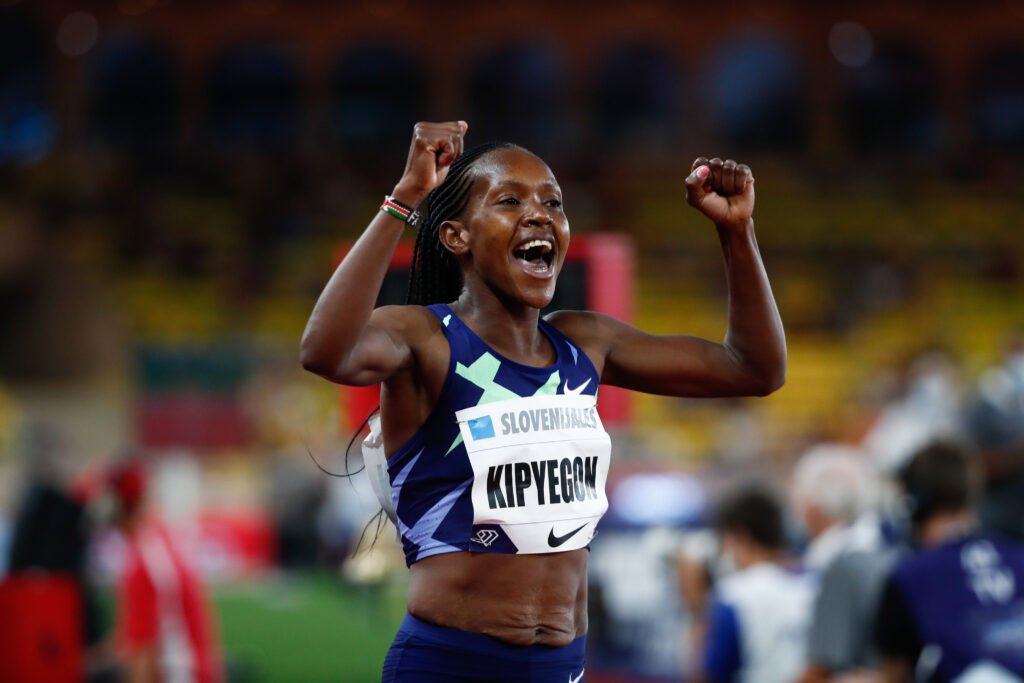 Hassan then turned the screws, but Kipyegon clung to her like a limpet down the back straight as the Dutchwoman stretched out her legs for the run home.

As they entered the final straight Kipyegon kicked hard, dashing past her rival and sprinting down the straight to win the race and pick up immense confidence ahead of the Tokyo Olympic Games.

Meanwhile, Kiyeng beat world champion and world record holder Beatrice Chepkoech for a second time this season. The 2005 world champion beat Chepkoech during the Kenyan trials and repeated the feat in Monaco, setting up what promises to be a mega clash at the Olympics.

The two ran side by side for most of the race, taking control from the start. When it seemed that they would both be in the top two, it was now up to whoever had the most energy filled in the tank to go for the kill.

It was Kiyeng who would bolt upfront and show that she is in some good form, crossing the line in 9mins, 03.82secs while Chepkoech followed in tow at second, clocking 9mins, 04.94 seconds. Winfred Yavi, the Kenyan turned Bahraini steeplechaser finished third.

In the men’s race, the Kenyan duo of Abraham Kibiwott and Benjamin Kigen, also both heading for the Tokyo Olympics would have secured a 1-2 finish but an embarrassing mistake from the bell ringer cost them victory.

The two who were leading the race with a healthy gap between them and the third placed athlete were misled when the ringer sounded the ball in the second last lap. The two knew they were going for the final 400m and pumped up the pace with Kigen leading.

Into the last 100m, Kigen pushed really hard to secure the win in good time, but he heard the sound of the bell again. Throwing him into confusion. Kigen was spoilt between stopping the race altogether and continuing as he looked up to the sky in disbelief.

Having burnt himself down with a powerful 400m run, Kigen didn’t have enough in the tank and he gradually slowed down as he vehemently shook his head. The chasing pack led by Ethiopian Lemeche Girma passed him down, same as Kibiwott.

However, the latter felt he could still try to push for a top spot finish. He however culd not take the chase far as he came inches close to getting the first position, but the Ethiopian was already ahead into the finish line. 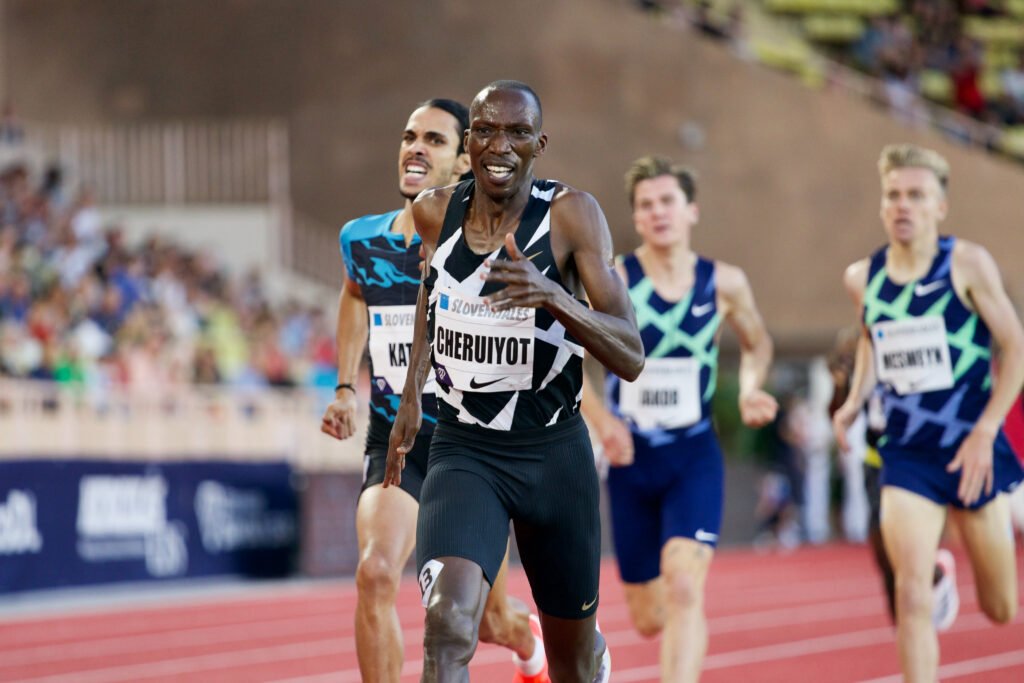 Meanwhile, Timothy Cheruiyot ran a new personal best time of 3mins, 28.28secs to win the men’s 1500m race. So fast was the race that four men all dipped under 3mins, 30secs.

Cheruiyot’s victory in the race in which he commanded from start to finish will further lift his case of being named in the Kenyan team to the Tokyo Olympics.

Cheruiyot, the reigning world champion, finished fourth at the Kenyan trials after struggling with a slight hamstring in the final 50m of the race. He thus missed an automatic place in the team.

However, he might be included if it is proved that youngster Kamar Etyang has not gone through the mandatory four doping tests as required by WADA and World Athletics before a major championship.