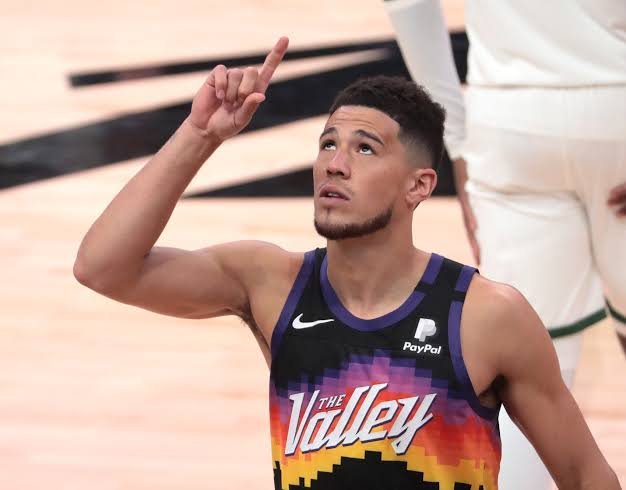 The Phoenix Suns continued their impressive run in the NBA playoffs on Sunday night against the LA Clippers in game 1 in the Western Conference Finals. Suns crushed out Clippers 120 – 114 in front of their home crowd.
Suns have now gone eight NBA playoffs matches without a loss after falling 2-1 behind to Loss Angeles Lakers in the first round. This is the Suns record in their NBA history and the first time a team has gone as many matches without a loss in the NBA since 2017 when Golden State Warriors won 15 playoff matches in a row.
Both Suns and Clippers missed their star man of the season Kahwi Leonard and Chris Paul who are both ruled out for the rest of the season due to an injury, nonetheless, each team had a player who had to stand up for the occasion. 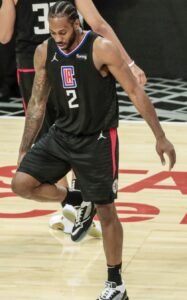 Suns Devin Booker who was going home with the going able player of the match award, scored 40 points, 13 rebounds and 11 assists in the game. Booker managed to get his first career triple-double.
Suns led the entire first half being 57-54 up at halftime before Clippers to the ok the only led they had in the game earlier in The second half going 84-78 up in the third quarter.
Drama unfolded in the last minutes of the match when the Clippers used an 8-0 run to pull a comeback of trailing 116-106 with two minutes left to within two points with slightly under thirty seconds left. However, their fate was sealed when Booker made a broken play dunk with 20 seconds left giving the suns a deserving 120-114 win in Game 1 of the conference finals. Throughout the match, Booker showed why he is being tapped as a future Hall-of-Famer by many.
Booker had almost half, 18 of his 40 points in the second half helping the suns cruise past rejuvenated Clippers in the third and fourth quarters. 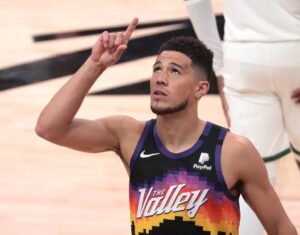 Speaking after the game last night, Booker said “I mean, it’s very special but the win feels better,”
He added, “That’s what I’m out there for the whole time, so part of the triple-double is assisted and that’s my teammates making them pay for running and doubling and seeing different types of defences.”
He also congratulated his teammates in their game 1 win saying “it takes a whole, collective team group to get what we got done tonight.”
Booker also commented on how the team has had to adjust and get used to playing without Chris Paul this offseason, “It’s tough. But we talked at the beginning of the season and said, ‘If we want to get to where we want to go, you know you’re going to have to come out of something.’ 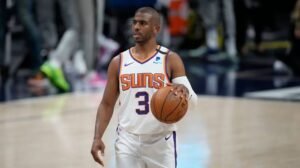 The Suns’ Chris Paul who has been sidelined better part of the postseason due to health protocols by the NBA
PHOTO: Courtesy

“It’s not going to be gravy all the way through, it’s not going to be sweet all the way through. So our job is to control the controllables. Whatever the situation is, we have to adjust to it and we have to keep playing through and keep playing hard.”
Booker is the first Suns player with a 40 point triple-double since Charles Barkley in 1993, coincidentally, the Suns won both home games exactly 120-114.
Game 2 of the 2021 western conference finals will be played on Wednesday 23 June in Los Angeles.