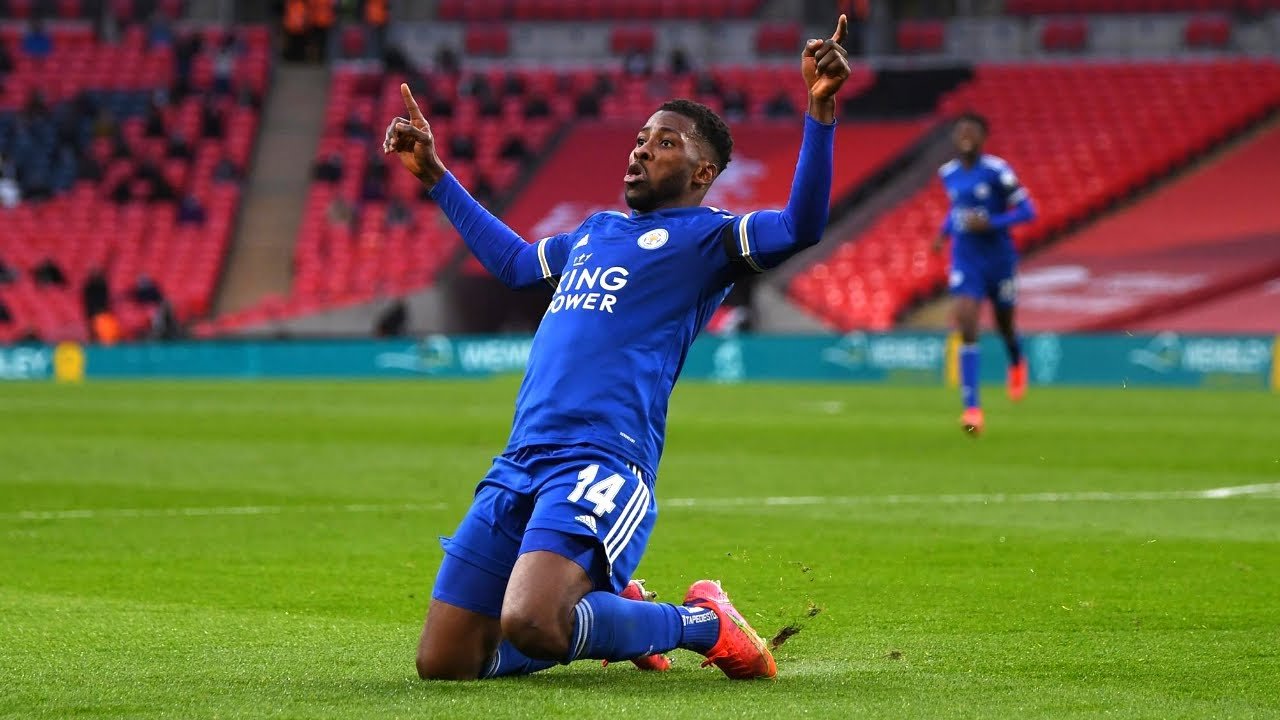 Nigerian superstar Kelechi Iheanacho has been subjected to hate and setbacks since his breakthrough season at Manchester City. He has endured relentless criticism from Nigerian media and national team coach Gernot Rohr during a patchy run of form with Leicester City.

This year among other things has been a change in fortunes following the player’s rise from vilification to being named March’s English Premier League Player of the Month. Amidst all the adulation, Iheanacho cries out for his late mother and dedicates his rebirth to the woman who gave him life.

His rich vein of form has led to an improved standing with both club and country, as well as a renaissance for the former wonderkid. For so long, it seemed like the promise that first shone at the 2013 Fifa Under-17 World Cup, where he was named Player of the Tournament, would come to naught. 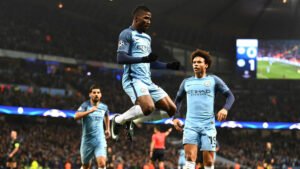 After making a splash in his first season with Manchester City as a precocious 19-year-old and earning a move to Leicester, Iheanacho found himself stuck behind Jamie Vardy in the pecking order at the King Power Stadium. While there were glimpses of his considerable ability in cameos, the forward found it difficult to put together a sustained run of form. Until now.

These days, his signature goal celebration is a much more frequent sight in Premier League grounds. “It’s a part of my life now,” he says.

“Whenever I score, I point to the sky because I know my mother is somewhere there. It’s just something that’s special for me. It is my only way of honoring her. It doesn’t matter if it’s an overhead kick, a spot-kick, a long-range or close-range effort, even a tap-in… it’s all for her.

“She’s the only constant motivation during the highs and lows, because in football people talk about memorable moments but they don’t understand the struggles.” 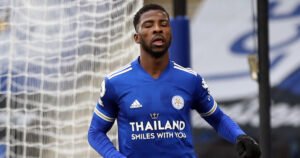 Iheanacho’s struggles came to a head when, in 2019, he was dropped from the national team. More damning, however, was the reason behind it: Rohr called his professionalism into question.

“It’s not good enough to be funny all the time,” the German coach said. “You must show that you are serious by working hard every day in the training sessions, and show that you seriously want to come back into the team at the club and also with us.”

That scathing criticism, coming as it did a few months before the Africa Cup of Nations (Afcon), was a wrench for the attacker who was excluded from the squad for the showpiece. “It broke me down,” he says.

While Nigeria battled to a third-place finish at the AFCON in Egypt, Iheanacho twiddled his thumbs back at Leicester and was the object of much ridicule, with many suggesting he had taken his eye off the ball. Through it all, he remained philosophical.

“I understood that people are not God. I cannot judge anybody for what they say to me, according to what they see in the game or what they think they know, because they are not close enough.

“Everything that was going on, it’s just part of the course of life. Everyone in life has their own way of facing trials and struggles, so that was my path. In life, people can struggle and people can go down. But what matters is how you stand up again and again when you go down. Few can understand that.”

The impact of his sideline and the hard times he faced personally to him did not affect him, he says he remained focused despite the criticism directed towards him.

“The talent there is permanent,” he explains. “But the confidence at that time… I was not playing at my club and for my country. It’s something I had to face and I had to be strong.” 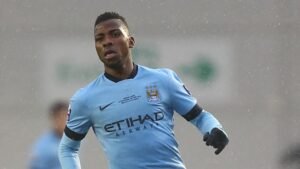 As for the specific criticism from Rohr, Iheanacho puts it down to a fundamental misunderstanding of his personality.

“Happiness is free. If you want to be happy, it’s free. I’m a happy boy; I like to be happy every single time,” he said.

“It doesn’t mean you shouldn’t be serious when you’re working, but it’s just a part of me. When I have work in front of me, I concentrate and work. I leave it all on the pitch. When I finish, I can be happy. In this life, sometimes you should not take yourself too seriously.”

As it turns out, his happy-go-lucky, upbeat persona has been a big hit at Leicester. While it would be easy to suggest that Iheanacho has benefitted from being an attacking foil for club legend Vardy on the pitch, it is very much the case that the influence flows in both directions.

Iheanacho’s natural charisma has endeared him to the Leicester dressing room and, along with compatriot Wilfred Ndidi, he has taken to releasing bits of comedy sketches from the dressing room after matches and is now addressed as “Seniorman Kelz”, a play on Nigeria street football slang. 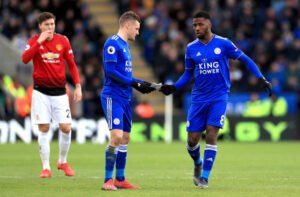 The comical post-match videos dubbed the Seniorman Kelz  series by Ndidi pay homage to illustrious compatriots of the past, insisting the very charismatic Iheanacho mimics the role perfectly in words and action.

They have even managed to rope in Vardy during some of their skits, and Iheanacho jokes that, very soon, the 34-year-old former England international will be totally comfortable with their lingo.

“Vardy is a legend in the club, and I’m just cracking him up every time. He’s happy being around me and Wilfred all the time as well, learning Pidgin.

“He’s learning pretty well, understanding some of the Pidgin we speak. He’s going to be Nigerian very soon.”

In Memory of His Mother

underneath jokes, smile and sense of humor, there is a secret anguish. Growing up, the talented youngster met with stiff, leathery opposition to his footballing dreams in the form of his father’s swift belt. James Iheanacho was keen that his son should focus on education above all else, and discouraged him from playing football.

“It makes me laugh to think about it now,” he recalls, “but he would beat me with his belt whenever he caught me playing football. It was for my own good, and that was the path God laid out for me, so I don’t hold it against him. He’s actually my biggest fan now.” 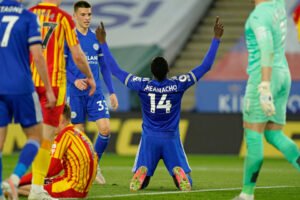 The penny eventually dropped for his father when Iheanacho starred for Nigeria at Under-17 level, and became the subject of interest from Manchester City and FC Porto. Only then did it become clear that football was a viable career path.

His mother Mercy, however, believed from the outset. “She was always by my side, from the start. She believed in me, and supported me all the way through.”

She would miss out on his big break in tragic circumstances, passing away after an illness just months before that breakout Under-17 World Cup. So it is that, for Iheanacho, his successes come with a tinge of sadness and private regret: he cannot share them with the person to whom he owes the most.

“My mom is always beside me, may her soul rest in peace. Whenever I’m playing, or even doing anything, I always imagine her beside me,” he says, pausing for a bit to collect his thoughts.

“I’m getting emotional now because… I wish I had my mom here to celebrate with me because she’s one person in my life that… she always stood by me. It breaks my heart when I remember she is no more and she’s not even enjoying all this.

“Death is unfair. Imagine having the chance to buy her whatever she’d like to have now, take her wherever she’d love to go, yet death took her away. I wish she was here to see what her son has become. Sadly there’s no second chance to live again. But that’s how God wants it and I know she is in a good place.

The loss was a major test of Iheanacho’s mental fortitude, but he continues to let his football do the talking during the dark moments in his professional life on and off the field. The visibly emotional Nigerian paid tribute to his mother during his rewarding month of March, and it could provide a refreshing contrast to the lackadaisical persona cultivated by his critics.

“You know I had only just started playing for the Nigerian youth team when she died. When she passed away unfortunately, I had to grow up fast and not use that as an excuse to fail in life,” he added.

“I don’t think there’s anything that comes close to a mother’s love for her child, my mother was amazing and special in so many ways. She had a beautiful smile. My heart beats for that amazing sight again because in the midst of the little that life provided for us, she always sacrificed a lot to make me happy.

“She stood by me as a boy growing up with no idea what the future holds. As an African and like every mother out here, all she ever wanted was for me to be a successful child that hopefully would take good care of her in her old age when she’s elderly.

“But life has other plans. Who am I to question God? I just hope wherever she is now, she can smile back and be happy that her son is making her proud.