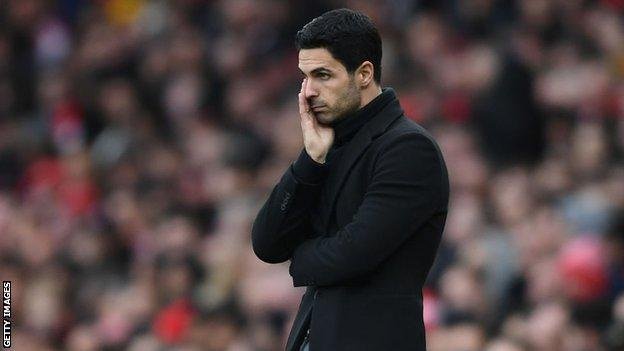 Mikel Arteta’s men Arsenal won 3:1 last night against Olympiacos taking control of their Europa League round of 16 clash ahead of their second leg at Emirates stadium in England.

The Gunners struck two goals to beat Olympiacos at home field showing their good form in Greece even as they host them next week.

Martin Odegaard’s put Arsenal ahead with the first goal but only for another defensive calamity to gift Youssef El-Arabi the equalizer just before the hour.

Arsenal were upbeat and maintained a good show on the field even though they were rocked they recovered well hitting two goals in six minutes as a Gabriel Magalhaes header and a fine strike from substitute Mohamed Elneny earned a good victory.

Manager Mikel Arteta is optimistic that this time round history would not repeat itself as they saw themselves thrown out of the competition by the same side last season at the round of 32 stage despite winning the opening leg in Greece.

Arsenal were back at the Georgios Karaiskakis Stadium for the second time in a fortnight, having hosted the ‘home’ leg of their tie against Benfica on the outskirts of Athens due to current coronavirus travel restrictions.

The Premier League side have now won more Europa League knockout stages at the home of Olympiacos than the reigning Greek champions themselves but they made it harder for themselves than was necessary.

Odegaard who was started as Arsenal number ten missed a fine chance to put Arsenal ahead at early minutes of kick off scuffing a shot wide after being picked out by Kieran Tierney.

Olympiacos were almost level as Arsenal were again caught trying to play out from the back, David Luiz’s pass being closed down by Giorgos Masouras, who then shot wildly wide of goal.

That was just a hint of what was to come as Arteta’s men would all-but present Olympiacos with their equalizer.

Just like at Burnley on Sunday, Leno played the ball short and into the feet of Dani Ceballos – fresh off the bench.

He was closed down quickly, losing possession as El-Arabi levelled with a crisp finish past an out-of-position Leno.

El-Arabi’s last-gasp winner sent Arsenal out of the competition last season and he almost doubled up for the night, only to see a shot blocked behind when well placed.

Arsenal regathered their collective poise and again began to dominate proceedings as their former defender Sokratis Papastathopoulos deemed not good enough to even be registered by the club before leaving for Greece in January led the defensive drive for the home side.

But they could not hold on to take a draw to London next Thursday as Willian collected a short corner and crossed for Gabriel to send a looping header over Sa to re-establish the lead.

Egyptian Midfielder Elneny who came off the bench curled home a low effort from outside the box and put his side firmly in the driving seat and send them into Sunday’s north London derby against Tottenham with a win.

Speaking after the match when asked about other football commentators who said Arsenal were their own enemies Arsenal Manager seemed to approve the side of the criticism saying that “They are not far off,”

“That’s really positive because the moment we stop it obviously we are going to be even stronger.

“But the reality is we have to stop it immediately because if not the games are all the time there to drop points.

“But it is my responsibility, I make them play the way we want to play. It is just understanding the risk and rewards, when they are, the balls that we have to play and, as I say before, when.

“We have to get better at that, because if not it creates tension, insecurity and it creates belief in the opponent – and it is unnecessary.”

While Arsenal were punished only once for poor defending, Arteta felt his team presented the hosts with two further chances to score and admits that needs to be addressed if they are to improve their current standing.

“We are really pleased with the result, with the goals and the way we played in big moments in the game,” he added.

“But as well, we have to be very clear an honest with ourselves. We gave three goals to the opponent, they took one and at this level they are going to punish you.

“If we want to go to the next level we have to stop doing that and be more ruthless. When you are that dominant and playing that well, just kill the game.”

With a north London derby encounter at home to Tottenham on Sunday, Arteta confirmed all of his substitutions during the game were tactical rather than due to injury.

Arsenal host their neighbours before welcoming Olympiacos to the Emirates Stadium next Thursday, with the Greek side’s head coach Pedro Martins conceding they are now huge underdogs following the late rally.

“The second goal for Arsenal was decisive,” he said.

“Of course, the situation now is not favourable for us, but we will go after our chances in the second leg and fight for the best.”