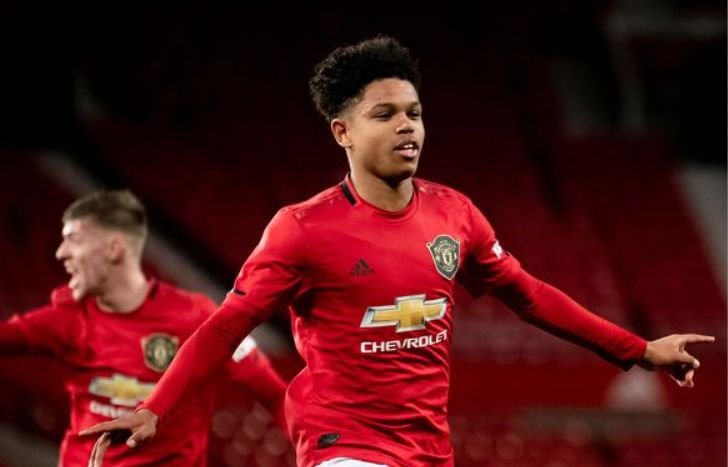 Bruno Fernandes celebrates after scoring in a past match against Real Sociedad. photo: sky sports

Manchester United had secured a 4-0 win in last week’s first leg in Turin, and they were assured of progress as they headed home to host their Laliga side Real Sociedad in the return leg at Old Trafford.

Manchester United and Real Sociedad played out a goalless draw in their return leg at Old Trafford but the Thursday night football will go down in history after the record-breaking introduction of teenager Shola Shoretire.

Shoretire made his debut as a substitute in the last Manchester United match against Premier League side Newcastle on Sunday which United won 3:1. Shola Shoretire late introduction to the European competition is historical as he replaces Norman Whiteside as the youngest player to represent United in European competition by coming on aged 17 years and 23 days.

Speaking after the game Manchester United Coach hailed the teenager for his performance saying that Shola was a good player who needs to be with the best Football individuals.

“Shola is going to be a good player for us and sometimes you need to test them against good players,” Solskjaer said. “We knew Real Sociedad are a good team with good individuals and they press.

“We felt today Amad Diallo he had to come on, of course, Dan James had to come off and Shola, the two of them will need these little introductions to this type of level.

“He’s a young kid that we believe in. Great attitude.

“You can see the shape of him. We think physically he’ll be an athlete and technically very, very good. Makes good decisions.

“So, of course we’re going to gradually feed him into this team and, you know, he’s grounded, got his feet firmly on the ground and he works really hard in training.

“Very likeable boy that we hope we can see loads of in the future.”

It was a memorable moment towards the end of a largely forgettable second leg. Sociedad skipper Mikel Oyarzabal missed an early penalty before stand-in United captain Bruno Fernandes hit the crossbar, with Modibo Sagnan hitting the woodwork shortly after half-time.

United cemented their place after the 0-0 draw at home to Real Sociedad, having effectively clinched the tie last week with an emphatic 4-0 win on neutral ground in Italy.

Shola Shoretire took to social media to express his excitement saying that the appearance was a proud moment for his family.

He posted: “What a feeling to make my European debut

“To become United’s youngest ever player in Europe is an incredible honor and a proud moment for me and my family! On to the next round.”