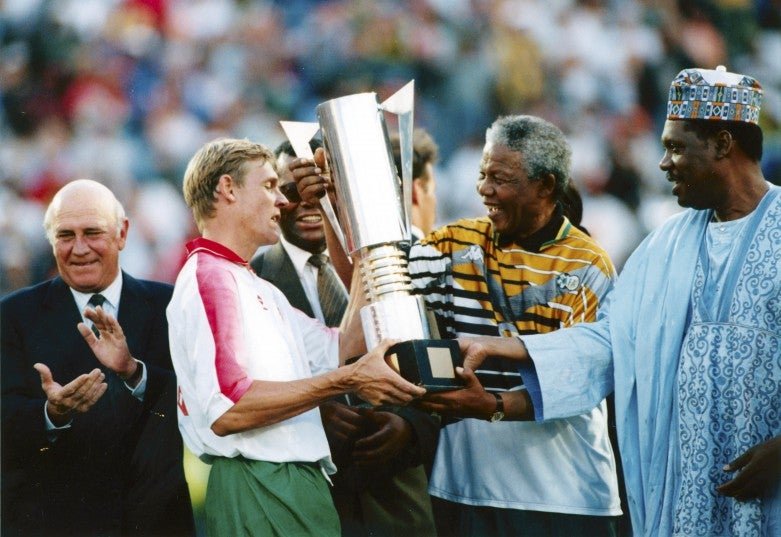 After a long period of exile, South Africa returned to continental participation, and their first-ever Africa Cup of Nations appearance in 1996 was one that will last forever in the memories of their people.

The end of Apartheid signalled the re-entry of SA sports teams back into the world arena, and much like the Springboks who went on to win the Rugby World Cup as hosts – the Nelson Mandela-inspired Bafana Bafana stood proud atop of the African football summit 24 years ago.

Bafana amazed the world at home with breathtaking, world-class, performances that were capped by winning the title in front of adoring home fans.

South Africa opened the tournament with a stunning 3-0 victory over giants Cameroon to send a warning to all the other teams in the tournament.

A 1-0 victory over Angola was followed by a 1-0 defeat to Egypt, but that didn’t stop them from reaching the next round. In the quarterfinals, they managed a hard-fought 2-1 win over Algeria to reach the semis, where they produced another amazing performance to beat Ghana 3-0.

In front of more than 90,000 supporters at FNB Stadium in Johannesburg, Mark Williams scored twice in two minutes as Bafana defeated the Carthage Eagles of Tunisia 2-0 in the final to be crowned champions in their debut appearance.

The post-match celebrations were led by Mandela who donned a Bafana jersey, much like he did the year before when he held the William Webb Ellis trophy aloft in the green Springboks shirt.