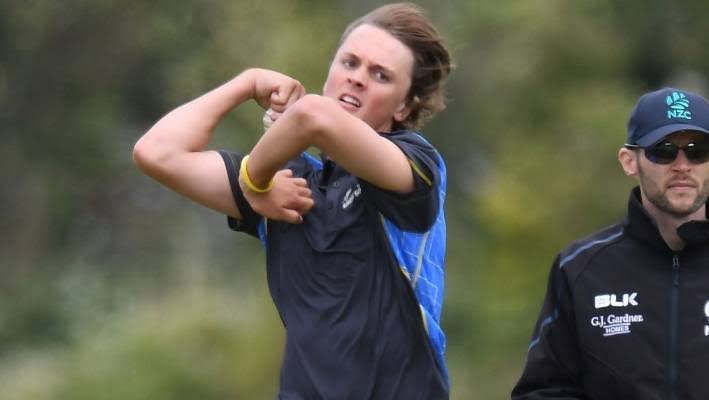 The United Arab Emirates showed exactly how much of a threat they will be in the Under-19 Cricket World Cup after upsetting New Zealand on the second day of warm-up matches in South Africa.

The two sides played out a one-wicket thriller in Johannesburg, but that wasn’t the only exciting preparation match as Bangladesh and Australia tied their game in Pretoria.

A stunning bowling performance from Charlie Peet led Scotland to victory over Japan while there was also a victory for West Indies, who beat Canada by three wickets.

The United Arab Emirates fired an early warning shot ahead of the Under-19 Cricket World Cup, beating New Zealand by one wicket in a thrilling warm-up match at St Stithians College.

Muhammad Farazuddin blazed a brilliant 37 not out off 18 balls, to take his side home in startling fashion with a 31-run partnership for the last wicket alongside Chathiyan Dashan (three not out)

The young Black Caps – seemingly set to be one of the dark horses in the tournament – had struggled for early partnerships, with wickets tumbling around opener Rhys Mariu (56).

Akasha Tahir was accurate in a new ball spell of 1/11 in four overs, and he received good back-up from the change bowlers.

It wasn’t until Beckham Wheeler-Greenall (41) and Simon Keene (40) provided some late spirit that the Kiwis had a target to defend, the innings closing on 217/9 after 50 overs.

And defend it they very nearly did, once they had breached the terrific opening pair of Aryan Lakra (46) and Vriitya Aravind (53) who notched a first-wicket stand of 92 in 22.3 overs.

When the ninth wicket fell, 31 runs were still needed off just 16 balls but Farazuddin and his powerful finish took UAE home, giving them a magnificent shot of adrenaline ahead of their tournament opener on January 18.

Bangladesh pulled off a late comeback to dramatically tie their Under-19 World Cup warm-up fixture against Australia in Pretoria.

Chasing Bangladesh’s impressive tally of 250/6 from 43 overs, the Australians were bowled out for exactly 250 when tail-ender Todd Murphy was run out by Shahadat Hossain attempting the winning run off the final ball.

Bangladesh had contained Australia thanks to a masterful bowling performance from Shoriful Islam (4/39) and Tanzid Hasan (2/27).

Shoriful was key as the last three wickets fell in the final 15 balls while Sam Fanning (46), Corey Kelly (44) and Lachlan Hearne (41) top-scored for Australia.

Bangladesh, having elected to bat, saw three players post half-centuries with Parvez Hossein Emon, Tawhid Hridoy and Shamim Hossain all scoring well in a match reduced in overs due to inclement weather.

Shamim’s top score of 59 not out off 33 balls contained three fours and three sixes.

A remarkable spell of bowling by Charlie Peet saw Scotland overwhelm newcomers Japan by 256 runs in their warm-up match at St John’s College.

Scotland won the toss and elected to bat first, amassing a total of 325 all out, in 47.2 overs.

Much of that was down to a second-wicket partnership of 126 between Tomas Mackintosh (103 retired) and Ben Davidson, who weighed in with 75.

In reply, Japan were still getting to grips with the novelty of bouncy turf wickets, struggling to play their natural game and being bowled out for 69.

Captain Marcus Thurgate was the only real resistance for the young Japanese side, with a determined 33 from 47 balls.

Beyond him, however, the Scottish attack heaped on the pressure, with the ten wickets falling for just 24 runs.

Peet’s accurate slow bowling proved too much for the middle and lower order, and he helped himself to six wickets, conceding just two runs in 29 balls.

The match was completed with a sharp stumping from Mackintosh, off Peet, to round off a 256-run victory.